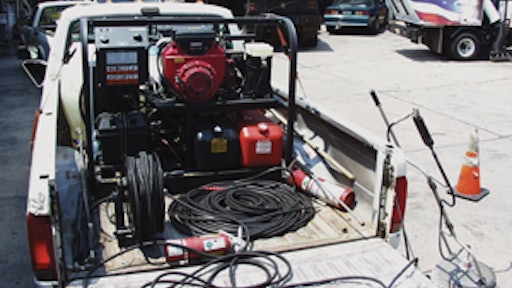 Scott Seher's nose lets him know if his pressure washing crews have returned from a night of cleaning the concrete walkways at retailers throughout southeastern Pennsylvania. When the president of Industrial Grounds Maintenance, Reading, PA, smells spearmint, the guys are back.

Chewing gum is the bane of malls and "big box" stores, the blemish on their sidewalks they loathe the most. The most cost-effective way to remove those blackened gum blobs on concrete: dissolve them with hot water under high pressure. You can't scrape them off, says James Myers, IGM's vice-president of operations. "You can do it with cold water, but it doesn't come off as quick and can damage the concrete," he says.

What shoppers spit out and stomp into a putty-like blob is steady profit for IGM, which provides exterior cleaning for over 270 malls and large stores, ranging from 40,000 to 500,000 sq. ft. of floor space, including all area Target stores.

Retailers seek curb appeal
Upscale merchants are intent on having great curb appeal. The market is full of specialized solvents and cleaning machines for gum removal, but Myers says that for exterior concrete, only a pressure washer has the dual capability to remove gum and clean the rest of the walkway.

Mostly, plaza and mall operators want seasonal or monthly washing, but a few want it more often, sometimes too often. Seher recalls how a new client, an outlet of a major national retailer, wanted its walkways pressure-washed every day. This was on new concrete, and Seher counseled that daily washing would erode the surface prematurely with little aesthetic gain.

"We are extremely honest. This is Pennsylvania Dutch country. I'm also of German heritage, and I don't care whose money it is, wasting money is wasting money," Myers says. "I'll tell a customer, 'We can't pressure wash these sidewalks because they're so beat up. Even if we back off the pressure it's still going to be blowing it apart. Why not fix the sidewalks and then we'll dress them up.'"

For Seher, the pressure washing is "nice gravy money to supplement our revenues." IGM's bread and butter is power sweeping parking lots and roadways, but it also offers pressure washing, paving, sealing, striping, road repair, and snow removal. Many customers would rather deal with one contractor than several. IGM subcontracts paving, but assumes responsibility for getting the job done right. It used to subcontract pressure washing, too, but brought it in-house and began growing the business.

Part of IGM's success with pressure washing comes from buying high performance equipment and deploying it for maximum productivity. IGM's mainstay pressure washers are a pair of truck-mounted Karcher HDS 5.5/35. Each has a 20-hp gasoline engine, variable pressure up to 3,500 psi, 5.5 gpm throughout, and the capability to heat water up to 285°F. A rotary hard surface cleaning attachment is used for speed and uniform cleanliness along with a turbo nozzle for clearing off any gum the rotary cleaner doesn't. No special detergents or solvents are required. Each of IGM's pressure washers has an external 200-gal. water tank. For large jobs, IGM will send a pickup truck with a 450-gal. tank with a transfer pump to jitney water from the building's water supply to the pressure washer, saving hours.

"We used to run hundreds and hundreds of feet of hose and at the end of the night you're all done, you're ready to go home, and now you've got 800 ft. of hose to wind up," says Myers.

Seher adds that by having the proper mix of equipment IGM can be extremely productive. "It's all about saving time: the sidewinders (rotary attachments), the extra tank, the powerful machines. Instead of taking two nights for a big job, we get in and out in one night," he says.

Really fast payback
The setup is so cost-effective, Seher estimates the power washers pay for themselves after just weeks on the job. With tune-ups before and after the washing season (late April through November) as well as a mid-season oil change, they should have a long working life - 20 years or more would not be unusual.

This investment in high performance equipment also helps create a fire wall around IGM's pressure washing business. While the high capital costs of even used equipment may discourage some from starting sweeping or paving businesses, pressure washers are democratic. Anyone can walk into their local "big box" store, buy a cold-water washer for less than $1,000, and go into business washing houses, cars, or shopping malls. Seher says some of these new entrants will offer very low prices, but IGM, as the market leader in southeastern Pennsylvania, doesn't let others dictate its price point.

"We're never the cheapest, but we're not the most expensive either," Seher says. He recounts how three years ago IGM lost one shopping center group to a contractor with a cold-water washer with a substantially lower price. Months later, Seher dropped by one mall to check out the quality of his rival's work. All the gum spots were still there. He asked his former client if the job had actually been done, and she said, "Yes it was, and you'll have the job back next year."

Martin Wendland is with PR Toolbox, Toronto, ON, Canada; reach him at mwendland@pr-toolbox.com or by calling 416-830-8797.

Karcher's North America's new line of electric pressure washers with TruPressure deliver up to 30% more cleaning pressure than competitors, according to the manufacturer
Karcher
February 28, 2017