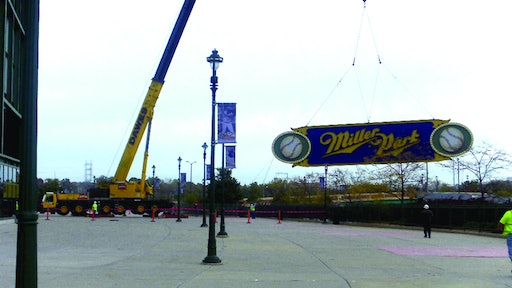 Dawes Rigging & Crane Rental lifted the 15,000-pound, 15 x 75-foot sign and its 17,000-pound steel framing from its place above the current scoreboard to make room for a new state-of-the-art scoreboard.

There are 12 ounces in a bottle of Miller Genuine Draft, and 15,000 pounds in the Miller Park stadium sign. Guess which one recently needed the services of a crane to lift it?

During this off season at Miller Park, home of the Milwaukee Brewers, a complete overhaul of the video scoreboard system has begun, starting with the removal of the familiar Miller Park sign that has been in place since the original opening day, April 6, 2001.

The $10 million project began on October 14, 2010, when a crane from Dawes Rigging & Crane Rental of Milwaukee lifted the 15,000-pound, 15 x 75-foot sign and its 17,000-pound steel framing from its place above the current scoreboard, making room for a new state-of-the-art scoreboard system that will include a built-in Miller Park sign.

Dawes, with four locations in Wisconsin, is a member of the ALL Erection & Crane Rental Corp. Family of Companies based in Cleveland, Ohio. The Miller Park project is being overseen by general contractor Mortenson Construction, with J.P. Cullen & Sons performing the installation and rigging.

Dawes’ Grove GMK 6350 all terrain crane (capacity 350 tons) was positioned in a parking lot outside the stadium for what is known as a “blind pick,” meaning the crane operator could not see the lift spot over the stadium structure. The crane, outfitted with a 196-foot boom and 62-foot jib, had to clear the 140-foot-tall center field roof of the stadium and reach 50 feet inside to the lift area, relying on riggers and the signalperson/flagger to guide the pick. The Dawes team successfully engineered the lift using the web-based 3-D Lift Plan application.

The blind pick could have been a problem, but Dawes provided the right crane for the job and an expert operator. “It’s another example of how we make projects easier for contractors and help make them more productive,” says Kirk Williams, Dawes sales representative on the project.

The new 6,000-square-foot scoreboard system in center field will become the third-largest video board in the major leagues -- and a home run over the center field wall for Dawes.

Dawes Rigging & Crane Rental, Inc. is a member of the ALL Family of Companies and an industry leader in crane rental and sales, providing superior service throughout the Midwest. The company offers manned and bare crane rental, C.C.O. certified operators, new and used equipment sales, lift planning, aerial and forklift rental, transport and heavy hauling, and 24/7 service.