Hoisting at the World Trade Center

RAXTAR hoists helps carry people, materials and tools to all floors of the new Freedom Tower while under construction 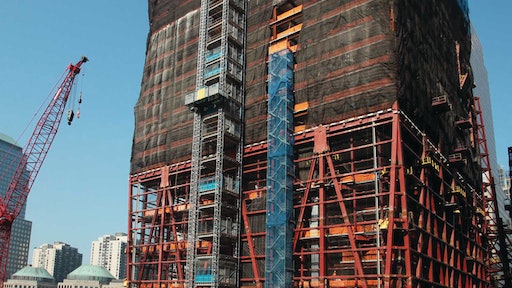 The Challenge:
Create an access solution to allow the transport or people and materials to each floor during the construction of the Freedom Tower.

The Process:
The new Freedom Tower, formerly One World Trade Center, is projected to be 1,776 ft. high. In order to move more than 1,400 people, tools and materials daily during construction, a solution had to be devised to all access to each floor during construction. The tower constructor, Tishmann Construction, had a strict set of bid criteria for the hoisting contractors on the project. A long list of concerns was developed and applied to the selection of equipment to be used. Among them was a non-counterweighted design as it related to safety and speed of erecting because this was definitely going to be considered a fast track project.

Atlantic Hoisting and Scaffolding's team led by Greg Karas had an idea to address the construction process: the common tower. A structure typically made from a 4-pole configuration of shoring and scaffolding components decked at each entry level to allow exit of the hoists and access to the building under construction to minimize the interference with the curtain wall installation. This allows the building to be closed in earlier than in conventional configurations of the Hoists. In the case of One World Trade Center, the extreme height and concern for workers safety was bringing an additional challenge to the traditional conception of the common tower.

In order to put in place an efficient solution Atlantic Hoisting and Scaffolding's team had the idea to abandon the conventional 4-pole components generally used for the common tower in lieu of actual Rack and Pinion tower sections at the four corners giving them a means for adapting mechanical access equipment to perform the construction of the platform in a safe and efficient way. The common tower is a temporary building built alongside the permanent structure. It has wind load, capacity requirements per floor and a fast tracked construction timeline much like the property under construction.

Since then, Atlantic Hoisting and Scaffolding has strategically placed 13 RAXTAR Model RX3245 hoists throughout the two side by side projects. Multiple RX3245SFT, 300-ft.-per-minute 7,000-lb. men and material hoists were designed with an overhead protection deck above the car for installer's protection from other trades who were working above them. The cars incorporated designs from the years of combined experience of Atlantic Hoisting and Scaffolding and RAXTAR engineers. A structural "common tower platform" is an integral part of the configuration of the hoisting areas which deliver thousands of men to the structure day and night for a job that has virtually not stopped for an hour since its beginning. A custom work platform designed specifically for the construction of the Common Tower Structure was built by Hydro-Mobile and is in constant use as the project climbs at a pace of one floor per week. Since its installation in November 2009, the hoists run six days a week shifts per day moving 1,300 to1,400 men and women to all the stops on its way to an overall height of 1,776 ft. where the top floor will be denoted as the 82nd floor.

Since being put in place two years ago, each RAXTAR hoists have travelled the equivalent of a trip around the world. During the last two years of use, each car ran approximately six days a week for an average of 12.5 hours a day. At a speed of 92 m/min (300 fpm), this means that each car has travelled approximately 26,718 miles or a little bit more than the earth's circumference.

It is expected that three additional years of use should be required before the project is completed.

This is the official launch of IPAF's app, leading off in the UK and Ireland, with the next phase rolling out in other territories and languages in the coming months.
International Powered Access Federation (IPAF)
June 3, 2021
Follow Us