Construction workers placed the final structural steel beam atop the plant, which is designed with strict seismic criteria to help protect the facility and airport utilities during an earthquake. 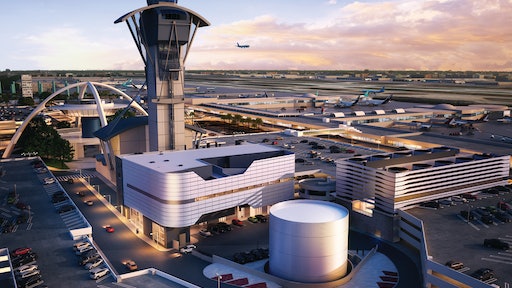 A rendering of the $438 million (development cost) design-build replacement Central Utility Plant project at Los Angeles International Airport, which is being built by Clark/McCarthy, A Joint Venture.

In just four weeks, construction workers from Schuff Steel used a Manitowoc 999 Lattice-boom crawler crane with a reach of 140 feet to erect 1,400 tons of structural steel, creating the frame for the new CUP. An audience of approximately 300 project stakeholders and construction workers celebrated the ‘topping out’ during a ceremony held near the construction site.

As a part of the event, attendees signed the final I-beam adorned with an American flag and an evergreen tree. The beam was then lifted 75 feet high and attached to the top of the structure.  The tradition of attaching a tree and flag to the final structural beam has been practiced by construction workers for over 1,000 years.  The tree represents growth, life and good luck for the construction workers and the building’s future occupants. The flag is displayed as a patriotic symbol that signifies the united effort by the project team to achieve a common goal.

“An interesting aspect pertaining to the CUP structure is that it was designed as an essential facility with stringent seismic drift criteria to protect the facility during a major earthquake,” said Kevin Carpenter, design manager for Clark/McCarthy. “Furthermore, some of the cogeneration equipment that will be installed on upper floors, including the two Combustion Turbine Generators that weigh in excess of 60 tons each, requires the steel frame to be extremely stout.”

The 70,000-square-foot facility has a steel frame that weighs in excess of 1,400 tons, or 40 pounds per square foot—about 30% higher than an OSHPD hospital in California.

Out with the old, in with the new

The new CUP is being built to replace the existing 50-year old facility with a modern, state-of-the-art, computer managed utility plant providing enhanced passenger comfort and reliability of utility service and safety within the newly renovated modernized terminals at LAX. The existing CUP will service the airport throughout construction. Upon project completion, the replacement will be brought on-line and the old CUP will be decommissioned and demolished.

Serving as general contractor for the project, Clark/McCarthy’s contract includes demolition of the existing 50-year-old CUP as well as construction of a new 64,000-square-foot, steel-framed replacement CUP with a 20,000-ton cooling capacity. The project also entails the installation of  associated equipment, such as a stand-by boiler, primary and secondary chilled water pumps, cooling towers, electrical systems and switchgear.

A new maintenance shop and offices and an above-grade thermal energy storage (TES) tank with capacity for 1.6 million gallons of water and 15,500 ton-hours of cooling is also being built.  Other work includes:

Systems and their components for the new CUP were designed and constructed to achieve LEEDSilver certification from the U.S. Green Building Council.

For more information about the project and project team, visit: http://www.clarkmccarthylaxcup.com/