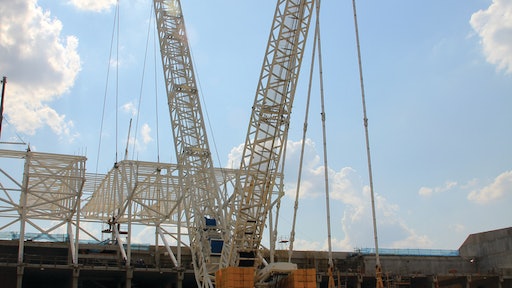 Twelve stadium construction projects are currently in progress in Brazil in anticipation of the 2014 FIFA Soccer World Cup, which takes place from June 12 to July 13, 2014. All host cities are engaged to update or establish appropriate stadium infrastructure. The technical guidelines and the required timelines for all of these projects have been issued by the Fédération Internationale de Football Association (FIFA).

Odebrecht Infraestrutura, the contractor responsible for Arena Corinthians in São Paulo, completes major projects in the transport, sanitation, sports arena and irrigation sectors throughout Brazil. It is employing more than 2,000 workers on the fixed-price, turnkey stadium project.

The Arena Corinthians is being built over a 31-month period on a total area of 239,198 sq. yds. (200,000 m²). It is located on the east side of Sao Paulo on the site of a former training center for the Corinthians, one of Brazil's most popular soccer teams, and will become the team's new home at the conclusion of the World Cup games. Its construction represents a total investment of more than BRL 820 million (US$ 396 million).

An LR 11350 crawler crane, currently the largest Liebherr crawler crane operating in Latin America, was originally brought in to put up part of the bleachers. It remains on the job for other heavy lifting duties, including placing the trusses for the stadium cover. The cover includes a 525-ft. (160 m) span without columns that represents the hardest part of the construction process. It necessitated the crane's 1,350-tonne maximum load capacity.

Because of the conventional A-frame design principle, the LR 11350 can erect main booms up to 335 ft. (102 m) in length, when mechanical outriggers are used, without the need for a derrick. With derrick system, main boom lengths of up to 492 ft. (150 m) are possible.

Oldebrecht's crews are working three shifts, six days a week to ensure the stadium is completed by the December 2013 deadline. As of October, primary construction was approaching completion, leaving the remaining time in the schedule for finish work. Once completed, the stadium will offer permanent seating for 48,000, with additional temporary seating to accommodate the up to 65,800 spectators expected for the opening match of the World Cup on June 12, 2014. It will host five more matches including one semi-final.