Clark Rigging responds to the call with the Terex AC 350/6 and AC 500-2 all terrain cranes. 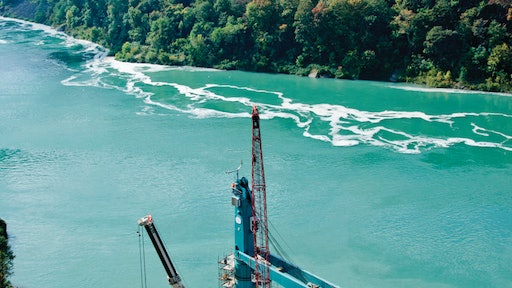 It’s not always the size, weight or volume of lifts that poses the greatest challenge for a project. Sometimes the feat is just navigating a previously uncharted territory and accomplishing the difficult task in a tight time frame. The payoff is the satisfaction of knowing that the crew overcame the challenges, built something that benefits the community and improves an old abandoned land area.

Crane Rigging and Rental Corp. of Lockport, NY, and two of its cranes, the Terex AC 350/6 and AC 500-2 all terrain, recently completed one of these jobs. The crane rental contractor was one of the first responders to help the State of New York rescue a family-run business that has thrilled countless visitors and many celebrities with the majesty of the Niagara Falls.

For more than 150 years, the Maid of the Mist ships have operated on the Niagara River Gorge. Initially, they served as ferries to transport people, cargo and carriages across the Niagara River below the waterfalls. In the modern era, the Maid of the Mist Corporation had leases in both Canada and New York to take spectators on a memorable tour of Niagara Falls. “The vessels would dock for the winter in Canada, since they had the infrastructure,” says Steve Clark, vice president of Clark Rigging and Rental Corp.

Both the corporation and New York representatives quickly searched for a suitable location to build a dry dock facility. With few viable options, the state came up with a solution that would allow it to transform an abandoned property, while enabling the Maid of the Mist voyages to continue. “They chose the site of the old Schoellkopf Power Station for the new dock,” mentions Clark. “The plant collapsed into the Niagara River Gorge in the 1950s.”

The site north of Niagara Falls had the full backing of the State for the $32 million renovation project. “We value the Maid of the Mist; we wanted to keep the Maid of the Mist here; we had a parcel we believed we could be better utilizing for the state and for tourism; and we put the two together,” said New York Governor Andrew M. Cuomo while visiting Niagara Falls, in December 2012.

Finding the site was the easy part. Building the infrastructure to support the two vessels and observation area would be the hard part. “Nothing had been done to the site since the Schoellkopf plant collapsed into the River,” mentions Clark. Melanie Parker, Sales Administrator for Clark Rigging added, “There was no access to the site for the equipment to build the harbor crane." Everything had to be lowered by crane from a cliff overlooking the gorge approximately 150 feet above the river.

Clark Rigging’s crew was first on site with its 400-ton capacity class AC 350/6 all-terrain crane equipped with its full counterweight and 210-ft main boom. Starting in May of 2013 and lasting for six weeks, the crane was the workhorse of the project, aiding with initial site clean-up efforts. “We averaged 75 picks a day with the crane, lowering equipment down into the gorge,” says Clark.

While the crane was lowering supplies to clear the gorge of trash and overgrowth and prepare the riverside for a new dry dock and observation area, work commenced on constructing a buck hoist elevator for a more efficient way to get workers down to the project site. Additionally, a high-capacity ringer crane was erected to lower cranes, trailers, pieces of the harbor crane and other heavy components into the project site.

Among the equipment the crane lowered into the gorge were skid-steer loaders, dozers, all terrain trucks and a 25,000-lb excavator. “We were working at about a 110 foot radius to lower material 150 feet into the gorge,” says Clark. “It’s a challenge working from that height in off-road conditions, where the terrain is not level.”

As the riverside dock area took shape and with the ringer crane in place, Clark Rigging moved out its 400-ton crane and prepared its 600-ton AC 500-2 eight-axle all-terrain crane for the next project phase, construction of the harbor crane. “The AC 350/6 was the right crane to get this project started,” says Clark. It had the capacity the company needed and offered easy set-up, even with the project’s marginal ground conditions.

By September of 2013, work had progressed to the point where Clark Rigging’s crew was on site with the AC 500-2, complete with its main boom and full counterweight to erect the 200-ton harbor crane. Boasting a short vehicle length and a 183.7-ft telescoping boom, the AC 500-2 features the largest system length that can travel at a 12-ton axle load, increasing lifting flexibility at the jobsite.

Since there were no access roads leading to the dock area, the crane was placed into the gorge from atop the cliff by the ringer crane. “It was lowered in two pieces, the main crane and the boom,” says Clark. “The counterweight was lowered two at a time.”

A 90-ton capacity, 58-ft spreader beam was placed in a tandem lift using the AC 500-2 crane and a crawler crane. “We worked at a short 30 foot radius with the AC 500-2 crane,” says Clark. “There were no major challenges with the lifts, and we were finished with the harbor crane within two weeks.”

On November 1, 2013, the two Maid of the Mist vessels were pulled from the Niagara River by the 200-ton harbor crane and placed on their newly built dry dock at the former Shoellkopf Power Station site. The site’s two new platforms – one atop of the gorge and a second alongside the Niagara River – are now connected by a new elevator, giving pedestrian accessibility to the Niagara River Gorge, so the visitors will have a new way to experience the grandeur of this national treasure.

With a 3.5-ton lifting capacity, and a vertical reach of 56 feet, the electric SPX532 brings versatility to any indoor or outdoor project.
April 16, 2021
Follow Us