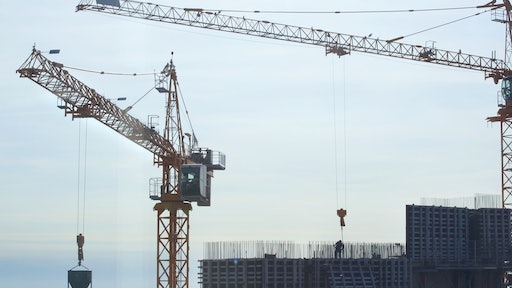 Two Potain MC 205 B tower cranes have been working up to 12 hours a day installing rebar, formwork and machinery to assist in concert pouring for the Alvear Tower in Buenos Aires.

The Alvear Tower in downtown Buenos Aires will become the tallest building in Argentina when completed later this year. Two Potain MC 205 B tower cranes and their quick line speed have been crucial to the project. In fact, they were specifically chosen to help build the 771-foot tower.

Commissioned by CRIBA, a leading contractor also based in Argentina’s capital, the Alvear Tower, a mixed-use development erected next to the shores of the River Plate, will be the second highest building in South America, and its instant notoriety demands the best construction equipment available.

Gustavo Costa, owner and president of Tecno Dealer, the Buenos Aires-based Potain distributor and rental company that sold the two cranes for the project, said quick line speed is a key factor in making sure a super tall building like Alvear Tower is completed on time and on budget.

“Operating at greater heights by the day, the line speeds of the Potain cranes are helping the contractor guarantee the project stays on schedule,” he said. “The cranes have been working up to 12 hours a day, installing rebar, formwork and machinery to assist in concrete pouring. Potain’s smooth and precise controls are contributing to the project’s success.”

The Potain MC 205 B cranes can achieve line speeds approaching 384 feet per minute. The cranes can be used in either two-fall or four-fall reeving and are ideal for high-rise buildings that exceed 656 feet in height. With 1,804 feet of rope capacity on the winch’s drum, the crane was the perfect choice for Alvear Tower.

“We help our clients pick the best equipment for their project by studying all aspects that go into the construction,” Gustavo Costa said. “Since we’re dealing with such extreme heights, we recommended Potain MC 205 Bs in two different configurations to accommodate the project’s particular demands, which far exceed those of shorter buildings.”

At the jobsite, in the heart of the upscale waterfront neighborhood of Puerto Madero, the two 11-ton capacity MC 205 Bs are positioned to operate simultaneously with their 197-foot-long jibs flying above one another. One crane is installed outside the building using 7-foot mast sections, the chosen length to optimize its rise to a final height of 853 feet. The second crane is configured for floor climbing inside the building, moving up as each floor is built.

Another important aspect considered for this project was the complete system of indicators in the Potain MC 205 B cabin, said Didier Bigay, Manitowoc’s tower crane regional sales manager for South America.

“From the seat, the operator has control of the radio, load size, hook height and access to wind speed and other data to fully control the crane operation,” he explained.

After construction is completed, the MC 205 B installed outside the building will help with disassembling the floor-climbing tower crane. Due to their final heights, it’s the most practical choice as opposed to using a mobile crane from the ground, according to Tecno Dealer. For the dismantling of the second crane, the operation is somewhat less demanding: the crane’s mast is lowered to the point where a smaller mobile crane on the ground can complete disassembly.

CRIBA estimates the cost of the 174-unit, 753,500-square-foot building will reach $130 million. Depending on the floor and unit size, the sale price of residences will range from $550 to $930 per square foot. With completion scheduled for December 2015, these figures would make Alvear Tower the most expensive new building in Buenos Aires.