Skyreach will represent Hy-Brid Lifts’ full line of lifts in a rental and sales capacity. 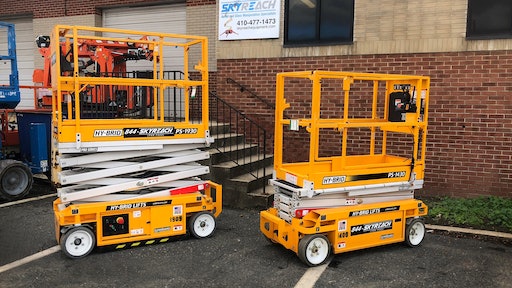 Hy-Brid Lifts has welcomed Skyreach Equipment to its Mid-Atlantic network. Skyreach will represent Hy-Brid Lifts’ full line of lifts in a rental and sales capacity.

Skyreach added PS-1930 and PS-1430 units to their fleet in May, and has since seen 100% rental utilization and customer satisfaction. Contractors in the glass and drywall industries find the machines’ electric drive, light weight, and LeakGuard fluid containment system beneficial.

“Hy-Brid Lifts was one of the first manufacturers of lightweight, compact scissor lifts,” said Kevin Gray, vice president of Skyreach Equipment. “A lot of our customers work in unique applications that require low point loads, and that’s when we knew Hy-Brid Lifts would be the perfect addition. In fact, some of our contractors were asking for them by name.”

“All of our customers have been impressed with LeakGuard,” Gray said. “Contractors working with glass, unfinished floors, and data centers all benefit from the system. We have customers working on historical buildings in downtown Washington, D.C., and Baltimore. They require a lightweight lift and a leak containment system, both of which Hy-Brid Lifts provide.”

Skyreach currently offers lifts from Hy-Brid Lifts’ Pro Series, which was recently introduced to the market. Innovative features, such as a compact and lightweight footprint and a high lift capacity, make the Pro Series ideal for industries including general construction, electrical, and other trades. Skyreach is also looking to add the new Zero-Turn Series and Push-Around Series lifts to their lineup.

“We are always pleased to see Hy-Brid Lifts being used in unique ways, making customers’ jobs easier,” said Terry Dolan, president and CEO of Hy-Brid Lifts. “Kevin and the Skyreach team are familiar with the equipment and are dedicated to understanding customers’ needs and challenges. This aligns with our priorities as a company, so we are happy to have them onboard as a dealer.”