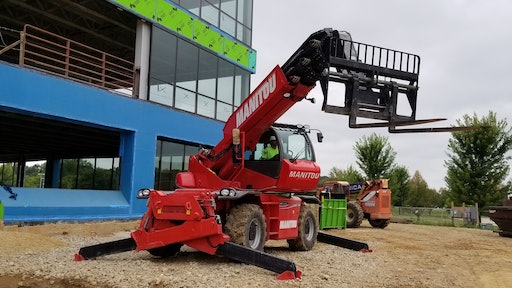 The answer is a rotating telehandler, perhaps represented best in North America by Manitou’s MRT Privilege Plus Series and its two newest models, the MRT 3050 and MRT 2470.

Manitou promotes the new machines – indeed, the entire line – as three-in-one solutions: telehandler, [crane-like] winch and mobile elevating work platform. It’s easy to be distracted, thinking about what it might cost to buy a telehandler that slews 360 degrees like a crane. But don’t overlook the amazing capacity and potential ROI of these machines.

The MRTs (Manitou Rotating Telehandlers) do their heaviest lifting from two sets of outriggers, and their ability to rotate makes it easy to pick and place loads without driving around the site. As the name suggests, the MRT's essence centers on its ability to rotate 360 degrees, much like a crane but without the need for a certified operator. Add a longer boom length and you have a machine that can do things a traditional telehandler can't.

"The MRT's ability to rotate 360 degrees, along with its longer boom length, allow it to reach areas traditional telehandlers aren’t able to," says Steve Kiskunas, product manager at Manitou, noting there's no need to move machines around on the jobsite for pick and place applications. "It's very efficient, allowing you to swing and place materials, not pick, drive and place," he says. "Put it on outriggers and you gain even more capacity."

The MRTs are powered by Mercedes Tier 4 Final engines, paired with hydrostatic transmissions. They use Manitou’s pentagonal boom design which the company says offers more precision and performance.

“The advantage of the pentagonal design is the shape of the boom keeps the boom sections straight and aligned when extending and retracting,” Kiskunas explains. “The weight of the load and the boom places pressure on the V-shaped lower channel, and this in turn forces the boom to stay straight.”

All hydraulic lines on the MRTs run along the outside of the pentagonal boom for ease of maintenance, and the chains for extension and retraction are placed in the upper part of the boom to reduce thickness and optimize reach capacity.

At 20.5 feet, the stabilizer system on the MRTs is the longest on the market, according to reports, and can detect ground pressure to alert the operator to poor ground contact.

MRT machines are compatible with a wide range of attachments, and feature the unique ability to identify the attachment being used and determine its correct capacity in any position. Using Manitou's automatic attachment recognition system, the MRT senses the exact weight of the load. Meanwhile, the Manitou load management system automatically detects the outrigger position - full, partial or none - and adjusts the load charts accordingly to alert the operator if the machine is overloaded and/or prevent the operator from moving a load into an unstable position.

In short, the MRT has taken most of the usual safety decisions and made them automatic.

According to Kiskunas, Privilege Plus MRT models can be set up to work only in safe zones. For example, he says, if there's a high power line or highway near the jobsite, the operator can set areas where the machine will not operate.

Understand that rotating telehandlers look a lot like their conventional cousins, but they're different. In simple terms, rotating telehandlers act like cranes in that they have a house that continuously spins 360 degrees, enabling the unique pick and place capability that is the hallmark of this class of equipment. The rotating house sits atop a four-wheel-drive chassis where the engine, travel system, outriggers, fuel and hydraulic tanks are located for easy access.

Manitou's line of rotating telehandlers is growing and gaining momentum here in North America, but there remains a lot of runway toward customer adoption.

"Over 1,000 MRT units are sold annually in the global market, and a majority of that volume has been in Europe,” says Kiskunas. “There is an opportunity to reach similar levels in North America as contractors begin to see more applications for rotating telehandlers. As a market leader for a number of years, Manitou is eager to see an increase in North American industry demands."

Tony Blum, superintendent with Iconica, a contracting firm based in Madison, WI, says the MRT 2150 meets many demands on the company's five-story building construction project located in Middleton, WI.

"We weren't sure what we were going to need for this project - a skip hoist or [the MRT 2150]," says Blum. "We chose the 3050 because it can reach the fifth story to get materials in and out. It’s certainly a piece we use a lot."

When asked how the MRT 2150 compares to conventional telehandlers, he adds, "A conventional machine wouldn't be able to do what this machine does. You would drive a conventional machine around, put the outriggers out, and it still couldn’t get to the fifth story. [The 2150] allows the machine to stay in one position and reach everything."

Blum says MRT machines feature gauges that tell the operator how high the forks are from the ground so the operator can judge where the load is. Even though there’s always someone at height directing the placement of the load, he says it gives the operator additional confidence to be able to look down at the gauge and see how high the load is, and know they won't hit side of the building.

Using a rotating telehandler is simple, he says, but only a select few workers on the job are trained to use the MRT 2150. "It's a little more difficult than a conventional machine because you're using both hands, but it is easy to get used to," he says.

At the time of our interview, Blum says the MRT 2150 had been in use on the site for three months, and it was his first experience with the equipment.

“I think it’s great to have the mobility to pick things out in various areas and not have to worry about moving the wheels," he says, noting that this eliminates a significant safety concern. "From a picking standpoint, you're not driving around, so you don't have worry about what’s behind you. And the swing radius is short, which makes a difference.”

The MRT Series can work with a wide array of attachments, including an expandable work platform designed specifically for Manitou machines.

According to Manitou Product Manager Steve Kiskunas, the platform expands to a full width of 13 feet, but folds up to a narrow width for ease of transport.

Much larger than platforms used on scissor and boom lifts, the Manitou work platform attachment offers a higher capacity - up to 2,000 lbs. - and more stability than comparable solutions because it was designed for use specifically with MRT machines. Platform capacity on scissors and booms is typically 500 or 1,000 lbs.

The "man basket" attachment is a concept that seems like a no-brainer on one hand, but which has been bogged down by regulations and design requirements on the other.

"Certain manufacturers have designed systems to allow the use of these platforms with the way the standard was written," Kiskunas explains. "This platform system was designed specifically for use with MRTs. It uses Manitou's quick attach mounting system and will only mount on Manitou products, plus it has a special electrical connection which includes an overload sensor that determines the correct capacity in the platform. The machine will stop if the platform is overloaded."

Kiskunas says the platform can rotate 90 degrees left or right using the company's radio remote control feature which allows operation of the platform, and the machine itself, from the basket or from the ground.

"You can start the machine using the remote control by pressing a button," he explains. "The joysticks control main boom operation up or down, and extend or retract. In addition to rotating the machine, you can rotate the platform as well."

This remote control feature, which comes standard on MRT machines, is designed to allow operators to reposition the platform without needing an operator in the cab waiting for instructions. Workers on the platform can control everything by themselves.

Likewise, Kiskunas says if an operator is doing something like using a truss boom to place a load up high, he or she can stand where the materials are being delivered to make sure they go exactly where they're needed.

Bob Kalhagen, president and owner of Ideal Crane Rental in Madison, WI, currently has 10 Manitou MRT models in his rental fleet, ranging from an 85-ft. model down to the 57-ft. machine. Of the 10 in fleet, eight were out of rent when we visited Ideal in August, which Kalhagen says is typical, since the machines are in high demand during the summer.

"We only rent to construction companies, so it's almost always a general contractor building a building..." he says. "We had one machine out on rent for six months, working on a burned out building, taking burned material out of windows. The MRT was the only machine that could telescope out to reach through a window."

The reason the MRT can handle unique applications is because it uses outriggers, allowing it to be much more stable, and because its house rotates like a crane, so it can be more versatile than a standard forklift. It also differs in cost, however, from convention telehandlers.

"This is 70% more," Kalhagen says of the acquisition cost over conventional models. Its versatility and high utility, however, allow Ideal to recoup the additional cost in their rental rates.

Service for the MRTs is not significantly different from other machines, explains Kalhagen. "There are a lot of electronics, that's the biggest problem," he says. "We have so much salt on the roads in the winter, it's a problem with our crane fleet too."

The MRT remains popular with renters since it gives them choices. "[Rotating telehandlers] give customers an option to do things with a forklift they couldn’t do before," says Kalhagen. "In the past they would have had to rent a crane."