Auctioneer sold approximately $3.7 billion of equipment at 339 unreserved auctions in 2011; over $1.1 billion to online bidders 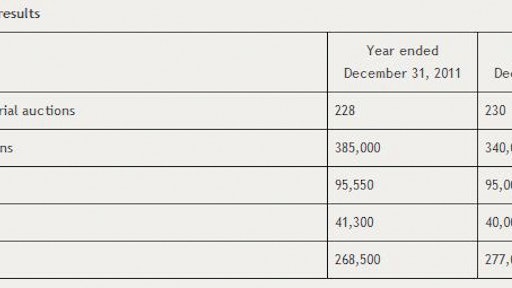 The company attracted record online bidder registrations and sold over $1.1 billion of equipment, trucks and other assets to online bidders in 2011, a 29% increase over 2010 and the highest amount ever sold online by the company in one year.

Ritchie Bros. conducted its final unreserved auctions of 2011 December 20 in Olympia, Wash., and Nashville, Tenn., and plans to release its full audited annual financial statements and Management's Discussion and Analysis for 2011 on February 28, 2012. All dollar amounts in this release are stated in United States dollars, unless otherwise indicated.

“2011 was a year of change for Ritchie Bros., with an updated strategic plan and new mission statement guiding our course. We executed very well and accomplished many significant milestones in 2011, starting with our first ever $2 billion first half in terms of gross auction proceeds," said Peter Blake, Ritchie Bros. CEO. "We also achieved significant online milestones, including more than $5 billion in lifetime online equipment sales and over $1.1 billion in annual online equipment sales. The year concluded with a company record of more than $1 billion in fourth quarter gross auction proceeds, which rounded off a year of significant achievements in a highly competitive market.

“We started the year with some lofty strategic goals and I’m very pleased with our accomplishments in our ongoing efforts to instill confidence and make it easy for our customers to buy and sell equipment,” added Blake. “We successfully introduced a range of value-added services on July 1st and have received lots of positive feedback from our customers. We now provide detailed equipment information in 21 languages on our website, so our customers feel even more confident when they bid. They have also embraced our new financing, insurance and powertrain service warranty programs.

"We move into 2012 with a focus on further extending the appeal of our auctions to existing customers and attracting new ones as we grow our business around the world. Although the world is an uncertain place right now, we believe we are delivering compelling value to equipment owners around the world and are confident that our business will continue to grow in 2012.”

Website results
The Ritchie Bros. website (rbauction.com) attracted almost 4 million unique visitors in 2011 (a 25% increase compared to last year), and they made over 10 million visits to the website (10% more than 2010). Visits from non-English speakers increased by 22% compared to 2010.

New Services
As previously announced, the Company launched a range of value-added services on July 1, 2011, including equipment financing and powertrain service warranties (in the U.S. and Canada) and insurance services (in Canada, the U.S. and Europe). Ritchie Bros. expects to complete the rollout of these services to its remaining auction locations around the world in the future.

In addition, Ritchie Bros.’ revised administrative fee structure took effect on July 1, 2011. The new fee structure eliminated certain fees and expanded the scope of its administrative fee charged to buyers to address the cost of providing the new and significantly enhanced buyer services offered at the Company’s auctions, as well as other high value buyer-focused initiatives launched in recent years.

Monthly auction results now available
Starting today the Company will be disclosing monthly aggregate auction results and selected operating metrics on its website, www.rbauction.com (in the “About Ritchie Bros.” section under “For Investors”). These results include gross auction proceeds, bidder registrations, number of buyers, number of consignors and number of lots for each month beginning with January 2010. Results will be updated each month and will be available within five days after month end. Twenty-four months of historic data are available today and the Company intends to increase this to 10 years of data in early 2012.

Mr. Blake remarked: “Ritchie Bros. is committed to operating with transparency – it is a cornerstone of our unreserved auctions and helps us create value for our customers. We are now taking steps to increase the amount of information available to the investment community and other industry watchers; we want to create more transparency for this important constituency to help them better understand our business. Because we sell more used equipment and trucks than any other organization in the world, we think this information will be valuable to a wide range of industry watchers. A word of caution however: our business is seasonal and lumpy, making it extremely variable from one month to the next. Results are best analyzed on an annual or rolling 12 month basis. We urge users not to draw conclusions from our performance for any individual month.”

Dividends
Ritchie Bros. increased its quarterly cash dividend in 2011, and paid out total dividends during the year of approximately $46 million compared to $43 million in 2010.

Upcoming auctions
There are currently 87 unreserved auctions on the 2012 Ritchie Bros. auction calendar at www.rbauction.com, which commences with an auction in Las Vegas, Nevada on January 27, to be followed by a two-day auction in Houston, Texas on February 8 & 9, and a five-day auction in Orlando, Florida on February 14-18, 2012.

Established in 1958, Ritchie Bros. Auctioneers (NYSE and TSX: RBA) is the world’s largest industrial auctioneer, selling more equipment to on-site and online bidders than any other company in the world. Ritchie Bros. offers services that enable the world’s builders to easily and confidently exchange equipment. The company conducts hundreds of unreserved public auctions each year, selling a range of used and unused equipment, trucks and other assets utilized in the construction, transportation, agricultural, material handling, mining, forestry, petroleum and marine industries. Ritchie Bros. has over 110 locations in more than 25 countries, including 43 auction sites worldwide. The company maintains a website at www.rbauction.com and sponsors an equipment wiki at www.RitchieWiki.com.