Close to 50 percent of participants bidding at Ritchie Bros. auctions are bidding online in real time 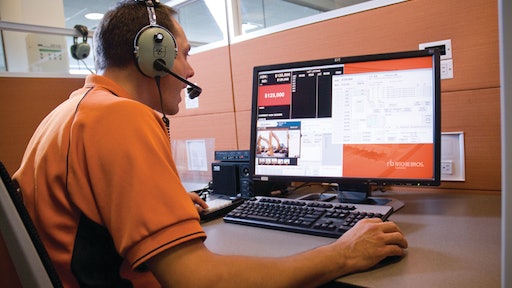 VANCOUVER, BRITISH COLUMBIA (November 3, 2011) – Ritchie Bros. Auctioneers, the world's largest on-site and online industrial auctioneer, reached and exceeded US$5 billion of online equipment sales in the fourth quarter of 2011. Ritchie Bros. hit this significant milestone on October 6, 2011, at an unreserved public auction at its auction site in Hartford, Conn.

Ritchie Bros. introduced its real-time online bidding service in March 2002 as an enhancement of the live auction experience. The usage of the service has grown steadily, and in April 2010 the company introduced online bidding in six additional languages. Today close to 50% of the people bidding at Ritchie Bros. auctions participate online in real time; the others participate in person at the auction site.

"The idea in designing the online bidding service was to give people an online experience that comes as close as possible to matching the live experience," said Bob Armstrong, Chief Operating Officer, Ritchie Bros. Auctioneers. "When you're participating online you can see the assets being sold, you can hear the auctioneer, you can see the numbers changing right before your eyes. It's as close as possible to being there without the smell of diesel."

In April 2010 Ritchie Bros. launched a new 21-language website at the Bauma trade show in Germany. The new rbauction.com features current inventory and equipment search in 21 languages, auction results in 14 languages and live online bidding in seven languages, which has opened up online bidding to an entirely new group of Ritchie Bros. customers around the world.

In July 2011, Ritchie Bros. introduced detailed equipment information in 21 languages on rbauction.com, giving customers the ability to do a virtual equipment inspection before bidding online or on-site. Equipment can also be inspected in person at the auction site. Detailed equipment information includes up to 50 high-resolution photographs of each item, allowing customers to clearly see key components of an item, along with a multi-point summary of those components and comments on basic functionality.