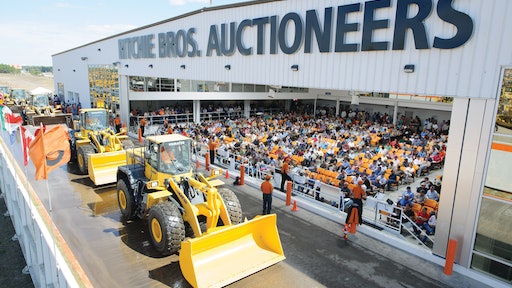 "In more than 50 years of business we have never held or seen an equipment auction of this magnitude, and we thank our customers and our staff for being part of this historic week," said Peter Blake, Ritchie Bros. CEO. "Our Orlando auction, our third industrial auction of the year, has set the stage for us to continue carrying out our mission."

There are more than 120 auctions already listed in the Ritchie Bros. auction calendar.

Established in 1958, Ritchie Bros. Auctioneers (NYSE and TSX: RBA) is the world's largest industrial auctioneer, selling more equipment to on-site and online bidders than any other company in the world. Ritchie Bros. offers services that enable the world's builders to easily and confidently exchange equipment. The company conducts hundreds of unreserved public auctions each year, selling a broad range of used and unused equipment, trucks and other assets utilized in the construction, transportation, agricultural, material handling, mining, forestry, petroleum and marine industries. Ritchie Bros. has more than 110 locations in more than 25 countries, including 43 auction sites worldwide.