Monthly Leasing and Finance Index: New Business Volume Up 10.7% from 2011 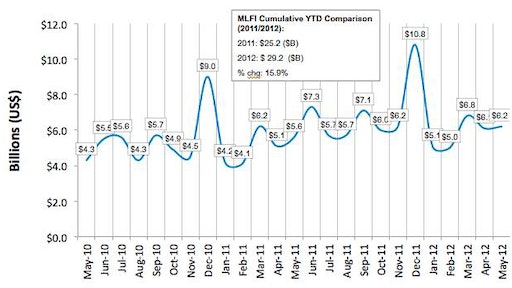 New business volume in the equipment leasing and finance industry has grown 10.7% from May 2011 to May 2012.

The Equipment Leasing and Finance Association’s (ELFA) Monthly Leasing and Finance Index (MLFI-25), which reports economic activity for the $628 billion equipment finance sector, showed overall new business volume for May was $6.2 billion, up 10.7 percent from volume of $5.6 billion in the same period in 2011. Volume was up 1.6 percent from the previous month. Year-to-date cumulative new business volume is up 16 percent.

Finally, total headcount for equipment finance companies decreased slightly from the previous month and was down 2.8 percent year over year. Supplemental data show that construction continued to lead the underperforming sectors, followed by small and medium-sized enterprises.

Separately, the Equipment Leasing & Finance Foundation's Monthly Confidence Index (MCI-EFI) for June is 48.5, down from the May index of 59.2, reflecting growing concern over the European debt crisis, U.S. unemployment and regulatory and political uncertainty.

"Overall new business activity in the equipment finance sector continues to trend positively, despite developing headwinds resulting from the Euro-crisis and its potentially negative implications for the U.S. economy," said ELFA President and CEO William G. Sutton, CAE. "Credit quality continues to show steady improvement in relation to both delinquencies and write-downs. We are hopeful that, as we move into the second half of 2012, business activity in the equipment finance marketplace continues to show steady growth amid an uncertain and restrained economic recovery."

"Demand for equipment finance has continued into the first half of 2012 with the largest spend in energy, transportation and technology," said Maureen Carr, Managing Director, Corporate Asset Finance Group, CapitalSource. "It is also encouraging to see an uptick in new equipment purchases in the manufacturing sectors. Although overall spending has steadily increased since the financial crisis, pockets of the market are still tenuous as some customers are cancelling or postponing capex purchases amidst softer commodity prices or weaker demand from abroad. As we look to the second half of 2012, we hope that growth in sectors like manufacturing and transportation offset more fickle sectors. The second half should provide growth opportunities for lenders who are relatively immune to the European crisis as many European lenders scale back their lending in the U.S. and abroad. We remain hopeful that new business volume will once again have double digit growth, credit quality continues to improve and margins remain healthy.”