The Equipment Leasing & Finance Foundation's June 2012 Monthly Confidence Index for the Equipment Finance Industry shows a drop from 59.2 to 48.5 in June 2012 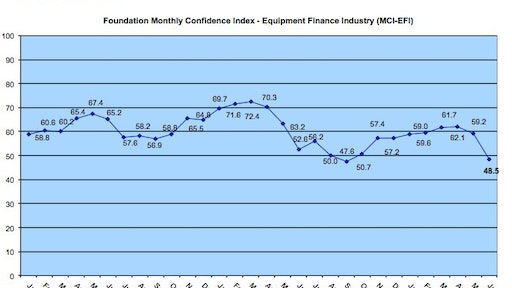 The June 2012 Foundation Monthly Confidence Index for the equipment leasing and finance industry took a big drop of 10.7 points down to 48.5.

The Equipment Leasing & Finance Foundation (the Foundation) released the June 2012 Monthly Confidence Index for the Equipment Finance Industry (MCI-EFI) today. Overall, confidence in the equipment finance market is 48.5, down from the May index of 59.2, reflecting growing concern over the European debt crisis, U.S. unemployment, and regulatory and political uncertainty.

Monthly Leasing and Finance Index: New Business Volume Up 10.7% from 2011