The A20, which is a ranking of North America’s largest aerial work platform-owning companies, saw huge gains at the top of the list while mid- to small-sized companies remained mostly still. 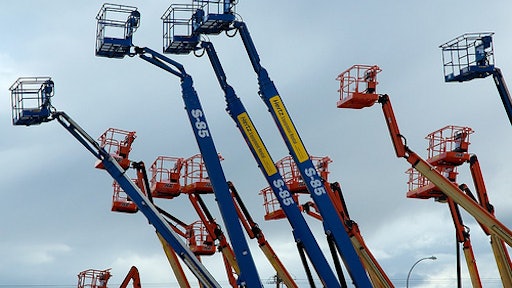 The A20, which is a ranking of North America’s largest aerial work platform-owning companies, saw huge gains at the top of the list while mid- to small-sized companies remained mostly still.

In 2011, United Rentals topped the A20 with 62,159 aerial work platforms (AWPs), and this year, the company once again tops the list with 101,829 AWPs in its fleet. Through its purchase of RSC Holdings, United added 39,670 pieces of aerial equipment (a 64% increase) which is nearly the total amount of the list’s second largest AWP-owning company, Sunbelt Rentals (34,000 units).

More growth in the top five came from Sunbelt Rentals, which saw an estimated 9% increase in fleet. Sunbelt’s rental revenues rose 17% to $436 million during the first quarter of its 2012/2013 fiscal year.

The top five spots have Sunbelt Rentals, Ahern Rentals, Hertz Equipment Rental and NES Rental Equipment Co. with gains from 2011's list, showcasing a still-recovering market. While companies are mostly refleeting, some have slight growth in their numbers and expect the remainder of 2012 to be good for business.

The report’s author, Lindsey Anderson, said, “The rest of 2012 looks good for rental while 2013 is expected to improve over 2012. After the United/RSC merger shook the industry this year, it will be interesting to see if any rental companies follow suit with similar acquisitions.”