This latest analysis complements IPAF’s release of the 2014 MEWP-related accident data and indicates that although the total MEWP rental fleet has increased in size, the fatal injury rate has fallen. 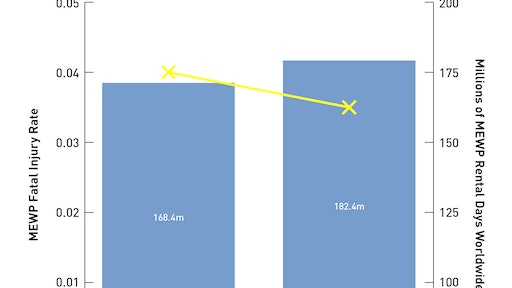 Preliminary fatal injury rate calculations confirm that mobile elevating work platforms (MEWPs) are one of the safest ways to perform temporary work at height. This latest analysis complements IPAF’s release of the 2014 MEWP-related accident data and indicates that although the total MEWP rental fleet has increased in size, the fatal injury rate has fallen.

The MEWP fatal injury rate as calculated by IPAF takes into account the following factors:

Presenting the research, Chris Wraith, IPAF technical & safety executive, noted that IPAF is calculating the fatal injury rate based on the number of MEWP fatalities worldwide against the MEWP rental fleet worldwide and estimated utilization rate, as no accurate data is currently available on the total number of end-user owned machines and their utilization rate. He said, “Comparing fatalities across the whole industry with the total fleet size will most probably bring down the fatal injury rate, so IPAF is currently taking a more conservative approach to the question, ‘How safe are MEWPs?’ and this is an initial attempt to measure and quantify MEWP safety.”

The MEWP fatal injury rate was reviewed against other relevant industry sectors. However, the research found little commonality between industries in the way that fatalities are reported or tracked. All calculations and comparisons have been checked and validated by Ducker Worldwide, a primary research-led industrial market research and consulting company specializing in construction equipment and materials.

IPAF CEO Tim Whiteman said, “We are examining the feasibility of distinguishing between accidents involving rented equipment and those involving end-user owned equipment. This groundbreaking project is helping us to create relevant safety campaigns and improve our training programs – we would welcome comments and suggestions for improvement.”

The 2014 accident figures indicate a small decrease from that for 2013, which have been readjusted upwards in the light of new information to show 68 MEWP-related fatalities in 2013. This gives a fatal injury rate of 0.035 in 2014 compared to 0.040 in 2013. Analysis of the 2014 data reveals that falls from height and overturn remain the two main causes of fatal accidents.

The accident data gathered enables IPAF to improve the content of training programs, to develop technical guidance, to target specific high-risk professions or activities, and to provide research findings used to influence standards.

All manufacturers, rental companies, contractors and users are encouraged to report any known accidents (not just fatal and serious accidents) involving MEWPs and MCWPs (mast climbing work platforms) worldwide at www.ipaf.org/accident. This information is used to make the powered access industry even safer than it is today.