Skyjack Makes a Splash With United Way in Guelph

Skyjack recently helped the United Way Guelph Wellington Dufferin kick off its 2015 fundraising campaign with a splash. On Sept. 12, United Way hosted Slide of Your Life – a 1,000 ft.-long water slide event down the middle of Norwich Street in Guelph. 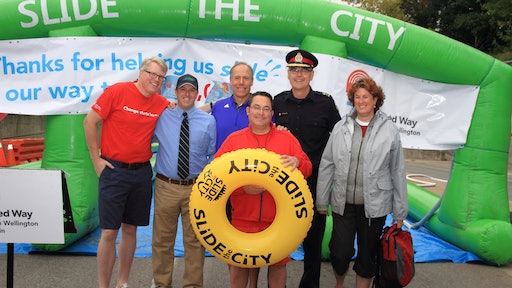 Skyjack recently helped the United Way Guelph Wellington Dufferin kick off its 2015 fundraising campaign with a splash. On Sept. 12, United Way hosted Slide of Your Life – a 1,000 ft.-long water slide event down the middle of Norwich Street in Guelph. Skyjack donated an telehandler to help expedite the slide removal from the busy downtown street.

“The Skyjack telehandler made our cleanup efforts much simpler,” said Colleen Murdoch, communications director at Untied Way Guelph Wellington Dufferin. “I don’t know if it would’ve been possible to lift the slide section with only human power. It was very nice to have the assistance.”

Skyjack donated the supply of a VR1056E telehandler to help remove the slide from the city street as part of its 30 FOR 30 PARTNERS campaign, a charity campaign honoring the company’s 30 years in business.

Time was of the essence when it came to disassembling the giant waterslide. United Way had only a short time to clear the street and allow traffic to resume in the heart of downtown Guelph. The slide was broken down into 11 pieces that were 100-ft long and weighed about 1200 lbs each. The VR1056E telehandler’s lift-ing capacity of 10,000 lbs (4,540 kg) made moving the pieces onto a trailer—one that would have taken 10 to 12 people to complete in the same time—an easy task.

“Thanks to Skyjack’s support, we were able to clear the street and reopen it for drivers in less time than anticipated,” Murdoch said.

“Even though it was pretty cold outside, the event was a blast. Everyone who attended and participated had big smiles on their faces. Not many people get the opportunity to slide down the middle of a city street,” Murdoch added.

The daylong Slide of Your Life event was an effort to raise awareness for the United Way Guelph Wellington Dufferin and kicked off their 2015 fundraising campaign. The goal is to raise $3.6 million, which will be used to fund 95 different social service programs in the Guelph-Wellington-Dufferin area. Saturday’s event helped United Way achieve their goal of raising awareness of the organization – its social media activity skyrocketed after the event.

“We’ve never seen that amount of activity on social media before,” Murdoch said.

The United Way Guelph Wellington Dufferin began in 1940 as the Guelph Community Chest for War & Welfare Services. Eventually, it became the United Way and began a social planning program to identify and respond to community needs. Now, in its 75th year of operation, the agency serves 95 local service pro-grams and has raised $48 million for the community.

Skyjack’s 30 FOR 30 PARTNERS is a global campaign aimed at supporting 30 charitable organizations through the donation of aerial work platforms. Launched in February, the program celebrates Skyjack’s 30th business anniversary and has helped build homes for those in need, restore historical buildings and maintain boats used for lifesaving purposes.

“We are very grateful for the donation from Skyjack. It made the cleanup process much easier and saved us a lot of time,” Murdoch said. “Even though the weather caused some issues, the event went was very successful and we are happy that Skyjack was able to be a part of the 2015 campaign kickoff.”