Skyjack donated $3,500 to Illinois-based Midwest K-9 Emergency Response Team, toward the purchase of a new underwater sonar and chest protector vests for the rescue dogs as part of the company’s 30 FOR 30 PARTNERS campaign. 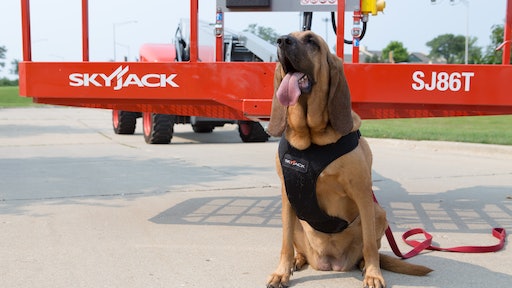 Skyjack donated $3,500 to Illinois-based Midwest K-9 Emergency Response Team, toward the purchase of a new underwater sonar and chest protector vests for the rescue dogs as part of the company’s 30 FOR 30 PARTNERS campaign, which celebrates the company’s 30th anniversary in business.

“I’d like to thank Skyjack for their support and generosity,” said Ellen Ponall, president and master trainer for Midwest K-9 Emergency Response Team. “The sonar will help us tremendously in the recovery process because it’s able to pinpoint exactly where the diver should execute the recovery. While the dog vests will prevent sticks and other debris from puncturing the rescue dogs as they conduct searches through rough forests and woods.”

The nonprofit assists law enforcement in the safe recovering of individuals mainly in Illinois, Iowa, Minnesota and Wisconsin, and relies strongly on donations from corporate sponsors and private groups.

“Once the canines have located the area of the drowned victim, the dive teams typically struggle with recovery due to very poor underwater visibility and high currents,” Ponall said. “The new sonar donated by Skyjack will provide great detail and added safety to the dive teams for recovery.”

In 2015, the team assisted in 25 search and recovery cases with a team of six volunteers and eight dogs. The nonprofit is staffed entirely by volunteers and all expenses from traveling, equipment and dog maintenance and care is funded through donations or sometimes out of the volunteers’ own pockets.

“The Midwest K-9 Emergency Response Team is constantly looking for ways to better serve the community with improved services and technology,” said Malcolm Early, vice president of marketing, Skyjack. “30 FOR 30 PARTNERS campaign was the perfect opportunity to give back and help them update to the newest sonar technology.”

Since February 2015, Skyjack has completed more than two dozen projects as part of its 30 FOR 30 PARTNERS campaign. Skyjack is supporting 30 different charitable and community-oriented projects worldwide through February 2016. So far, Skyjack has donated its machine to install beluga whale fossil at a museum in Canada, provide a multicolored makeover at a rundown site in Germany, help with inventory count at Houston Food Bank in the U.S., to name a few.

Rental company owners are transforming their business with inspection management software and these three tips for a winning strategy.
Record360
November 18, 2020
Follow Us