The membership agreement was signed by Alice Henault, director of the Loxam Access division, and Tim Whiteman, IPAF CEO, during the European Rental Association’s annual convention in Stockholm in June. 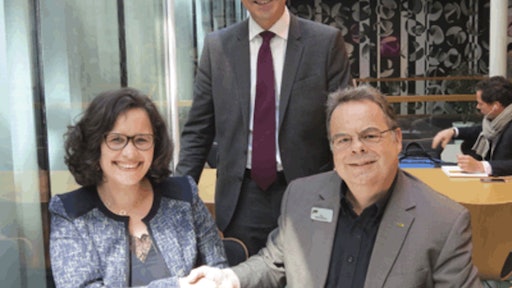 The entire Loxam Group has joined IPAF, signaling a boost for the Federation’s activities in France and around Europe.

With Loxam’s core French business joining IPAF, a total of 11 Loxam companies have become IPAF members. The subsidiaries in the UK, Ireland and the Netherlands are already IPAF members, but this is the first time that the entire Loxam Group has committed to IPAF membership.

The membership agreement was signed by Alice Henault, director of the Loxam Access division, and Tim Whiteman, IPAF CEO, during the European Rental Association’s annual convention in Stockholm in June.

Loxam Director Alice Henault said that Loxam believes it can work with IPAF and use IPAF’s safety and technical expertise to help promote safety in France.

“We see that IPAF is really helping the business in the UK and other countries where we are members,” she said. “Now is the time to be an IPAF member in France. Safety is a challenge, and it is part of our job to promote safety. We have to work with IPAF to find the best way to promote safety.”

IPAF CEO Tim Whiteman said: “We welcome the Loxam Group’s commitment to sharing experience and information from its operations around Europe within the IPAF community. Together we can help improve safety around the world.”