How Much Building 1,000 Homes Means to the US Economy

Building 1,000 average single-family homes generates 2,975 jobs and $111.0 million in taxes and fees for all levels of government 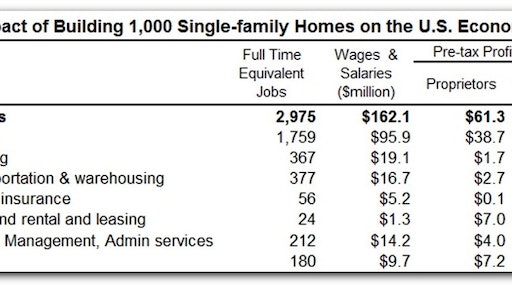 The jobs are measured in full-time equivalents (enough work to keep one worker employed full-time for a year), and are broad-based. Although a substantial share of the employment is generated in the construction industry, other jobs are created for employees in firms that manufacture building products, transport and sell those products, and provide professional services to home builders and buyers (e.g., architects and real estate agents). A breakdown by industry is shown in the tables above, along with the wages and business profits generated.

In the construction industry, the profit generated for proprietors (individuals who own their own businesses) tends to be quite substantial relative to wages and salaries. This is largely due to the profit generated for owners of the subcontracting businesses that usually handle a large share of the construction work. In some cases, the owners of these businesses perform construction work themselves. In fact, this is essentially true by definition for the many one-person subcontracting firms that populate the industry.

See NAHB’s National Impact web page for more detail and information on how the numbers are estimated. Keep in mind that all the numbers in this post are national in nature, with an emphasis on the suppliers of all the products and services that go into a new housing unit, no matter where in the country the suppliers are located. Do not try to use these national numbers to say something about economic impacts in the state or local area where the home is built. NAHB has a distinct set of Local Economic Impact estimates for that.

The Memorial Day deadline for sweeping legislation to repair our crumbing infrastructure has passed. Democrats and Republicans are still working to reach an agreement. But big differences remain, and time is short.
Jessica Lombardo
Jun 16th, 2021

The 2021 Software & Technology Special Report features wisdom and ideas from industry leaders about how to streamline your rental business by maximizing the use of your management system.
Alexis Sheprak
Jul 22nd, 2021

Putting in the time to take care of hard-working rental equipment is essential to keeping the fleet ready to rent at all times. Because, without ready, reliable and safe equipment, there simply is no rental business.
RDO Equipment Co.
Jul 22nd, 2021

Lifts For Artists, created by IronTek Solutions, provides artists and the organizations that hire them with affordable equipment rentals during the production of creative projects and cultural events.
IronTek Solutions
Jul 21st, 2021

Magni Telescopic Handlers will be available for rent and purchase at HOLT Crane & Equipment locations in Houston, Dallas, and San Antonio. In addition, Texas First Rentals has more than 20 locations that will rent and service the Magni equipment line.
Magni America LLC
Jul 21st, 2021

In this episode of Rental's The Bottom Line, Editor Alexis Sheprak talks to Marshall Shaver and Justin Kissinger from Hy-Brid Lifts about June's National Safety Month and the lessons that can come from it.
Hy-Brid Lifts / Custom Equipment LLC
Jul 20th, 2021

Sustainability, digitization, and adopting new technologies are the key to coming back from the COVID-19 pandemic, says presenters at this year’s IPAF Summit, hosted for the first time as a virtual event.
International Powered Access Federation (IPAF)
Jul 19th, 2021

We are in a new place, never going completely back to where we were. What’s missing is a sense of what behaviors have changed for good and which are likely to revert to pre-pandemic norms.
International Powered Access Federation (IPAF)
Jul 18th, 2021

In the digital age, 93 percent of customers say that their buying decisions are influenced by online reviews. And as a small business, your online reputation can directly influence your bottom line.
Pam Haskell
Jul 15th, 2021

Elevating Safety spoke to a group of experienced MEWP training and safety professionals from across the industry to provide the following summary of what constitutes quality training and evaluate its importance.
International Powered Access Federation (IPAF)
Jul 14th, 2021

In this episode of Rental Rundown, Editor Alexis Sheprak sits down with Bart DeHaven, national sales representative for KATO-CES, to talk about The ARA Show 2021.
KATO-CES
Jul 13th, 2021
Follow Us