Trump Announces US will Withdraw from Paris Climate Accord

While this is a major step that fulfills a campaign promise, Trump said the US would begin negotiations to re-enter either the Paris accord or "a new transaction on terms that are fair to the United States, its businesses, its workers, its people." 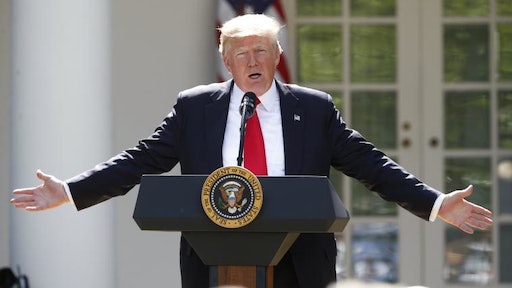 President Donald Trump Announces his decision to withdraw the US from the Paris climate accord Thursday, a major step that fulfills a campaign promise while seriously dampening global efforts to curb global warming.

The decision amounts to a rebuttal of the worldwide effort to pressure Trump to remain a part of the agreement, which 195 nations signed onto. Foreign leaders, business executives and Trump's own daughter lobbied heavily for him to remain a part of the deal, but ultimately lost out to conservatives who claim the plan is bad for the United States.

"In order to fulfill my solemn duty to protect America and its citizens, the United States will withdraw from the Paris climate accord but being negotiations to reenter either the Paris accord or an entirely new transaction under terms that are fair to the United States," Trump said from the White House Rose Garden. "We're getting out. And we will start to renegotiate and we'll see if there's a better deal. If we can, great. If we can't, that's fine," he added.

The United States was one of 195 nations that agreed to the accord in Paris in December 2015, a deal that former U.S. President Barack Obama was instrumental in brokering.

The United States had committed to reduce its emissions by 26 percent to 28 percent from 2005 levels by 2025. The United States, exceeded only by China in greenhouse gas emissions, accounts for more than 15 percent of the worldwide total.