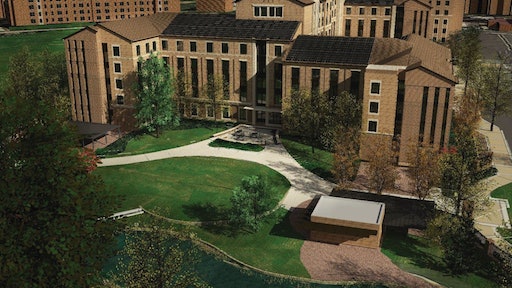 Many universities across the country are striving to design new residence halls based on the Leadership in Energy and Environmental Design (LEED) standards established by the U.S. Green Building Council (USGBC). The latest version of these standards, LEED version 4 (LEED v4), officially launched in November 2013, though projects were still able to seek certification under the previous version, LEED v2009, through October 2016.

Under the new LEED v4 requirements, some of the responsibility for achieving certification shifts from the design and construction process to the end-user and life cycle of the building. This change is requiring new training and a shift in the behaviors of students, residence life staff, maintenance, and housekeeping staff, according to the student housing design experts at KWK Architects.

“This is a new challenge where everyday student behaviors can have a quantifiable impact on the immediate environment,” said Javier Esteban, Principal at KWK Architects. “LEED version 4 places a major emphasis on sustainability education and building usage for the next generation of residence halls.”

There are four major areas where the new LEED v4 has made significant modifications:

“Under LEED v4, the performance and energy and water consumption of a residence hall is directly tied to student behaviors. For example, encouraging students in Florida to set their room temperatures to 78 degrees and adding a fan will save up to 10 percent on cooling temperature and the air movement will alleviate the sense of heat. The moisture removed from the air in order to keep the proper relative humidity inside the building can be easily reused for irrigation, the cooling tower, or greywater usage,” said Esteban.

Specific student behaviors related to sustainability can be altered through design or influenced by Resident Advisors (RA) and the university as a whole. The new LEED v4 regulations, according to Esteban, require the university’s full commitment to the LEED process.

At 201 Reserve at the University of Wisconsin Stevens Point, a central ‘recyclables only’ chute was included on every floor to encourage students to recycle. At other universities, RA communities may have a competition for a pizza night to see who can reduce their energy usage the most.

“Over the years, we have observed the trends of institutions and their full commitment to the LEED process, and the use of LEED as a guideline to set the tone for the general quality of the building. We have identified through our research which student behaviors are successful in reducing energy usage, and which ones fall flat. Listening to student input, encouraging behaviors that promote sustainability, and being committed to the entire LEED process will achieve the greatest results for universities under the LEED v4 guidelines,” said Esteban.