Crack Down on Idle Time 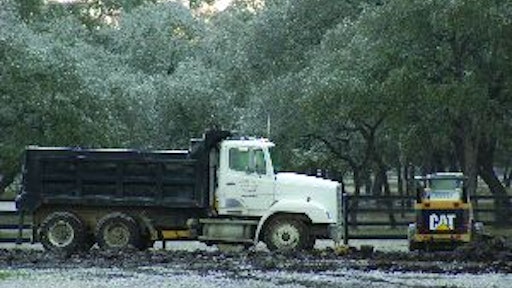 Some anti-idling laws don't make exceptions for extreme conditions. The use of aftermarket devices such as battery-based heating and/or air conditioning systems can keep drivers comfortable without the need to idle the vehicle.

Regulators are cracking down on idling trucks due to the emissions being generated. But there are good economic reasons to enforce an anti-idling policy even if it isn't required on your jobsites. While those of you working in extreme ambient air temperatures may depend on idling for air conditioning and/or heat, those in moderate climates have a lot to gain by eliminating unnecessary idle time.

There are many misconceptions - mainly that turning the engine off and restarting it several times a day will increase wear. "Starting and stopping the engine is actually easier on the engine than prolonged idling," says Brian Lindgren, vocational sales director, Kenworth Truck Co. "It is a good idea to have a good set of batteries and a high-quality starter and alternator to ensure sufficient power to start the engine numerous times if it is not run long enough to recharge the batteries."

"The fuel consumption depends on the application, load factor on the engine, etc.," Powers adds. "It is very difficult to quantify exact savings. But if you decrease your idle time from 50% to 25%, it could improve your fuel economy by up to 4%."

CARB raises the bar on anti-idling
In many areas, reducing idle time is not just a smart business practice, it is required. While many states have had anti-idling laws in place for several years, California recently modified its truck idle regulations. The modifications took effect on January 1.

California Air Resources Board (CARB) regulations apply to all diesel-fueled trucks with a gross vehicle weight greater than 10,000 lbs. "There are two major components to the California idling regulations," says Nycz. "First, engine manufacturers are required to either implement a [tamper-resistant] engine shutdown system that automatically shuts down the engine after five minutes of idling, or certify the engine to an optional NOx idling emissions standard of 30 g/hour for model year 2008 and newer on-highway engines in vehicles with GVWR greater than 14,000 lbs.," she explains.

"The second part of the regulations requires the operators to manually shut down their engines after five minutes for vehicles with GVWR greater than 10,000 lbs.," she continues. "This also affects older engines and out-of-state engines operating in California."

There are exemptions and exceptions in each of these cases. Idling is allowed for power take-off (PTO) work; adverse traffic or weather conditions; when the vehicle is being inspected or serviced; when the truck is queuing beyond 100 ft. of a school or residential area; and if it is safety related.

Automatic shutdown devices are also allowed to include reset mechanisms. "The operator's rule provides an exception from the operator shutdown requirement for vehicles that are queuing," says Siler. "The manufacturer's rule allows the vehicle operator to reset the idle shutdown timer by momentarily adjusting the position of the accelerator, brake or clutch during the 30 seconds before the automatic shutdown would occur."

But the queuing time is limited. "If the truck is waiting and they haven't set the parking brake, then the allowed idle time is 15 minutes," says Powers.

Legislation is spreading fast
The new CARB legislation already promises to spread rapidly to other regions of the country. "There are other states that are considering adoption of the anti-idling requirements," says Powers. "Some states may adopt CARB anti-idle requirements in 2009."

For example, Pennsylvania recently decided it will accept EPA-certified engines at least through the remainder of 2008, notes Powers.

The new regulations leave customers with a few choices, depending upon the states in which they operate. "Engines can be ordered to meet CARB requirements when they leave the factory," says Powers. "When customers order a truck with a 2008 model year engine, they can choose between an EPA '49-state' engine (no idle restrictions) or a CARB-compliant '50-state' engine." Caterpillar also plans to release a clean idle solution later in 2008.

Cummins will be supplying engines that are certified to the optional NOx idling emissions standard, and therefore isn't required to offer tamper-resistant automatic shutdown devices. "However, Cummins continues to offer a programmable idle shutdown feature as in the past," Nycz adds.

"For the 2008 model year, Detroit Diesel Corp. offers California-certified versions of all of our on-highway engine platforms, which will have tamper-resistant automatic shutdown systems," says Siler. Beginning in August 2008, the company plans to offer versions certified to the California optional low NOx idling standards. This will enable customers in other states to purchase the EPA-certified engines that do not have shutdown systems activated or low NOx idle calibrations.

You are not required to install any type of shutdown device on pre-2008 trucks. However, drivers will need to be trained to shut the trucks down after five minutes of idle time. Violators of the law may be fined up to $1,000 per day, and could face possible criminal charges.