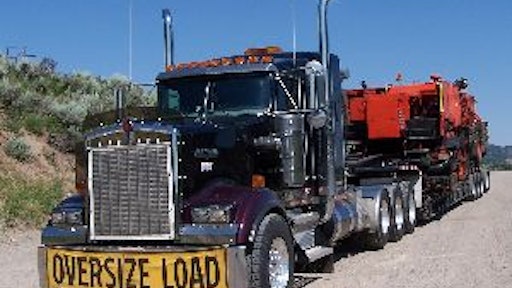 Heavy Haulers can spend extended periods pulling a heavy load up hills at slow speeds with little air circulation, so the radiator package is critical.

Heavy haulers that transport loads above 120,000 pounds gross combination weight (GCW) must carefully specify their trucks for both durability and power. The challenge is to achieve the right balance between the truck's job requirement and expected annual mileage to help produce the lowest operating cost per mile.

This year, that challenge is increased with 2010 federal engine emissions standards in the United States and Canada. When it's time to purchase new trucks, these standards may necessitate some changes to the heavy hauler's current equipment configurations.

"The extent of these changes depends upon each heavy hauler's choice between two available engine technologies, which may also affect truck performance and operating costs over its lifetime," according to Samantha Parlier, vocational marketing manager for Kenworth Truck Company.

Both technologies use EGR to circulate a portion of an engine's exhaust gas back to the engine cylinders and a diesel particulate filter (DPF) to remove particulate matter from the exhaust. A critical difference is the amount of exhaust gas that is recirculated back to the engine; the enhanced EGR approach uses a significantly higher level of recirculated exhaust gases. SCR also mixes a reactant -- most commonly a solution of urea and de-ionized water known as diesel exhaust fluid (DEF) -- with the nitrogen oxides (NOx) in exhaust gases. The exhaust then passes through a decomposition reactor, where the DEF reacts with the NOx to convert it into nitrogen and water.

Increased EGR reduces NOx by boosting the amount of exhaust gases in the engine cylinder, then slowing and cooling the combustion process and burning off pollutants. The increased heat created with the enhanced EGR approach requires greater engine cooling capacity. Increased EGR also requires more fuel to be injected into the DPF for active regenerations.

Heavy haulers rarely run trucks with engines under 15 liters. Most choose engines rated at 475 hp and 1,750 lb-ft of torque and higher. Engine cooling is always a serious consideration.

"These trucks can spend extended periods pulling a heavy load up hills at slow speeds with little air circulation, so the radiator package is critical," Parlier said. "Kenworth's 1,780 square-inch radiator -- our largest -- and wide hood for the Kenworth T800 help handle the most demanding heavy haul applications."

Parlier recommends dual, 15-inch cowl-mounted air cleaners to keep that big engine breathing easy. "These give the engine cooler more air than an under-hood air cleaner, and the 15-inch duals have four times less restriction than the typical single air cleaner," she said.

The truck's wheelbase is an especially important consideration when spec'ing a heavy hauler. Local length and weight regulations generally dictate the ideal length.

"Some states closely follow the Federal Bridge Formula, which can dictate the number of axles required and how they're spaced," Parlier said. "However, any longer-than-necessary wheelbases reduce maneuverability, which is critical for negotiating heavy haul tractors on crowded jobsites."

To haul heavy loads, frame rails typically need to be reinforced. The amount of reinforcement will depend on the truck's wheelbase and axle capacities.

"An inserted 3/8-inch frame is usually required for most heavy haul tractors, but you can get two inserts," said Parlier. "The longer the wheelbase and the more axle capacity you add, the more rigid the frame needs to be."

The rear axle ratio choice will also affect startability, but choose it carefully to ensure a good balance between cruise speed and low gearing. Parlier recommends a startability of 15 percent to 20 percent for most heavy-haul applications.

"You typically don't want to spec anything faster than a 4.11:1 ratio unless you're running a two-speed rear axle or an auxiliary transmission," said Parlier. "In extreme applications involving bridge decks or oilfield equipment, you may see ratios upwards of 10:1 or even 12:1."

For haulers running long distances at highway speeds, the ratio chosen should be as low as possible without undermining startability. "As a rule of thumb, pick the rear axle ratio for efficiency on the highway, and get the startability required from your transmission ratios," said Parlier.

Durability is another issue to consider when spec'ing the rear axles. "The 46,000-pound axles with heavy wall housings are most common for heavy haul tractors. For extreme heavy haul applications, Kenworth offers planetary axles with capacities up to 150,000 pounds," she said.

Traction needs will also dictate axle choices. "We recommend wheel differential locks or a cross lock on at least one drive axle," said Parlier. "Automatic Traction Control is an option on antilock brake systems that control wheel spin on slippery surfaces, which can be a big help when starting a load on a muddy job site."

Heavy haulers in need of pusher axles to comply with local weight and axle requirements can choose from steerable and non-steerable types. A 20,000-pound steerable is most common, but a 22,000-pound non-steerable is also available if needed. Operators who run non-steerable pushers often have to lift the pusher to negotiate corners or they end up scrubbing the tires. Steerable pushers offer the benefit of improved tire life because the axle will steer through the corner rather than scrubbing the tires. This also reduces the stress on the truck in these situations.

And fleets running lift axles may want to consider upgrading their braking system. "A four-channel antilock brake system is standard," said Parlier. "We'd recommend a six-channel system for anyone running lift axles because it will help prevent flat-spotting of the lift-axle tires."

Proper fifth wheel positioning is also critical to ensure full use of the rated capacity of all axles, especially the front. "Front axles rated at 20,000 pounds are most common. But a 22,000-pound rating is available for extra-legal loads," Parlier said.

At those kinds of ratings, heavy haulers need wide-aspect front tires not only to handle the load, but also to meet some states' tire-width requirements. The rule is typically 600 pounds per inch of tire width, but it can get as low as 500 pounds per inch width.

"Mounting 425/65R22.5 tires on the front will be good for up to 22,000 pounds on the steer axle in most states," Parlier said. "You can go to wider 445 section tires to maximize tire width and improve flotation over loose surfaces."

Some manufacturers may install a single steering gear with an assist ram. But Kenworth uses dual steering gears on front-axle ratings 16,000 pounds and above to provide among the best system the industry can offer.

Rear suspensions on heavy haulers have historically been mechanical types, but air suspensions are also popular.

"The ride is better and you have more operational flexibility," said Parlier. "By lowering the air suspension, a driver can back under and pick up a lowboy trailer instead of using skid ramps and ramming into the trailer in order to couple it to the tractor."

Kenworth offers different versions of its eight-bag air suspension to suit different applications. The AG460 is commonly used for 46,000-pound tandem axle configurations, and the AG690 can be used for tri-drive applications. The company will still mount skid ramps on the end of the frame for heavy haulers who elect to use them.

The approach to spec'ing transmissions for heavy haulers is similar to that of power: the more, the better. In this case it's ratios.

"A two-speed axle works well up to about 190,000 lbs. GCW, but above that I'd recommend an auxiliary transmission," Parlier said.

Since heavy haulers often deal with large, oversize loads, look at specifying as much glass area as possible and plenty of mirrors, Parlier said. "Four-way adjustable, cowl-mounted mirrors can be complemented with convex mirrors. The cowl mounting helps because the mirrors are not subjected to countless door slams and stay in adjustment longer than door-mounted types."

She suggests picking low-replacement cost windshields, when available. "Most vocational fleets replace at least one windshield side per truck annually. Two-piece flat-glass windshields with roped-in seals can be replaced in 30 minutes for less than a hundred dollars, which can save thousands of dollars over the truck's life," he said.

An extended day cab might be the right choice for heavy haulers that do not need a sleeper, but are still looking for a little extra room in the cab. Kenworth's Extended Day Cab enhances driver comfort with an additional 6 inches of length and 5 inches of cab height compared to its traditional day cab. And for a quieter driver's office, the QuietCab(R) sound insulation package reduces in-cab noise by two decibels.

To enhance truck productivity and the driving experience, consider adding a navigation system like the NavPlus(TM), Parlier advised. It offers true truck navigation by Garmin, communication, diagnostics, and infotainment technologies. The system is also fully compatible with the Electronic Service Analyst (ESA), a computer-base diagnostics tool, which simplifies troubleshooting.

A career in truck driving is becoming a more viable option as unemployment rates reach an all time high, but how much should you be paid? The answer varies.
Mackenna Moralez
February 18, 2021
Follow Us