Tailor Trucks for a Close Fit 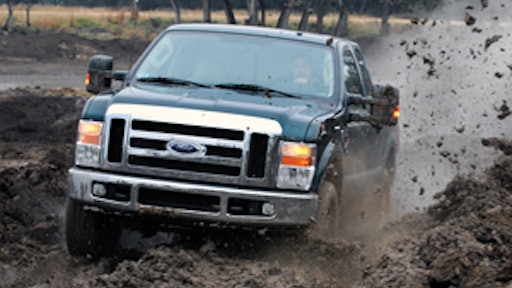 Although many pickups and chassis cabs look similar sitting on the dealership lot, there are a lot of "hidden" options that can enhance their performance in your operations.

Likewise, Ford offers many variants. "We offer more than 60 configurations of the F-150, and even more combinations of the Super Duty with F-250 to F-450 pickups and F-250 to F-550 chassis cabs," says Tom Aubrey, marketing manager, F-Series Super Duty.

But not every option adds value in every situation. "The most important options are the ones that conform to the kinds of duties that the pickup will carry out," says Kevin Mets, senior manager - vehicle development, heavy-duty Ram trucks & chassis cab programs, Chrysler LLC.

Engine options
Selecting the correct power train is one of the most crucial decisions. At the top of this list is the engine size and type.

"It all depends on the intended usage," says Mets. "For example, if hauling significant loads or frequent towing activities are part of the regular duty cycle, a larger engine helps provide more capability. Conversely, if heavy hauling and towing aren't a big part of what the truck is used for, perhaps a small V-8 engine would be a better choice. Considerations for choosing any engine include horsepower and torque requirements, fuel and maintenance costs, purchase price and potential resale value."

Tigges agrees, noting, "Key engine selection criteria include performance, fuel economy, price and resale value. Obviously, all four criteria need to be considered. Great fuel economy or great price are not enough if the engine does not have the performance to pull your trailer the way you want."

When you get into the 3/4-ton trucks and larger, you have a choice between gas and diesel engines. "Selection of a gas vs. diesel engine will depend on how the customer uses the truck, what loads they pull or carry, how many miles they drive, how long they intend to own the vehicle, etc.," says Tigges. "Typically, the higher the mileage and the greater the loads tend to favor the diesel. But each individual circumstance needs to be evaluated on its own."

Commercial customers tend to purchase pickups based on overall cost of ownership factored for the life of the vehicle, rather than monthly payments, Aubrey points out. "They choose engines based on the amount of work they can get done, and generally buy the larger engines that allow them to do more work more efficiently," he adds. "Most Super Duty customers purchase diesels (approximately 70%) because they are more capable and efficient than comparable gas engines."

The trade-offs between 2WD and 4WD must be weighed against the terrain and weather conditions in your local area. "Upfront costs will run about $3,000 higher for a 4WD on a comparable model," says Tigges. "Typically, a 2WD model will have higher fuel economy and lower maintenance costs than a 4WD."

There is no single right answer. "A contractor should evaluate what kind of conditions he or she is likely to deal with on the jobsite and make a determination from there," says Mets. "For example, conditions with limited traction, such as deep mud or snow, may make 4WD a better choice. Generally, 4WD pickups have better resale value. MSRP on a 2008 Dodge Ram 1500 SLT Quad Cab long-wheelbase 4x2 is $31,350; for a Ram 1500 SLT Quad Cab long wheelbase 4x4, MSRP is $34,770."

"The advantages of limited slip," he adds, "are the vehicle is less likely to spin an inside wheel in a turn, or get stuck at the side of the road."

The locking differentials physically lock both axle shafts together so they spin at the same speed. "It transfers the full axle torque to each wheel," says Rawlins. "They don't allow slipping between the wheels on an axle. So in conditions where you don't want a wheel to slip, like off-roading, they won't."

It's also important to choose the best rear-end ratio for your application. "Fuel economy and performance will be affected by the choice of gear ratio; however, it cannot be looked at alone," says Tigges. "Transmission gearing and engine performance also play a significant role. A deeper gear ratio (i.e., 4.10:1) will typically provide a better launch and higher towing ratings than a higher ratio (i.e., 3.73:1). However, a higher gear ratio will not always provide the best fuel economy. Heavy loads, a lot of stop-and-go driving and hilly or mountainous conditions may make deeper gears a better choice."

"In general, the lower gear ratio (4.10:1) is preferable for heavier payloads and towing," Mets adds. "The 3.73 is a higher ratio and is more suitable for light loads and applications where higher average speeds will be the norm. Lower gear ratios can result in lower fuel economy, depending on load and average speed. In general, lower gear ratios can provide more low-speed power for moving heavy loads, while higher ratios provide higher speeds with less engine RPM - at the cost of towing/hauling capability."

Another consideration is wheel size. "There are many factors for wheels and tires, including size," says Aubrey. "All other things being equal, larger tires/wheels are a bit heavier but improve handling.

Also factor in how wheel size will impact the tire dimensions. "The larger-diameter wheels generally come equipped with tires with a smaller aspect ratio - in other words, the sidewall is shallower," says Mets. "This can have an effect on ride and handling because there is less sidewall to flex. More sidewall flex may be desirable in off-road applications. Less flex may be more desirable in street applications where higher performance handling is the goal."

Built to tow
"A factory-installed towing package has the advantage of being developed specifically for a particular vehicle, taking into account the optimum combination of safety and capability," says Mets. "These packages also may include components not found in an aftermarket setup, such as a transmission cooler, higher-amp battery and integrated wiring connections. Plus, it comes factory installed, so there's no need to spend an afternoon at a shop to have a hitch added."

A towing package also makes it easier to properly equip the truck. "These packages generally include trailer wiring, a hitch platform, engine and/or transmission coolers, etc.," Tigges notes. "A customer should talk to his dealer about what he plans to tow to get recommendations on what optional equipment may be necessary."

According to Aubrey, technologies such as integrated brake controllers help give drivers confidence while towing by helping them control a trailer. Mirrors that power fold and power telescope offer convenience and add safety by helping drivers see around trailers when fully extended.

Mets agrees, adding, "Pros include increased payload capability and better stability during towing. Cons include impact on fuel economy in some circumstances, and a wider vehicle track."

Dual rear wheel trucks can often provide the necessary towing capacity without having to jump up a size class. "Most people would prefer the smaller truck that is more efficient, fits in most garages and still gets the jobs done," says Aubrey.

Other off-road considerations
If your jobsites require you to traverse rough terrain, you need to carefully examine options that will make the truck more capable in this environment.

There is a variety of equipment that may be useful, including skid plates, locking differentials, trailering/handling or off-road suspensions, recovery hooks, heavy-duty air cleaners, etc. "Options that can increase capability in various conditions are also available, including anti-spin differentials, heavy-duty cooling systems and four-wheel-drive systems," says Mets.

There are also many electronic technologies that deserve a closer look. These include hands-free communication systems using Bluetooth technology, DVD-based navigation systems and power adjustable seats.

A backup camera system can also be a useful feature. "This is helpful for backing up in tight parking lots and for lining up the truck to hitch a trailer," says Aubrey.