New MP engines usher in the future for Mack Trucks. 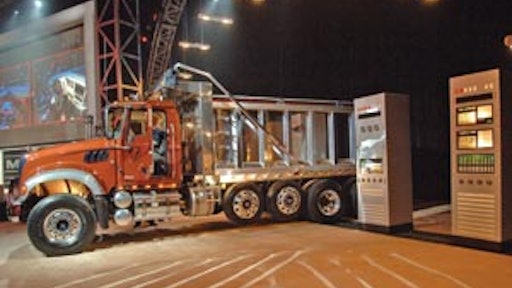 The future has already arrived for Mack Trucks as it introduced several new trucks featuring entirely new MP engines. This family of engines will take the company through the 2007 emissions regulations and beyond. "We really developed the MP for the long term," says Steve Homcha, executive vice president, Class 8 products.

The first MP engine, the MP7, will roll out in January 2006. It will be offered in the new Pinnacle highway and Granite vocational models in an EPA '04 configuration. Customers will have the choice of ordering Granite trucks with either the existing ASET vocational engines or the new MP7 powerplants. Steve Ginter, Mack vocational products marketing manager, indicated that production of the MP7 Granites is being ramped up and eventually the ASET-powered versions will be phased out.

Other benefits of the MP7 should also attract attention. "The MP7 weighs approximately 100 lbs. less than our current engines," notes Homcha.

In addition, they offer better fuel economy. "Fuel consumption reports from customers who have tested these new engines for us have been good," says Homcha. "Highway customers are seeing at least 2% to 3% improvement. Vocational customers should see substantially more."

For ease of service, the MP7 is mounted lower in the frame. Plus, its overhead cam valve train system has fewer components with fewer wear points.

The MP7 also incorporates Mack's PowerLeash engine braking technology, and has been optimized to work with both Mack Maxitorque manual and Allison automatic transmissions.

More choices
Looking toward the horizon, Mack plans to offer additional MP engines with higher displacements. "It has been a long time since Mack had more than one engine available," says Homcha.

"When you overlap power and torque curves, then you start getting into debates about what engine is really right for my application," says Homcha. "So the MP8 picks up where the MP7 left off."

Mack also made reference to an eventual MP10 that will round out its new engine family.

New trucks for new engine
An MP7-equipped highway tractor built on the Mack Advantage chassis was unveiled, called the Pinnacle. But just because the new vocational trucks are still called Granite, customers should not get the impression that Mack simply installed a new engine in an old model. The Granites with the MP7 engines are new from the ground up.

Ginter reports that one of the biggest differences customers will notice is the driving position. "The seat back position was determined by having customers sit in it and adjust it to what they felt was the proper angle. Then we designed the cab around that," he explains. As a result, the seat can recline more than 20°. "We've also provided a full wrap-around, cockpit-style dash with a very truck-like appearance that includes space for up to 25 switches — all within arm's length."

Centrally located in the trucks' instrument cluster is a driver information display offered in two versions — standard and the interactive CoPilot. Customers who opt for CoPilot can access a variety of information in Mack's new Vehicle Management and Control System (V-MAC IV). It offers hundreds of programmable features, from setting the engine fan drive override to sophisticated PTO controls.

The steering column can be placed in virtually any position, and the accelerator and brake pedals are suspended above the cab floor and mounted in line to save driver energy when braking and accelerating. An air-assisted clutch pedal minimizes driver fatigue by reducing pedal effort and travel by 2 in.

In addition to the split windshield, customers now have the option of a one-piece windshield for enhanced visibility. Three interior trim levels are available —Purebred, Pedigreed and Champion.

Mack has also moved the exhaust mounting on the new models from the back of the cab to the frame, in part to accept future emissions reduction technology.

With the Granite MP trucks, Mack hopes to further increase its leadership position in the construction sector.