Although most bodies look similar, there are differences. 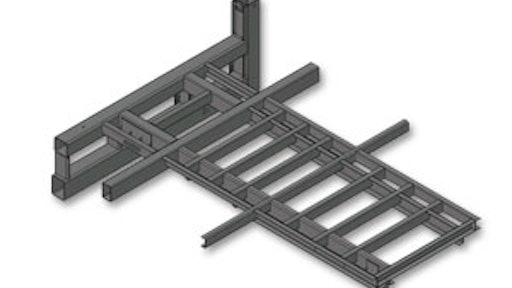 Many service body suppliers have really stepped up quality over the past several years. "There is more of a level playing field than there ever was before," says Tim Worman, product manager, Iowa Mold Tooling Co., Inc. (IMT). "If I were to line up the top five competitors, it would be really tough for anybody to say which is better."

But there are still some significant differences between the various makes of service bodies if you know where to look. Determining which service body fits best really comes down to understanding your needs. "Understand your cost of operation," advises Worman. "Understand what your replacement cycle is going to be. Look at payload requirements. Understand what you are going to lift."

You have to look at the intended life-cycle of the product. Worman says he is puzzled why some contractors go out and purchase a premium truck, then put a low-cost body on it. "Why would you do it? If I had both premium components, look at my trade-in opportunity at the end of the life, or my resale capability."

Service bodies are available in a range of price points that offer varying levels of durability and weight. "It is a durability/weight/cost trade-off," explains Jason Ollerich, Feterl Mfg. "Pick two of those. You could make the body out of aluminum and really save the weight. You would still have good durability, but you are going to be paying for it. In our case, we try to keep cost competitive and have the durability, but our weight is a little higher. We have satisfied customers who think it is worth it."

Durability is critical to ensure longevity. These bodies, when equipped with cranes, experience a lot of racking and twisting that can lead to crack formation. This movement is natural. "If you do any preventive measures to keep a body from twisting too much, you can actually induce cracking because it needs to flex somewhat," says Worman.

But it's critical to prevent stress cracks from forming and propagating in the body. "Once the body is cracked, even if you re-weld it, there is now a path for moisture to get in and you can start with some corrosion problems," says Ollerich. "You are going to have some issues at some point. It might not be right away. It might be six months down the road."

Preventing cracks is the emphasis of many premium service body suppliers. "You really can't prevent the body from moving," says Ollerich. "The question is how you do it in such a way that it doesn't cause a problem."

One solution that Feterl uses is an isolated crane mount. "We have always had a separate pedestal on our heavy-duty crane bodies," says Ollerich. "It basically goes right down to the truck frame. It is separate from the cabinets."

The substructure of the body also determines how the body will resist cracks. "You want to have a good solid frame underneath, not just a bunch of cross rails," says Ollerich.

Feterl has taken this frame one step further by sleeving its 4-in. transverse channels into its 6-in. longitudinal rails that sit on the frame rails of the truck. This lowers the body by 4 in. "It helps keep the center of gravity as low as possible."

Service Trucks International actually suspends its larger bodies. "Bodies mounted on the larger chassis use spring mounts on the front to reduce the amount of frame twist passed from the truck frame to the body due to the stiffer suspensions," says Walter VanLaren, sales/general manager. "Structural integrity and spring or rubber mounting are the main factors to look for."

IMT has taken a different approach that also emphasizes the substructure and floor of the body. Computer-generated simulations identify stresses in the body design and allow the engineers to determine where metal can be taken out and where reinforcement is needed. This led to IMT's patented inverted A-frame, which provides support where it is needed and takes material out of areas where it isn't required.

With the latest IMT service bodies, the workbench bumper size and height and depth of the compartments have been increased. Computer simulation allowed IMT to keep the weight gain down to around 50 lbs. This was done with a patented floor design. "Torsion-designed floors help with the twisting and racking by allowing the stresses to float around instead of concentrating where floor crossmembers attach to the side packs," says Worman.

Another area that is becoming better understood through simulations is how to support the door frames to prevent fractures from too much down pressure when the crane is stored.

Premium bodies are designed to resist corrosion. "The largest improvement in service bodies has been the incorporation of galvanneal steel, and the improved preparation and paint systems, that have greatly increased corrosion resistance and longevity," says VanLaren. Some steels use more galvanneal than others. "The amount can be determined by the grade, most typically A40 and A60, with A60 having more galvanneal applied to the steel than A40. So a body built with A60 galvanneal steel will have more corrosion protection than a body built with A40."

Ollerich says you can also get good corrosion resistance with thicker, non-galvanneal metals if they are well coated. "A lot of guys are using 12- and 14-gauge bodies that are galvannealed and painted. Ours is 10-gauge and then painted," he states. This approach costs a little less, but it weighs more. Corrosion has not been an issue since Feterl uses PPG's Delfleet paint system.

Aluminum can be used to both save weight and provide corrosion resistance. But not everyone is sold on the use of aluminum for crane bodies. "Aluminum bodies cannot take the loading," says Worman. "To get the structural integrity needed for crane bodies, you have to use a thicker aluminum material, which starts to mitigate weight savings. There are also cost issues."

Sealing out the elements

"Bodies flex so much when you are going down the road," says Worman. "You want to keep them as tight as you can, but it is not going to be 100%." Sealing is accomplished through ball-type weather stripping around doors, bonded washers to seal mounting holes and three-point latch mechanisms.

Maintaining the integrity of the cabinets by minimizing the number of holes used to mount accessories and components has been a major emphasis for several service body suppliers. "Service Trucks International has put significant effort into reducing the amount of holes in the top of the body by using different brackets and hardware, and has increased the sealing efforts dramatically," says VanLaren.

Likewise, Feterl has tried to minimize the number of holes it drills to mount accessories. "If we drill a hole to mount an air compressor, for example, we are doing a better job of sealing the holes to minimize the amount of water that gets into the compartment," says Ollerich.

And many manufacturers have pressurized cabinets. "Pressurized cabinets make the inside of the cabinet a higher pressure zone than the outside, thereby providing an additional barrier against fine dust and moisture getting in," says VanLaren.

"If any water does try to work its way through the door seal, the pressurization will help to blow it out," says Ollerich.

Three-point door latches offer more security. "If someone wants in your truck, they are going to get in there some way," says Ollerich. But the three-point latch makes it more difficult to get in. "If you have a long vertical door, instead of just latching on the top and bottom, it also latches in the middle of the side of the door.

"A lot of times, what can happen if you don't have that third point is you can pull the door open enough that you can maybe get at the back of the latch and get it undone," Ollerich points out. "Using the three-point latch holds that tight so you can't do that."

Latches can also help better seal the compartments. "Some new latches have hit the market, called [three-point] double latches," says Worman. "You latch the door by turning the handle and it brings the door against the weather strip. Then you close the T-handle on the latch itself and it pulls the door in even tighter against the weather strip. It is more secure and offers a better seal."

But not everyone is sold on new latch technology. "Service Trucks International has tried some of the new latches on the market, but it has found that they do not stand up as well as the all stainless-steel D-ring," claims Van Laren. The company will incorporate a new three-point latch with blind mount door handle on future models.

Many advances in wiring have increased reliability while making it easier to troubleshoot problems. One such advance is a move toward automotive wiring harnesses. "We went away from color-coded wires and hand crimping and went to automotive-style harnessing with a central control module in the operator's area," says Worman.

Hand crimping can create quality control issues. "You don't know how much hand strength the guy crimping that day had," says Worman. "It could be loose fitting. You go down the road and it comes loose and you lose your electrical."

Consistency also becomes an issue when the wiring harness is made by hand. "The other thing is, by having splices and butt connectors, if you have 10 trucks sitting in a row there is no guarantee that all 10 will be wired the same," says Worman.

Automotive wire harnesses allow the use of water-tight connectors, and they ensure all units are similarly wired. "They can only be installed one way," says Worman. "So whether it is installed at the factory or at the dealer level, they are all done the same. It protects the integrity of the harnessing."

The wiring indicates the overall quality of the body. "Low-cost manufacturers are probably not going to have the resources to have automotive-style harnesses made," says Worman. "They are probably still butt-connecting color wires together."

Choose the one that fits

All of the service body suppliers make a choice between weight, cost and durability. You have to find the body that best represents the importance you place on each of these criteria. Worman asks, "Do you want to buy something once and have it last for a long time, or do you want something that you know you are going to have to replace?" Some of the leaders in the service body industry are capable of producing bodies that can outlast two chassis.