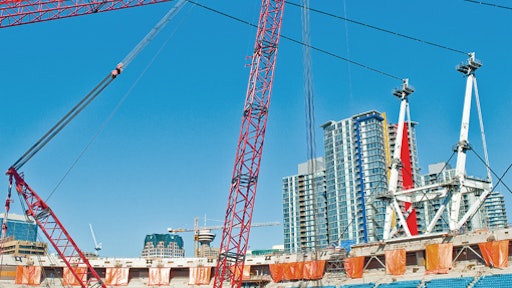 The primary crawler crane, which can lift 1,100 tons, took Triton Transport 75 trailer loads to move into the stadium and was used for the first three months of construction to assemble the 36 steel masts that support the new retractable roof.

When you're in charge of transporting cranes to install the world's largest cable-supported, retractable roof on Vancouver's landmark stadium, all eyes are on you.

That was certainly the case when the Langley, British Columbia-based heavy-haul carrier, Triton Transport Ltd., moved cranes, supplies and equipment to BC Place stadium.

"We were contracted to move a large number of specialized cranes, including one of the world's largest and most powerful ones, and drive them through a single entrance at BC Place," said Murray Scadeng, president of Triton Transport. "And we moved the primary crane, which was one of the biggest lifts in B.C. history."

The addition of the new $563 million retractable roof for the 54,500-seat stadium, which was featured prominently during the opening and closing ceremonies of the Vancouver 2010 Olympic Winter Games, started in April 2010 with the deflation of the stadium's old giant inflatable roof. Construction is expected to be completed in September 2011, with the scheduled opening on Sept. 30.

BC Place's new cable-supported retractable roof incorporates more than 35 kilometers of steel cable, 16,000 metric tons of steel and 76,000 square meters of fabric, and involves the installation of 36 masts, each measuring 50 meters in length and weighing 110 metric tons. Each pair of masts at opposite sides are connected by two 90-millimeter diameter cables and two 70-millimeter diameter cables. Strung together, the masts look like 18 independent suspension bridges resembling the form of a ring. From one end to the other, the roof masts span more than 200 meters.

"We really couldn't afford to have anything go wrong with any of the moves because dozens of contractors with hundreds of employees were waiting for us to complete them so that they could bring in their equipment and supplies and get to work," Scadeng said.

The tight turning radius and excellent visibility on the Kenworth T800s were particularly welcome when drivers navigated around the support columns of the Georgia Viaduct to get into the east entrance of the stadium, added Scadeng.

Triton's carefully planned moves for the BC Place stadium project required coordinating with the British Columbia Ministry of Transportation and Infrastructure, the City of Vancouver engineering department, and Vancouver city police to shut down traffic. The moves were completed late at night, before the morning rush hour began, so that traffic disruptions could be kept to a minimum. Delays would have caused tremendous traffic delays in an already crowded downtown.