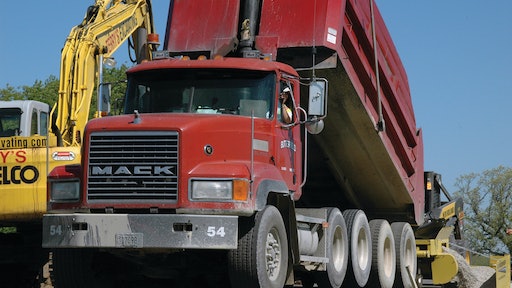 Dump truck drivers typically spend more time driving, so they need to be aware of the new penalties for diving too many hours in a day.

On December 27, 2011, the U.S. Federal Motor Carrier Safety Administration (FMCSA) announced a revision to the hours-of-service (HOS) safety requirements for commercial truck drivers, reducing by 12 hours the maximum number of hours a truck driver can work within a week. Under the old rule, truck drivers could work on average up to 82 hours within a seven-day period. The new HOS final rule limits a driver’s work week to 60/70 hours; it retains the current 11-hour daily driving limit.
The basic rule is 60 hours in seven days. “But if the company operates vehicles seven days a week, they can choose to put some or all of their drivers on a 70-hour, eight-day schedule,” explains Thomas Bray, senior editor - transportation management, J.J. Keller. Most construction operations will use the 60-hour week.
The rule will also require a 30-minute break during the first eight hours on duty. (These breaks were not formally addressed in the current rule.) Drivers cannot drive after working eight hours without taking a break of at least 30 minutes. It can be taken whenever they need rest during the eight-hour window. “There are some caveats to that such as munitions and hazmat where there is mandatory attendance — you can’t really go off duty,” says Dave Kraft, director of Industry Affairs, Qualcomm.
“The 30-minute break requirements could be disruptive in some cases where drivers spend a good deal of time getting ready to drive, finally get on the road, only to have to stop a short time later,” says Kraft. “So that could affect some drivers.”
Under the new rule, drivers are now permitted to sit in their vehicles when they are off duty. “In the trades, that is actually going to be a help,” notes Bray. “It used to be that if they sat in the vehicle it was considered on duty because they were in a commercial vehicle.”
That doesn’t mean drivers are off duty while waiting to be loaded. The driver can only be considered off duty if there isn’t any responsibility associated with the truck. According to Bray, a simply question can be used to determine off-duty status: Is the driver free to pursue activities of his or her own choosing? If so, then it can be considered off duty.

One of the most significant changes to the rule is the limitation on the 34-hour restarts. In the current HOS rule, the driver takes a 34-hour break whenever he or she initiates it. There are no limitations to how and when that is done. In the new rule, this 34-hour break (restart or reset) must include two periods between 1 a.m. and 5 a.m. based on local time.
“It may only be used once a week,” says Kraft. “You can’t take it any time you want. You have to allow seven days since the last time you started one of these.”
Many construction workers drive to the jobsite, work all day and then drive back. “If those drivers are working 14 hours per day, the restart issue is going to be a problem for them,” notes Bray. It is further complicated by the requirement that two periods between 1 a.m. and 5 a.m. must be included in the break. “It is going to be a little trickier for them to be able to get that restart if they work long hours combined with a long week.”
And don’t assume you can use the employee around the shop when their hours are up, because that still counts toward “on-duty” time. “They are going to just keep piling their hours up,” says Bray. “There is potential for some serious problems that way.”
The 34-hour reset can cause confusion or be misinterpreted. Kraft provides three examples of how it works. The first example assumes the reset occurred Saturday night. The driver was off all day Sunday and until 6 a.m. Monday morning. “The driver starts fresh Monday morning after a reset,” says Kraft. “Then the driver has a very aggressive work schedule.”
Between driving and on-duty non-driving time, he works 14 hours a day Monday through Thursday. “By Friday, after four hours of on-duty time, the driver is at 60 hours for the seven-day period and he can’t drive any further,” says Kraft. Given the seven-day requirement between restarts, he cannot begin a restart until Saturday night. “So it is 10 a.m. Friday morning and the driver has to wait to even start a reset. The best the driver can do is start driving 6 a.m. the following Monday. That is almost three days of very long reset for the driver.”
But in some cases, the reset will have very little impact. Consider an example where the driver’s work schedule is a very predictable 9 to 10 hours a day. In this scenario, the driver works six days a week. He bumps up close to the 60- or 70-hour limits, but never actually gets there.
“If we assume the driver starts at 4 a.m. every day, the driver never qualifies for the two consecutive 1 a.m. to 5 a.m. time off periods, but because he never hits the 60- or 70-hour limits he doesn’t really need to,” explains Kraft. In this example, the new 34-hour restart requirement is not applicable and the driver schedule does not need to be changed.”
Drivers with variable work schedules need to carefully plan their week. “Clearly, there is more complexity when schedules are subject to changes and much more attention will be needed for planning and monitoring driver’s weekly schedules, looking backward and looking forward,” says Kraft. “Drivers [may] hit the productive 60- or 70-hour limits well before they can restart again and drivers are going to lose productive time in some cases.”

Drivers who stay within a 100 air-mile radius have been able to operate under an exemption that allows them to merely track hours instead of keeping a log.
“To be able to use this exception, a driver must come back to the work reporting location and be released within 12 hours,” says Bray. “Many times drivers are not able to use the 100-mile exception because they are putting in too many hours in a day.”
If they are a 100-mile driver, all they must have is a record showing starting time, ending time and total hours worked. “I know a lot of construction companies that use a 12-hour limit for their drivers just for that reason,” Bray notes.
But even this approach is going to become a little more difficult. “Once this rule goes into effect, there has to be a minimum difference between the ending total and total hours worked,” says Bray. “So if the driver works a 10-hour day, his start to end should be 10 1/2 hours, allowing for the 30-minute break. Inspectors will be looking to make sure they did get a break.”

Most changes under the new HOS final rule will be effective in July of 2013. “There is a pretty good window, so there is time for planning of the impact” says Kraft.
That said, there are a couple of items in the rule that took effect almost immediately. “One took affect at the end of last month,” Kraft notes. “There was a change in on-duty time definition. In the current rule, any time you were in a commercial motor vehicle (except in the sleeper berth) you were on duty. In the new rule, drivers are allowed to rest in a parked vehicle. And co-drivers can be off-duty in the passenger seat for up to two hours in transition from/to sleeper berth for eight hours.”
In addition, “egregious violations” are now defined. “They were not defined before,” says Kraft. Companies that allow drivers to exceed the 11-hour driving limit by three or more hours could be fined $11,000 per offense, and the drivers themselves could face civil penalties of up to $2,750 for each offense.
This should not a problem for most construction vocations. “I don’t know if that is going to be too much of a concern except for the dump truck drivers who are on the road a lot,” says Bray. “The fine applies just to the driving limit. A technician who goes out may have two hours of driving. He may be over the 14-hour limit, but he only has two hours of driving, so he is not going to get hit with that one.”
The biggest issues the trades face aren’t really changing. “The biggest challenge is the 12-hour limit if they are trying to stay under the air-mile exception or the 14-hour limit,” says Bray. “At 14 hours, the driver can’t drive anymore. The driver drives to the site, works all day and now he needs to drive back, but it has been 16 hours since he left the shop. The company has to send a relief driver out to get the truck and the driver back.
“The changes in HOS don’t address the big pain points that construction companies have with the HOS regulations,” he continues. “Based on our experience, it is the hard limits. And with the changes, they now have the potential to get into trouble with the 60-hour work week. It is going to be a little more difficult with the restart rules.”
Remember, these rules were not necessarily written with the construction industry in mind. “The regulations are geared toward a person that drives,” says Bray. “In the construction trades, a majority of what you are dealing with is driving as a secondary function. They are using commercial vehicles to build something.”
Admittedly, there is a lot of confusion regarding HOS with non-transport companies. “To add to the confusion, some states give liberal exceptions to construction operations within their boundaries if they are an intrastate carrier,” Bray notes. “Different states give different exceptions. But as soon as a vehicle crosses a state line, you are now an interstate trucker and you follow the interstate rules. That is where a lot of people get confused. Federal law comes into play if you are crossing state lines or carrying a product that has or will cross state lines. The state laws may or may not be the same as the federal rules.”

Confused? You are probably in good company. Do your research to make sure you are in compliance. You can also send general questions to transporteditors@jjkeller.com.