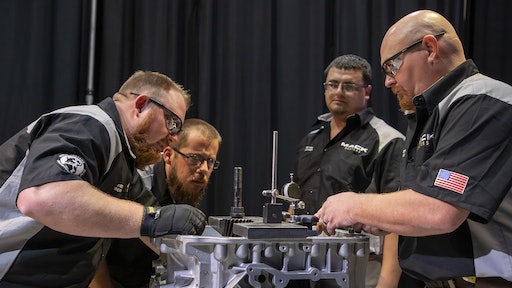 Team #Rise For The Anthem from Bruckner Truck Sales in Shreveport, LA was named champions of the 2019 Mack Masters Competition, having successfully completed several rounds of challenges designed to evaluate their knowledge of Mack service systems and procedures. Team # Rise For The Anthem’s superheroes of service are Justin Malone, Joey Wardrip, Aaron Toomer and Ted Pfister.
Mack Trucks

Mack Trucks put its service  technicians to the test in the third installment of the Mack Masters Competition, a biennial event designed to evaluate participants’ knowledge of Mack service systems and procedures. Team “# Rise For The Anthem” from Bruckner Truck Sales in Shreveport, LA successfully completed several rounds of competition, including a comprehensive final challenge, to be crowned Mack Masters Champions. Members of team #Rise For The Anthem are Aaron Toomer, Justin Malone, Ted Pfister and Joey Wardrip.

The 2019 Mack Masters Competition kicked off in November of 2018 with early rounds of online challenges that tested competitors’ knowledge of Mack’s service procedures and related systems. A record number of entrants participated, with about 2,000 individuals on more than 500 teams. After competing in three rounds of online challenges, ten teams of finalists were named, each representing one of Mack’s sales and service regions: Central, Northeast, Southeast, Southwest and West for the U.S., plus Canada, Mexico, Peru, Latin America, and – for the first time ever – an apprentice team of individuals new to their job roles.

The finalists’ knowledge and skills were challenged with five hands-on stations designed to challenge each team with a specific service situation that had to be completed in just 30 minutes. Following the completion of a challenge, teams rotated to the next one until all five were completed. Team results from all stations were tallied to determine the champion.

The Mack Masters Competition is organized and conducted by the Mack Trucks Academy, which is responsible for developing and implementing Mack service training and aftermarket support programs. The academy is accredited by the National Institute for Automotive Service Excellence (ASE) for Continuing Automotive Service Education (CASE).