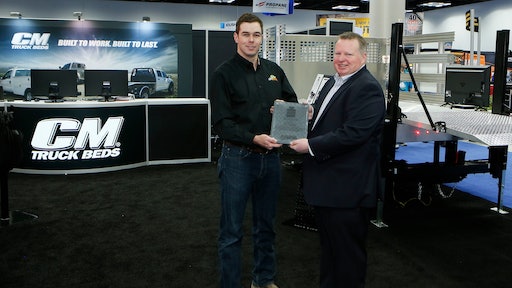 The Innovation Award honors the product displayed at the Show deemed “most innovative” by a panel of trade media editors and truck fleet managers. LiftGator XTR was selected from a field of more than 150 eligible products entered through The Work Truck Show 2017 New Product Spotlight or New Product Media Guide programs.

The patented LiftGator XTR is a portable, battery-operated liftgate system that can be attached to most pickup, flatbed, utility or service trucks equipped with 2-in. or 2 1/2-in. hitch receivers. Installation usually takes less than three minutes. LiftGator XTR gives truck owners the flexibility to install and use a 1,200-lb.-capacity liftgate when necessary, and to remove and store it when not needed. No truck modifications are required, and the vehicle can be driven with the liftgate attached.

The system has a 4' x 4' platform operated with a simple button. More than 20 lifts can be completed on a single charge, and the self-contained battery system can be recharged using a truck’s seven-pin trailer connector or any 110-volt wall outlet. When installed, the system does not interfere with the sight line of the truck’s brake lights. When not attached, its three-section foldable platform gives the unit a small footprint that takes up little storage space.

“LiftGator was designed for truck owners who have an occasional need to lift heavy equipment or materials into their trucks, but who don’t want to modify their vehicles with a permanent, weld-on liftgate that sometimes gets in the way,” said Justin Russo, president of LiftGator. “The many truck owners and fleet managers who visited us at the CM Truck Beds booth at The Work Truck Show said how much they liked the flexibility and versatility of this ergonomic, safe lifting solution that’s available on an as-needed basis.”

Chevrolet Medium-Duty Trucks Developed with Navistar will be Duramax Powered