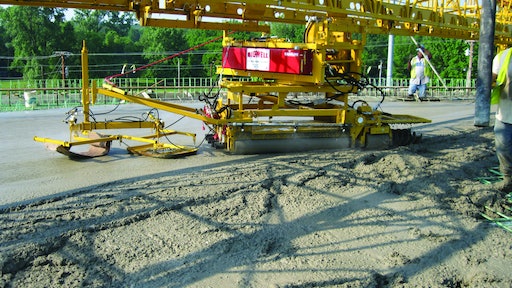 A 172-ft bridge over railroad tracks in a sleepy Southern town typically doesn't pose much of a challenge. Throw in a large skew angle, T-beams with a significant camber, a slight crown and a vertical curve, however, and the seemingly mundane now tests the skills of even the most seasoned bridge contractor.

The bridge's 168-ft-long T-beam steel girders were made with a 13-in camber. That alone isn't cause for great concern. However, the bridge's 59-degree skew angle shifted the camber point for each beam, which had to be accounted for when paving the deck.

A substantial vertical curve added to paving complexity. "The design included a positive 5.85 percent vertical curve on the uphill and a negative 4.85 percent on the downhill," explains Johnny Bowen, project superintendent for Manhattan Road & Bridge. The deck's surface also included a two percent crown. "This bridge project had all the challenges you could get," he adds.

Paving with the skew

The Edison Avenue Bridge is 65-ft, 2-in wide and includes sidewalks on each side. The steel girders were set to an 8-ft, 4-in center, if the bridge were square. However, measured at the skew angle, this widened the headers to between 12 to 15 ft. A 4,000 psi, Class 5 FAE concrete mix was poured over the corrugated metal deck pans.

Deck thickness ranged from 9.38 in to the bottom of the pan to 9.75 in over the haunch in the beam. "Our greatest challenge was getting the right deck thickness," says Bowen. Spec tolerances were tight, as paving crews could only miss target thickness by 0.25 in on the low side and 1.0 in on the high.

Manhattan purchased a new Terex Bid-Well 4800 paver specifically to pave the complex Edison Avenue Bridge deck. The company equipped the new paver with special options to aid in dealing with the grade, skew and finish of the bridge deck. "While we have an older Bid-Well, working with the new paver was nice and everything worked well for this project," comments Bowen.

Although bridge width was just over 65 ft, paving width for the 4800 was set to nearly double that at 121 ft to compensate for the skew. "By aligning the paver to the angle of the bridge, the paving carriage hits the same deflection point on the beam, keeping the grade consistent," explains Larry Eben, Southeast area manager for Terex Bid-Well.

To help align the paver and carriage, Manhattan purchased the optional skew bar kit, which is specifically designed to compensate for frame set up on the paver. Bowen estimates that the legs of the paver were approximately 18 ft apart from each other on the rails. "The kit allows the paving carriage to be offset, so it hits the same crown points from the front to the rear of the machine," adds Eben.

The machine's hydraulic power leg raise/lower option gave paving crews up to 60 in of vertical movement to help set the paver to grade. Due to the bridge's complex design, Bowen admits it took a while to set the machine to pave the crown, skew and vertical curve, but once everything was set, the crews ran into no problems.

Design specs demanded the center bridge span be poured first to address the T-beams' significant camber. This first pour of 80 ft required 170 cu yd of the Class 5 mix. The paving carriage was also equipped with the optional Terex Bid-Well fogging system. "It produces a fine mist to keep everything moist to aid in finishing, and it worked great," mentions Bowen.

Less than a week later, Manhattan finished paving the bridge deck, pouring both end sections the same day. Each 40-ft section required just shy of 85 yards. When the crew finished pouring one end, the operator simply raised the paving carriage and "walked" the machine over the previously poured center. "Our standard hydraulic carriage lift offers 5 in of lift for just such a need," says Eben.

Once the paver cleared the center section, the carriage automatically went back to its pre-established paving setting, and the crew quickly finished the final pour. A final inspection showed that Manhattan, with the aid of the 4800 paver, successfully completed the job and met the demanding thickness specifications.