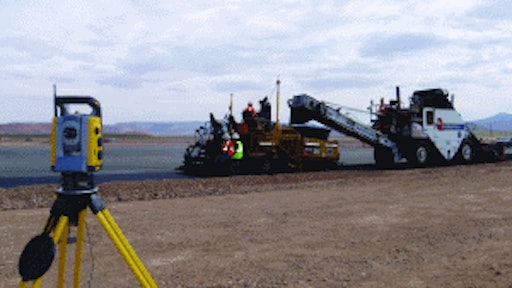 Smack dab in the middle of Dixie ... that's where St. George, UT is located. Actually, St. George is the population and commercial center of Utah's Dixie; a nickname given to the area when Mormon pioneers grew cotton in the warm climate.

Just a handful of years ago, the city was declared the second fastest-growing metropolitan area in the United States behind Greeley, CO. Located in the southwest corner of Utah, St. George continues to thrive.

With the rapid population growth of the area and tourism increasing, the need for a new airport became vital for the city's future. The old airport was surrounded by development with no room for expansion. The new airport is located approximately six miles southeast of the central business district at the 1,200-acre site of an abandoned airfield that has not seen air traffic since 1961.

The St. George replacement airport plans include a single runway capable of accommodating regional jets as well as other larger aircraft. SkyWest, which is based there, has a continual flow of planes landing or taking off. Additionally, there is quite a bit of private airplane traffic.

The runway will be oriented at approximately 010/190 degrees and will be 9,300' x 150' with future plans for the runway to be extended to 11,500 feet. The new St. George Municipal Airport also includes a state-of-the-art air traffic control tower, which can accommodate future needs.

The city broke ground on the new site in October 2008 and completion of the airport is expected in early 2011. Quality Excavating of St. George is the general contractor on the last phase of the project.

"We're the subcontractor on the job for paving," states Alan Buoy, superintendent with Western Rock Products. "We are responsible for achieving a smooth runway surface consistent with Federal Aviation Administration (FAA) requirements."

The St. George Municipal Airport runway paving project took Western Rock Products about two weeks to complete. Western Rock paved on an 8-inch base course of of P-209 crushed aggregate, as required by the FAA.

"We placed four inches of asphalt in two two-inch lifts with our paving crew using a track paver equipped with the Trimble PCS900 Paving Control System," Buoy says. "The Trimble system helped us accomplish everything with a smaller crew."

Western Rock used the resources of its local Trimble dealer, Wheeler Construction & Mining Technology, and Trimble technical support to ensure that they were getting the most out of the paving control system.

Specifically, the technicians from Wheeler and Trimble explained that the Trimble PCS900 System will manage three critical factors in the paving process: cross slope or straight edge, longitudinal waves (differential compaction), and elevation grade. According to the technical support, all these factors are difficult if not impossible to achieve all at once with a traditional 2D paving system, which can require multiple lifts to reduce imperfections (e.g., differential compaction).

The Trimble PCS900 Paving Control System is a 3D automatic screed control system that was able to directly reference off the digital design of the airport surface, allowing Western Rock to pave in a stakeless environment. "This stakeless capability saved us the time and effort of setting and adjusting string lines and increased our truck productivity by eliminating the need to drive around string lines," states Buoy. "We were able to load the design data into the Trimble CB430 Control Box and the machine automatically kept the screed on design."

Western Rock relied on the Trimble SPS930 Universal Total Station to support the machine control system. Buoy says, "We used one total station with the paver and one with the rover to help us verify and document our results. The Universal Total Station is very, very accurate. It won't lie. It tells you all the imperfections before they become a big problem."

The Trimble SPS930 Universal Total Station uses SCS900 Site Control Software, which helped Western Rock's runway paving crew in a number of ways. Setting up the technology to the jobsite's survey control points allowed the paving crew to check the elevation of each pavement lift for accuracy and record the points for verification.

"As long as you get your setups right with the data collector, there isn't a whole lot of guesswork with it," states Buoy. The system's accuracy was so good it helped uncover a couple of inconsistencies from the original survey that were corrected before they grew into major problems.

The technology eliminated the need for string lines. "We didn't need to run a piano wire down 9,300 feet of the runway to control our elevation," Buoy says. "That saved a lot of labor, hassles for the trucks that would need to maneuver around string lines, and it eliminated a lot of guesswork because with the program you're able to follow along with the rover. We knew where we were at all times."

Without the systems, Buoy estimates that he would have required four or five additional workers to set up and maintain string lines on the site and several extra days of labor.

With the final two-inch asphalt lift, Western Rock needed to achieve a tight tolerance on elevation. "Most of our elevations were well underneath the tolerance requirement," states Buoy. "We were an eighth- to a quarter-inch under on most of it."

Using the rover - the Trimble TSC2 controller, a handheld computer mounted on a grading pole — they could take shots of the elevations as the paving took place. Western Rock recorded and stored the data so that it would be available should it ever be needed.

"We only had two asphalt elevations off on the runway," Buoy says. "I think it's pretty amazing that out of 2,300 shots on the whole runway, we had two of them that were out of spec … just barely out. I don't know if we've ever done an airport before that's even close to achieving that kind of certification."

The profilograph, which measures longitudinal smoothness, had a PRI (Profile Ride Index) close to zero, which Buoy says is difficult to achieve. A profilograph catches any waves or deviation in the elevation, which would raise the PRI score.

"Achieving the smoothness we did on the finished runway surface meant we only had a couple hours of grinding, rather than the typical full day or two we would expect on a job like this," states Buoy. Grinding refers to the necessity to grind down all bumps and imperfections required to achieve a favorable PRI.

"On a typical airport, we usually have 40 or 50 grinds to do, instead of the four or five we had on the St. George Municipal Airport paving project," reports Buoy. "We saved quite a bit of time and effort to achieve the smoothness we did."

In thinking back to the project, Buoy reflected on the challenges they faced while controlling the straight edge or cross slope, longitudinal smoothness, and the elevation grade required on this runway paving job: "The tight time frame and rainy weather were certainly challenges. We completed the project on time, within spec, and avoided the $8,000 per day non-completion penalties. We had received more rain for the year when we were working on the project than annual rainfalls in prior years. Another challenge we had was that we were new to the Trimble PCS900 Paving Control System and 3D technology. It's a credit to the training we received from Wheeler Machinery and the Trimble engineering design that the system is easy to learn and run with minimal challenges."