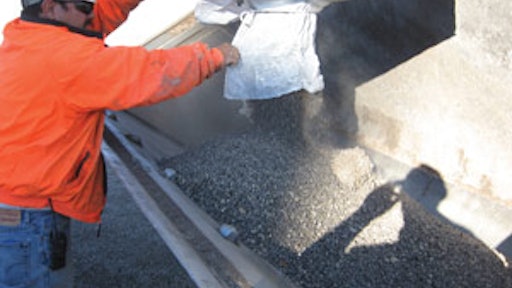 EZ-Lime offers a marked improvement over powdered hydrated lime used in asphalt cement pavements. It addresses several issues that have been obstacles in the past for the ease of use and health concerns of hydrated lime in asphalt.

Traditionally, hydrated lime has been used in treating HMA ingredients in order to improve the long-term interactions or bonds between the asphalt cement and aggregate. Such improvements have included anti-strip characteristics and reduced deformation or softening of the asphalt pavement over time.

Hydrated lime is sold in a powder form, and includes particulates that, if sound field practices are not followed, can become airborne and can be breathed into a person's lungs. It is possible for people working directly with the lime mixing process, as well as those in surrounding areas to be exposed to the airborne particulates that travel throughout a processing or construction site.

In part, this is because the hydrated lime particles can become airborne during transportation, loading, unloading, and while being used in the manufacturing process. As with any dust or particulate matter, inhalation of these particles can cause irritation or other health problems.

Furthermore, if it is not contained and handled properly, hydrated lime can cause problems with manufacturing and construction equipment. Again, this is at least partially a consequence of the small particulates that can be produced from hydrated lime, which can allow dust to float or circulate around construction sites and inhabited areas.

The small particulates can eventually deposit on the machinery or equipment and become entrained within joints and other moving parts. The particles can cause excessive wear and fatigue, and result in the equipment wearing out prematurely.

The Arizona DOT arterial specification hot mix produced at the Swan plant calls for hydrated lime added to wetted aggregate (3-percent water) and pug-mill mixed prior to drying the damp aggregate in the dryer drum. This means ordinarily during drying, a small fraction of the fine powdered lime is pulled into the bag house and a portion of the lime can be lost because very small particles may get through the filter bags. With EZ-lime added into the RAP collar or directly into the mixing chamber this (and other) issues are eliminated.

Four more identical mixes with the same design were produced with the only variation being addition methods of the lime. Two mixes using the method of adding EZ-Lime at a rate of 1 and 2 percent through the recycled asphalt (RAP) system that adds the pellets directly into the mixing chamber of the double drum asphalt plant. The other two mixes using the method of adding the EZ-Lime pellets at a rate of 1 and 1.5 percent directly into the asphalt oil and then into the mixing chamber. This was accomplished by using an EcoPath blending unit that was on site to add ground tire rubber to the oil for another paving project.

Samples of each of the five mixes were produced for testing and evaluation at various labs including University of Nevada-Reno, Western Technologies of Phoenix, PaveTex of Dripping Springs, TX, Petroleum Sciences of Spokane, and Texas A & M in College Station, TX. Completed tests of the Hamburg rut and TSR results showed that the addition into the RAP collar was the statistically equal to adding lime the conventional wet-method way.

"With the addition of EZ-lime to the mixing chamber many of the drawbacks, including delivery schedules of hydrated lime, are eliminated and the overall environmental benefits are extremely positive," says Bill Mackey of Granite Construction.

Market is expected to shrink 5.5% next year, driven primarily by the severe economic recession caused by the coronavirus pandemic.
American Road and Transportation Builders Association (ARTBA)
December 10, 2020
Follow Us