Many state DOTs are specifying a remixing procedure to prevent material and thermal segregation in order to achieve desired compaction densities and longer lasting roads. 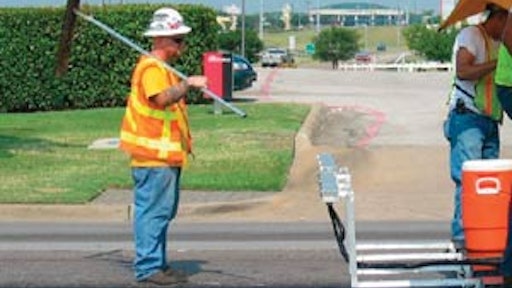 Building better, longer lasting roads in the United States is becoming an ever more urgent requirement. As we consider not only heavier loads and increases in the shear numbers of miles driven, but also the budgetary constraints on all Departments of Transportation, it is crucial to invest in a reliable road system that will serve us well into the future and will cost much less to maintain in the long run. Our Interstate and urban highways are the lifeblood of our economy, and even at current funding levels, our highways are getting worse. To address this problem, many states are now testing temperatures “behind the paver” in an effort to increase pavement quality.

To improve the quality of pavements in the United States, including bridges, concrete and asphalt applications, the Transportation Research Board invested $150 million dollars in its Strategic Highway Research Program (SHRP), which was active from 1988 to 1993. The final product of the SHRP asphalt research program is Superpave, which stands for Superior Performing Asphalt Pavements.

More than 94 percent of our roads are constructed using asphalt. Conservative estimates from the Transportation Research Board project that if Superpave procedures achieved only a 25 percent increase in highway service life, between $1.3 billion and $2.1 billion would be saved by reducing maintenance-related delays and vehicle wear and tear. What’s more, traffic accidents, injuries and fatalities carry a real dollar cost, and better overall road conditions also mean improved safety. However, even after adopting Superpave, premature failures continued to occur because while new material requirements dominated the research results, there had been no focus on field construction practices, or new construction technologies that are available. More research on construction practices and technologies were needed.

Engineers typically design highways to last 15 years or more, and perpetual asphalt pavements are designed to last 50 years. But some roads are failing earlier because of potholes, cracks, raveling and other problems. These premature failures unnecessarily waste millions of taxpayer dollars and threaten the strategically critical highway system.

One cause of premature failures in asphalt is caused by non-uniform aggregate gradation, asphalt content, and air voids in the asphalt mixture. Physical segregation (non-uniform, non-consistent) has long been recognized as a defect that agencies simply will not permit, and elimination of physical segregation is high on the agencies lists of priorities. Specifications and test procedures have been adopted to eliminate physical segregation. Now, states are beginning to address another major culprit: temperature segregation.

In 1996 a graduate student from the University of Washington, who had worked on paving crews in the past, conducted studies of segregation problems in paving operations for his master’s thesis, under the direction of his advisor, Dr. Joe Mahoney. The student, Steve Read, studied the phenomenon known as “truck fans” — spot segregation and end of load segregation, sometimes called cyclic segregation.

The purpose of the study was to determine the cause and a potential solution to the problem. Read’s thesis states, “When a pavement rehabilitation project is affected by this phenomenon, the expected life of the overlay can be reduced by roughly half of the 12 to 15 years that the Washington State Department of Transportation normally expects. There has been no way to predict which projects will be affected by cyclic segregation … it may not manifest itself during construction, but will show up in a project as long as two years after completion.”

During the study it became apparent that the problems were not physical segregation of the mix, but were related to temperature differentials in the HMA (hot mix asphalt). Long haul distances contributed to mixes cooling in the trucks, either on the surface of the load or where the mix has contact with the truck body.

Cool material along the sides of a delivery truck or the top of the load were delivered to the pavers and passed through them to the road surface being constructed. Pavers are not designed to remix material, and therefore cold spots showed up in the mat. Differential temperatures lead to differential compaction, and generally an increase in the air voids in these cooler spots, as well as roughness. These conditions are labeled “temperature differential damage.”

Dr. Mahoney, in conjunction with Washington DOT, subsequently used infrared imaging to pursue a thorough study. WSDOT concluded that “… placement of this cooler hot-mix can create pavement areas near or below cessation temperatures which tend to resist adequate compaction. Even after aggressive rolling, these isolated areas have lower densities (and more air voids) than the surrounding hotter material.”

Using a thermal camera to locate cool areas, WDOT checked densities in these spots and found that temperature differentials of 25 degrees Fahrenheit or greater will cause air voids to increase by as much as 2 percent.

Field data shows that for every increase of 1 percent in air voids over a base of 7 percent in the mix, the life of the pavement will be reduced by 10 percent.

Ultimately, correct and consistent mat densities determine the performance of any asphalt mix. In-spec mat densities can only be reliably achieved if the material behind the pavers is consistent and uniform in temperature.

Thirty-nine states currently recognize the use of material transfer devices as the preferred method of remixing hot asphalt mixes that have demonstrated either physical or thermal segregation.

By remixing the delivered material prior to putting it in the paver, physical and thermal segregation can be eliminated. Now the paver can place a uniform, consistent mix, which rollers can compact to the specified density.

With the implementation of Superpave, State DOT’s have moved to using end result specifications requiring the monitoring of temperatures behind the pavers, and uniformity of those temperatures.

Several states, such as Washington , Texas , Arkansas , Massachusetts , Connecticut , and Maryland have recognized the problem and have enacted specifications, and/or test procedures to eliminate temperature segregation in their mixes. States’ testing protocols do vary. Texas tests for temperature differentials behind the pavers at 25 and 50 degrees as action trigger points, Massachusetts permits no greater than a 20 degree Fahrenheit temperature differential, and Arkansas has tightened the specification to permit only a 10 degree Fahrenheit differential.

However all states with guidelines have one common goal: The final product is a uniform, consistent material that can be uniformly compacted to the desired density.

The result of these efforts will be a durable, long-lasting pavement that minimizes future maintenance cost of the highway, reduces vehicle maintenance costs, and increases drivers’ and passengers’ safety, while ensuring highways properly constructed to meet the heavy loads and high traffic volumes that designers must accommodate.