To Prime or Not to Prime ... That is the Question

Here's a look at what priming is and if you should consider it on your next project. 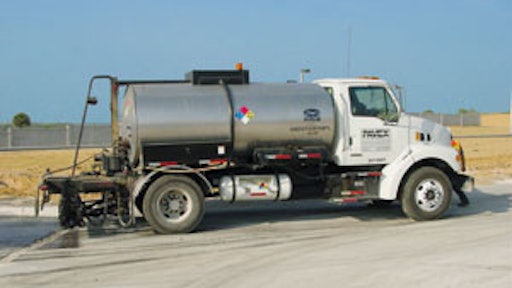 There is a substantial amount of misinformation concerning the function and proper use of prime. Prime is not glue ' causing the base to adhere to the pavement is not its purpose. Prime's purpose is to protect the base from rain and light traffic when the paving will be delayed.

A prime coat is an application of an asphalt cutback or emulsified asphalt to a prepared base. The base can be either a subgrade or a base rock. Prime functions as a protector from rain for both types of bases. A prime coat should not be confused with a tack coat. Tack is an adhesive for gluing two asphalt layers together.

A subgrade or rock base is not a single component. It's made up of millions of varying sized particles. In the process of finishing a rock base, the surface is graded and rolled repeatedly to obtain required compaction.

This process will grind the surface into a smooth texture. This results in millions of tiny particles being present at the surface. But, unlike concrete, which also floats small particles to the surface during finishing, there is no significant adhesion between the particles of rock. You can literally pinch up the loose material by hand.

Optimum moisture content of the base is important for density. Restricting a completed base from absorbing additional moisture retains the base's structural value. Prime is useful for moisture control of a completed base. It slows down the evaporation of the water applied for compaction and retards penetration of rainwater. Prime will also control dust if the base will be used for temporary traffic.

What the experts say

None of the nationally recognized asphalt pavement design systems give any structural value to a prime coat. I've researched the available literature from asphalt specifying organizations and the results are as follows:

From section 14, Granular Base Course, page 122: "The prime coat acts as a temporary waterproofing layer that protects the base course and prevents it from absorbing excess moisture during rain before paving. It also allows the base course to be used for light traffic, binds together any dust on the surface of the granular base layer, promotes the bond between the base-course material and the new HMA overlay, and prevents slippage of thin overlying pavement layers.

There is no reference either in the table of contents or in the index dealing with the subject of prime cost or the need thereof.

From prime coat and tack coat, page 16: "The need for prime coat is a topic of debate among paving specialists. On subgrades and aggregate base courses, prime coat is intended to maintain the prepared surface prior to paving, although for subgrades this may be unnecessary or counterproductive.

"Prime coat is effective on unbound aggregate bases and is also useful to protect the work from rain when paving will be delayed. It should be used on cement-stabilized soils as a barrier to moisture intrusion.

"There are several disadvantages in using prime coat, including cost and delay. Prime coat should not be applied to a subgrade when it is wet. Highly cemented soils which harden as they dry out may soften if prime coat is applied.

This is the only reference to prime coat in the book. The technical information agrees on the function of the prime coat as a protector for base, but gives no firm recommendation for its use.

I have personal knowledge of the political side of the "use of prime debate." I have served on the Specification Committee for the Asphalt Contractors Association of Florida for 19 years and was chairman for nine of those years. During that period, this committee reviewed all of the asphalt specifications for Florida.

Approximately 14 years ago, the FDOT came to the Asphalt Contractors Association to request that prime be eliminated as a requirement for the rock bases and that its use becomes optional.

At an approximate cost of $.25 per square yard, the FDOT felt they could save substantial amounts of money that they were paying purely to provide convenience to the contractor.

The association was against making prime optional, even though it acknowledged that prime has no structural value and is strictly a rain barrier for the rock base. However, it argued that in Florida the paving contractor and the grading contractor are often two different entities.

If priming were made optional, the grading contractors would want the rock bases paved each time they had a small area ready, resulting in paving work being performed in much smaller sections, similar to paving a checkerboard.

Since asphalt pavement is laid smoother and more productively in large, long, straight sections, we argued that allowing the grading contractors to pave the jobs in smaller pieces would result in ridability problems.

The association felt the FDOT should continue to require and pay for the prime for that purpose. If not for the actions of the Asphalt Contractors Association, prime would not be required for rock base by Florida specifications today.

Another common issue dealing with construction of prime coats is the application of sand. Correct construction involves spraying the prime, allowing it to cure for 24 hours, and applying sand only to those areas that have not dried after that period of time.

If sand is applied to a prime coat immediately after it is sprayed, the prime, taking the path of least resistance, will coat the loose sand, rather than serving as a moisture retarder for the underling surface. Also, since the prime coats the loose sand, it is broomed off prior to paving.

In summary, if the rock is prepared and paving is imminent, application of prime coat becomes optional. If the rock base is prepared and some time will elapse or inclement weather is anticipated prior to the area being paved, prime is useful to protect the base for that period of time.

Sanding should only be done in those areas that stay wet after the cure period. Sanding of prime in general is not necessary, except in those instances when traffic is going to be using the base for a period of time.

Jon Chellgren is a professional engineer with more than 30 years of experience managing paving and grading companies. He currently works as a consultant in Boca Raton, FL. You can contact him at JDChellgren@aol.com