State-of-the-Art Paver Pays Off in Smoothness 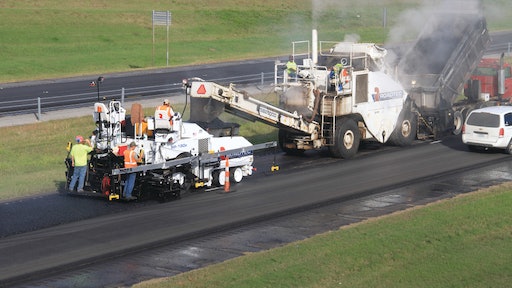 If trade shows are like speed dating where you have five minutes to earn a thumbs up or down when looking at a piece of construction equipment, then construction machine demos are a test of compatibility.

Machine demonstrations or demos provide the opportunity for a contractor to learn about a machine and test it. The contractor gets the chance to see if the equipment matches their needs, fits comfortably into the fleet and passes the critical evaluation of its crew, before spending a dime.

For Chester Bross Construction Company, headquartered in Hannibal, MO, a bit of a love-at-first-sight product demo has turned into a permanent, solid relationship. Chester Bross has more than 40 years of general paving and construction experience ranging from, as they phrase it, “driveways to highways.” The company’s start-to-finish services include excavation, asphalt paving, concrete paving, curb and gutters, cold-milling, diamond grinding, profiling, culverts, bridges, structures, surveying and site rehabilitation.

“We brought our new, latest technology Roadtec RP-190e rubber-tired asphalt paver to a Chester Bross road project and let them run the machine on a current project,” stated Austin Miller, regional sales manager, Roadtec, Inc. “The ride numbers they were achieving were substantially better than what there were getting with an older piece of existing equipment. The numbers continued to hit maximum bonus on the project for the next two days of the demo.“

Mike Bross, owner and vice president of operations for Chester Bross Construction Company, said that together with his father, Chester Bross, they made the decision to purchase strictly on the performance they were experiencing with the Roadtec RP-190e paver during the demo trial period.

“Like everyone in the industry, we were having a challenging business year,” stated Mike Bross. “We were not intending to make any large capital investments, but if we can increase productivity and get results achieving or approximating 100 percent bonus then the purchase of a new machine becomes a no brainer."

According to the manufacturer, the 10-foot Roadtec RP-190e highway class asphalt pavers have received a major redesign, including the addition of Tier 4i, Cummins QSB 6.7 engines rated at 230 hp (172 kW) at 1,800 rpm, and heavy-duty offset type conveyor chains, chromium carbide floor plates that can drop in without bolts, and updated dual operator stations that feature hydraulic-pivot consoles and selectable seat positions. Additionally, the paver’s augers can be operated independently of the conveyors, which is designed to provide the operator with complete control over the material.

One of Chester Bross’ first jobs running the new paver was a 14-mile, four-lane stretch of I-55 in Scott County, Missouri near the city of Sikeston. Interstate highway I-55 runs through the middle of the United States stretching north from LaPlace, La. (about 30 miles west of New Orleans) to Chicago.

“This was a superpave job, meaning we placed two lifts of asphalt over the old, worn-out concrete highway surface,” stated Phillip Dowell, site superintendent for Chester Bross. “The first course was a deeper two-inch lift to smooth out the uneven surface. The finish lift was 1¾-inches of stone-mastic asphalt (SMA) to provide longer wear life on this stretch of heavy traffic highway.”

The $7 million Missouri DOT (MoDOT) project was delayed because of the rainy weather in the spring. Chester Bross commenced work in late September and needed to be completed by the second week in November, before winter weather might start.

“This less than two month timetable was a bit of a production crunch for our eight-member crew,” Dowell said. “We worked 16 to 18-hour days and we were happy to have the new RP-190e paver. The machine’s anti-segregation design, electric flow gates, and 18-inch hydraulic tunnel extensions provided the control of the material flow from the hopper to the screed that we needed.”

In addition to the consistent lay down of the asphalt pad, Dowell liked that the paver could be set up quickly in the morning and with its newer technology, the machine automatics are designed to ensure exacting results without regular adjustments. The Roadtec RP-190e paver features a 10-foot main screed with a five-foot extension wing on the right and a four-foot extension wing on the left, which accommodated the 12-foot wide highway.

“Compared to our old paver, we are able to run the RP-190e much faster without sacrificing  quality,” Dowell stated. “I’m not sure we would have met the project deadline without the efficiencies of the new paver. We literally saved at least two days of production.”

The MoDOT I-55 project had a pavement surface smoothness requirement with monetary bonuses for achieving better than the minimum requirement of an International Roughness Index (IRI) of 80 or better. Chester Bross Construction Company achieved IRI scores of less than 30 on most of the completed roadwork, which earned them a five percent bonus. The remaining sections were between 30 and 70 on the IRI scale, netting them a three percent bonus.

“Clearly, we wouldn’t have achieved those high Profilograph measures without the new Roadtec RP-190e paver,” said Dowell. “The screed is easy to use, the controls are easy to understand, and the machine requires little adjusting to get the results we got.”

MoDOT inspectors were pleased with the finished smoothness of the road and the fact that the work was completed ahead of schedule. The smoothness of the completed I-55 section falls within MoDOT’s initiative to “smooth out much of the state’s pavement,” which is projected to improve annual fuel economy in the state by 2.4 percent.

As Dowell succinctly summarized: “We made the road really smooth; got it done really fast; and made my company some money… couldn’t ask for more.”