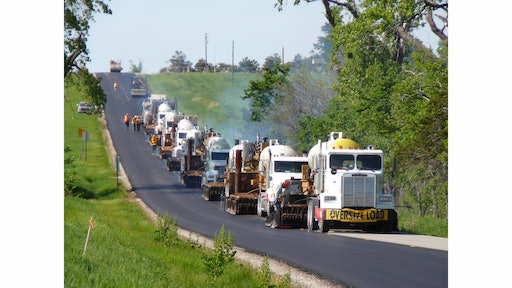 It all began in August 2009, when Jay Norris with the Tennessee DOT attended an ARRA (Asphalt Recycling & Reclaiming Association) conference in Minneapolis, MN, with an interest in finding new recycle methods. There he found Dustrol and its unique Hot In-Place Recycle (HIR) method known as the MARS method.

Dustrol, which is based in Towanda, KS, near Wichita, traveled to TDOT in September 2009 to give a presentation on its MARS HIR process. “In the next 3 ½ years, TDOT worked on specs and looked at other recycle options,” says Ron Wilson, vice president of operations with Dustrol. “Eventually they put three projects together, letting them in April 2013. It was a fairly generic spec, allowing several methods of HIR to be used.”

Like many agencies, TDOT was looking for a way to stretch its maintenance dollars and maintain more miles for less money. It also felt that asphalt prices were getting too high, says Wilson.

“They looked at different surface treatments as well as recycle options,” he says. “The projects that they put together were alternate bids, HIR with micro surfacing versus asphalt mill-and-fill.

“They were hoping to go green.”

Dustrol was given four projects by TDOT to complete using HIR – the first time the method would be used in the state of Tennessee.

HIR, an efficient process used to repair and rehabilitate deteriorated bituminous streets and highways on-site with specialized equipment, allows available dollars to be spread over more square yards of pavement maintenance areas, which is attractive to road agencies.

Dustrol's MARS (Mobile Asphalt Recycle System) is designed for rejuvenating asphalt up to 2 inches or more. The system provides a low-cost maintenance strategy for removing cracks, ruts and low areas by using existing asphalt pavement for in-place rehabilitation. Flexibility and quality are restored to the asphalt material and the pavement is prepared for other surface treatments.

The MARS process is performed using multiple-lift milling heads. The multiple-lift operation allows for the rejuvenation to go to 2 inches or more in depth, without degrading the existing asphalt and aggregates.

"The process allows surfacing to be placed the same day or weeks later," says Brian Hansen, vice president, with Dustrol. "A recycled road or street can be completed and opened to traffic with only a few hours delay. Although the train is highly visible to the public, the process is fast and presents only a minor inconvenience to motorists."

The pavement conditions on all of the Tennessee projects were very dry, cracked and stripped of asphalt. The existing 1.25-inch overlay had areas of slippage and debonding. There were also areas of base failure and a lot of areas of maintenance patching, says. Wilson. “The existing asphalt was out of shape and the ride numbers were very high, very poor,” he says.

All four projects included recycling at a depth of 1 ¼ inches and finishing the surface with a 22 lb./sq. yd. micro surface. “Because the projects exhibited some level of surface distress, they were excluded from being candidates for a simple HMA overlay or micro surface,” says Woods with TDOT.

Details of the projects included:

“The existing pavement consisted of quality aggregates with low asphalt content that was cracked and out of shape, but was for the most part structurally good,” says Wilson. “The asphalt only needed to be rejuvenated and have polymers added to make a better mix and then laid back down and shaped up.”

The additive used to rejuvenate was an ARA 3P emulsion from Ergon. TDOT preformed the mix design using the following criteria:

The surface course for the projects was performed by the prime contractor, Hudson Construction from Chattanooga, TN, which added a micro surface over Dustrol’s work after a cure time of seven days.

Dustrol designs and builds all MARS equipment itself. "Most companies in the HIR market build their own equipment," says Hansen. "There is some equipment available from suppliers, but we wanted to target open highway type work. Our trains can be over 1,000 feet long … we're not going after the small city street market or cul de sac market with our trains."

Because each job is different, Dustrol is able to customize its MARS train to fit the specific application. "Each state can require a different number of times the material has to be milled," explains Hansen. "For example, some might require that you can't take more than a 1-inch layer at a time. Other states might say you can't take more than 1/2 inch. If you're going 2 inches deep, you would mill and level the road four times. This would require us to add more equipment to the train.

"Some states require us to add aggregate – rock or sand – or 10% virgin hot mix, and mix and blend it with the material we're milling," he continues. "This adds yet another piece of equipment to the train.

"The basic components are always the same," says Hansen. "We just add or subtract equipment."

On the Tennessee projects completed in 2013, Dustrol used five heating units, two heaters and three heater/mills. “On the 2014 work, the train consisted of six units, three of each, which allowed us to get a little better result,” says Wilson.

After heating and processing the material, it’s picked up with a windrow elevator and laid with a conventional paver, a Terex CR662RM Road mix unit, which has mixing augers in lieu of slate conveyors to assist with mixing.

Rolling was completed with two Volvo DD138 rollers. Each roadway was also profilographed before and after to ensure at least a 30% ride improvement.

No projects are without their challenges. In 2013, the challenges for Dustrol in Tennessee were narrow, hilly, curvy roads, with a very dry existing asphalt mix.

“The first project in Hawkins Co. was like working through the middle of a small town,” says Wilson.
“There was a house and driveway every 100 feet or so. The weather was also very wet that June.”

To combat these issues, Wilson said the crew went slow, maneuvering around the curves, traffic and mail boxes, and worked with the homeowners along the way to make a very successful project.

“We adjusted to the weather, worked around the rains and even had to re-heat a couple of areas when we got caught in the rain,” he says. “That’s one of the advantages of HIR – it can be reworked again.”

Also on the first project, there were some issues with the mix design, which was put together by TDOT. “It was too dry and needed more emulsion,” explains Wilson. “The temperature spec was too high, and the density requirement was also too restrictive for recycle work.

“Fortunately, TDOT was very receptive to our knowledge and experience, and we were able to increase the oil quantity, adding to compaction efforts and making a better mix,” he continues. “We also convinced them that their original temperature spec was too high and proved that density could be achieved at lower temperatures. The inconsistency of the existing asphalt – because of patches, crack sealant, multiple existing mixes, etc. – makes the density vary at times, so we adjusted to a rolling pattern to achieve the best possible density.”

The third project in Lauderdale Co. had Tennessee’s largest state penitentiary at the west end of it. “We adjusted our traffic control to meet the demands of the hundreds of workers at the prison, so they were not overly inconvenienced,” says Wilson.

Since this was the first time TDOT was using HIR, from its perspective, the challenge was making sure each party was on the same page.

“Any time a new treatment or process makes it to TDOT contract, there is the challenge of educating all parties involved on how the process works and what is expected of contractors and state inspectors,” says Woods. “In the case of these four HIR projects, there were many times when state inspectors weren’t certain what to be looking for, what was acceptable and what adjustments or recommendations should be made, if necessary.

“We know now, as usual with new construction technology, confusion regarding specs and processes can be cleared up before construction begins during pre-construction meetings.”

Woods says all four projects are performing satisfactorily and that it’s very likely that Tennessee will use the MARS HIR method in the future.

From the contractor’s point of view, Wilson said that Tennessee has great asphalt to recycle and he enjoyed working with TDOT. “We were a long way from home, but it was a great experience for all our guys,” he says. “Plus we got to visit the Bristol Motor Speedway and the Jack Daniels Distillery!”