How Will Autonomous Vehicles Impact How We Build Roads? 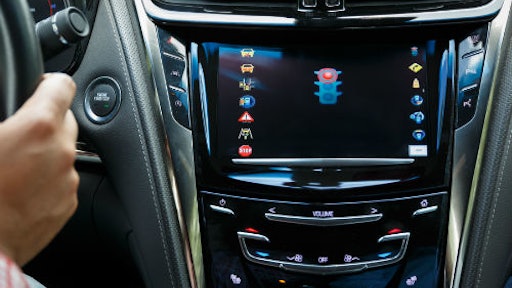 Automated vehicle technology is advancing faster than our infrastructure can adapt. Without V2I tech, the autonomous vehicle dream might not come true.

When picturing the coming age of autonomous vehicles (AVs), it’s easy for some people to get stuck on picturing the cars themselves. Their sophisticated sensors, flashy dashboards and roomy cabins have created a well-deserved buzz and interest for humans who’d like to read the paper on their way to work.

In order to stay on the road, avoid collisions and obey traffic laws, AVs rely on a series of sensors that help the cars understand the environment in which they're traveling in real time. By using a combination of ultrasonic, radar, imaging and LiDAR sensors, a digital road map is formed ahead of an AV to essentially help it "see" where it's going.

The problem however, is that this vehicle technology is advancing faster than our infrastructure can adapt. While AVs themselves are glamorous, vehicle-to-infrastructure (V2I) technologies are essential to the whole picture. Without V2I tech, the autonomous vehicle dream might not come true.

Roadview, based in Madison, WI, specializes in geospatial mapping of transportation infrastructure. The field work that Steve Caya, head of production, and others at the company have done over the years has underscored the need for V2I tech, he says.

“Just as human drivers require visual and auditory cues to ensure a safe journey, driverless cars will need vast amounts of vehicle-to-infrastructure communications data to understand their world,” he says.

So how will that impact the way our roads look? Caya says that roadways in the automated world will look very different due to vehicles being safer and more efficient.

“AVs have the potential to travel more precisely than human operated vehicles so roadways in an automated world will be smaller with more efficient right of ways,” he says. “AVs’ unique navigation capabilities are expected to enable narrower traffic lanes, reduce the number of lanes needed to accommodate traffic demand, remove the need for medians and reduce signage.”

Lane Size: Lanes today are designed to account for driver wander and human error. If lanes were designed to the width of an AV, the lane width could be reduced by 20 percent.

Less Signage: Signs and signals are important features of today’s transportation system as they provide drivers with the information they need to keep the transportation system running smoothly. But with the emergence of Vehicle to Vehicle (V2V) and V2I technology, future roadways will not need a large number of traffic signs and signals as information can be transmitted to AVs wirelessly and in real-time.

Traffic Reduction: AVs are able to drive more efficiently than humans can so they can ride closer together, reducing traffic and congestion. And since 93 percent of crashes are caused by human error and 25 percent of congestion is caused by traffic incidents, congestion should be reduced even further with AVs.

Drop-Off Lanes: AVs are also expected to reduce the number of vehicles needed by promoting ride sharing which will create a need for drop-off lane construction. These will be drop areas that are as close as possible to the entrances of destinations.

Parking Lot Revolution: Since there will be less cars on the roads, there will be massive changes made to the location, form and amount of parking needed as AVs can park themselves and remain in the transportation network while waiting for a passenger.

The Senate is preparing consideration of a bill to improve roadway safety and autonomous vehicles (S. 1885). If enacted into law, the bills may result in new road standards to ensure optimization of pavement materials and markings. To help build confidence in self-driving vehicle technologies, the Senate legislation would require manufacturers to provide a safety evaluation report to the U.S. Department of Transportation that outlines any roadway or infrastructure assets, such as pavement markings, required for the operation of the vehicle or automated driving system, as well as an explanation of how the vehicle/system would respond to unexpected changes in external conditions, such as work zones.

The bill would require the National Highway Traffic Safety Administration (NHTSA) to complete several rulemakings and establish two advisory councils on HAV technology and consumer education. The bill also would require NHTSA and the Volpe National Transportation Systems Center (Volpe Center) within the Department of Transportation (DOT) to complete several studies on the issues surrounding the use of HAVs.

The CBO estimates that implementing the legislation would cost $22 million over the 2018-2022 period, assuming appropriation of the necessary amounts.

While Congress is figuring out the logistics, planners and contractors should start positioning transportation infrastructure for what’s coming. Caya says a mix of dedicated AV lanes and normal vehicle traffic is most likely what’s coming first.

Vehicle to Infrastructure or V2I communication is a critical component of a connected vehicle environment—a system of hardware, software, firmware and wireless communication enables the dynamic transfer of data between vehicles as well as between the vehicles and elements of the roadway infrastructure.

Most AVs will communicate with the infrastructure around them through sensors in other vehicles and through signage. The vehicles will detect these sensors and tell the vehicles to stop, slow down and move over as necessary.

Most automakers and road builders agree that this on-highway style of operation for AVs is relatively simple when compared to busy urban environments. However, certain scenarios like passing through tollgates and work zones are much more difficult for autonomous vehicles to safely navigate, and it quickly becomes evident that these vehicles cannot rely solely on cameras and sensors.

This year, the Michigan Department of Transportation (MDOT) and the Macomb County Department of Roads, collaborated with General Motors (GM) for more V2I testing on two busy intersections.

The Mound Road traffic signals, located at the intersections of 12 Mile and 13 Mile roads, were able to send real-time data to the vehicles, which could alert the driver of a potential red light violation.

In the test, development vehicles were able to receive data from the traffic controllers on signal phasing and timing. This collaborative validation of direct data communication between the traffic signals and the vehicles marked a significant step forward into the world of next-generation automotive research and development.

This type of connected technology holds promise of drastically reducing crashes that result in death or serious injury, especially at busy intersections.

At the same time, 3M is working with MDOT to make safer work zones by embedding 2D barcodes inside orange barrels. The barcodes are tools that infrared devices in the vehicles can read and communicate to both the vehicle and the driver. Manufacturers are testing the messaging the vehicles receive from the barrels and how the vehicles are interpreting it.

3M is also studying what the best paint stripes are for roadways that will carry AVs and is developing a more reflecting paint for LiDAR sensors.