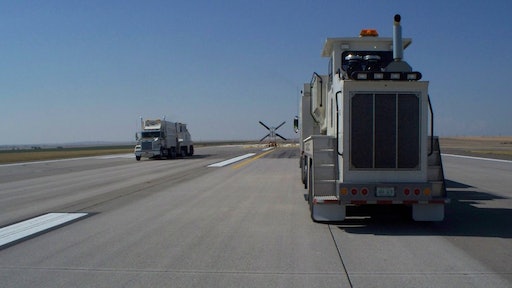 When planes land at airports, small amounts of rubber wear off the tires leaving a rubber residue behind on the runway. Rubber build up on the pavement causes a loss of friction that, if allowed to go unchecked, will cause a reduction in aircraft braking performance. Following Federal Aviation Administration (FAA) guidance, airport operations must monitor the friction levels on runways, and when the friction level drops below FAA minimum levels, the rubber buildup must be removed to restore friction. Rubber buildup is typically removed by shotblasting, high pressure waterblasting, or chemical cleaning.

Shotblasting is a mechanical process where a volume of steel pellets—or shot—is propelled with high velocity onto a concrete or asphalt surface. The shot impacting on the pavement abrades the surface, removing contaminants such as rubber deposits, and creates additional texture, that, in turn, improves friction. The main benefit of shotblasting is that it is environmentally friendly. The steel media used is contained and recycled within the system. The removed material is captured within a containment system where it can be disposed of at a proper site. Shotblasting can increase both the macro and microtexture of the pavement surface, where other methods typically affect only the macrotexture. Increased macrotexture allows for better evacuation of water beneath aircraft tires, and better microtexture improves contact between the tire and pavement surface, increasing the friction level.

Waterblasting works similar to shotblasting but uses high pressure water instead of steel media. It is generally not as aggressive to the pavement surface as the mechanical texturing process and mainly removes rubber with little additional improvement of macrotexture. With the chemical cleaning method, chemicals are applied to the pavement and then washed off with lower pressure water. The chemicals breakdown the rubber without changing the pavement surface.

San Antonio International Airport requires contractors to hire a third party to perform friction measurements on their pavements before and after retexturing. Skidabrader hired pavement engineering firm The Transtec Group to carry out the required testing.

“There was no question in the trust and professionalism you get working with Transtec,” Josh Jones, transportation market manager with Blastrac/Skidabrader says. “Transtec is at the forefront of the industry when it comes to data collection. Everyone within the firm has extensive knowledge of pavement design and the different remedies for pavement distress.”

Before and after the shotblast surface treatment, Transtec performed testing to evaluate the pavement friction on the runway. The measurements were conducted with the GripTester Continuous Friction Measuring Equipment (CFME) device.

The GripTester measures pavement friction in order to identify areas with inadequate friction due to a loss in texture from wear and rubber buildup.

The GripTester is a fixed-slip continuous friction measuring device that provides a friction reading (GripNumber) approximately every three feet over the surface tested. It is a towed device and measures friction at about a 14% slip rate. This means the test tire is rotating 14% slower than a free-rolling tire, generating a drag force that is used to quantify friction.

Because wet pavement has lower friction than dry pavement and is considered a worst case, the GripTester contains a self-wetting system which applies a 1 mm (0.04 inch) depth water film just in front of the test tire. For runways, the typical test procedure is to measure friction at speeds of 40 and 60 mph and at 10 and 20 feet on each side of the runway centerline. Results are reported in 500-foot intervals.

The GripTester is one of several approved CFMEs found in FAA Advisory Circular 1150/5320-12C.

Friction testing was conducted on the runway prior to shotblasting and again the day after the completion of shotblasting. GripTester runs were conducted in both directions, 10 feet to the right of the runway centerline, and at a speed of 40 mph. The data collection began and ended at the first touchdown zone markings, ensuring data was captured over the areas with the most severe rubber buildup. 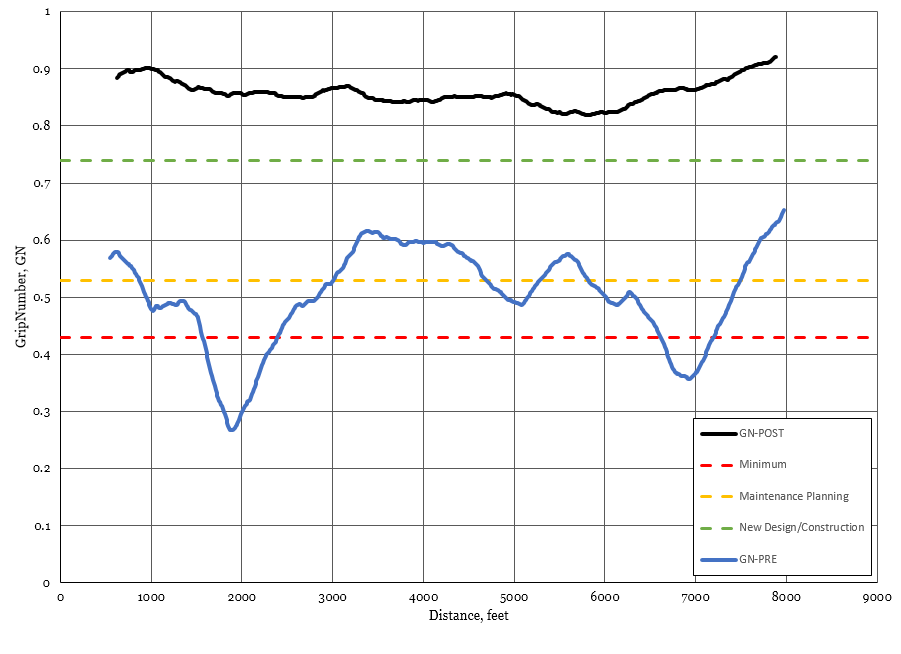 Transtec’s friction testing confirmed that Skidabrader’s shotblasting treatment successfully restored friction not only above maintenance/planning levels, but also above the required friction levels for new construction.