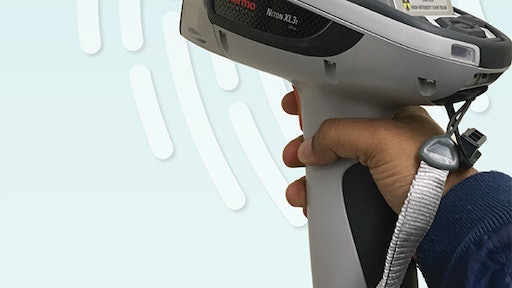 Ensuring that asphalt binders don’t contain too many contaminates can be key to ensuring a longer-lasting roadway. The Texas Department of Transportation (TxDOT) is implementing use of an innovative technology in a new test method and updated specifications developed during a two-year study conducted by the Materials and Pavements Division of the Texas A&M Transportation Institute (TTI).

Transportation agencies, including TxDOT, have recently noticed premature failures of newly constructed pavements. Along with distresses — such as temperature cracking and raveling, aggregate loss, and instances of total surface course loss within five years — pavement engineers have had concerns about embrittlement and a lack of adhesion and tackiness of the asphalt and seal-coat binders.

TTI's answer to finding the root cause of the failure was an X-Ray gun that measures the chemical composition of the asphalt.

The new lab test methods require using either a handheld or a benchtop x-ray fluorescence (XRF) instrument in a simple process.

XRF spectrometry is an analytical method to determine the chemical composition of materials, whatever their form (solid, liquid, etc.). XRF can also sometimes be used to determine the thickness and composition of layers and coatings. On the device is a camera  and a screen which displays what the camera is seeing so researchers can line up the X-Ray device with the asphalt. The device is touched to the asphalt surface to obtain a reading.

After 30 seconds the X-Ray scan is complete.

“The method is fast, accurate and non-destructive, and usually requires only a minimum of sample preparation,” research engineer Fujie Zhou, TTI’s lead on the project says. “The precision and reproducibility of XRF analysis is very high. It’s almost like taking a fingerprint of the asphalt binder. The analysis time after the measurement is only a few seconds.”

Researchers at TTI have been testing this technology with the XRF manufacturer since 2016 and will continue to monitor success out in the field. However, you won't see these guns massed produced just yet.

These devices, which are developed by Thermo-Fisher Scientific, are said to cost more than $50,000.

Read more on the project from TTI here.