The President indicates he wants significant progress made in Congress on the package by Memorial Day and said that inaction on his American Jobs Plan is "not an option." 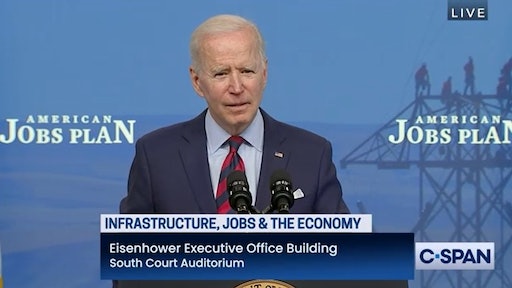 President Joe Biden delivered his second pitch in two weeks for his $2.2 trillion infrastructure proposal as his team begins to meet with Congressional leaders and reach out to governors, mayors and the broader public through phone calls, briefings and local TV appearances to make their case.

The President urged Congress to get to work on crafting a program, regardless of their opinions on the plan.

"Democrats, Republicans will have ideas about what they like and do not like about our plan," he said. "That's good. That's the American way. That is the way democracy works. Debate is welcome, compromise is inevitable. We will be meeting with everyone and we will be listening, open to good ideas and good negotiations. We will not be open to doing nothing. Inaction is not an option."

The President also argued during the speech that infrastructure needs go far beyond just roads and bridges and that his American Jobs Plan will have far-reaching positive impacts on the country. Biden also reiterated that his proposed investments, spanning broadband to an upgrade of the electrical grid, are key to successfully competing with China and stressed that addressing climate change was indeed a part of building resilient infrastructure.

"We don't just fix for today. We build for tomorrow. Our country has always evolved to meet the aspirations of the American people and their needs," he said. "It's evolving again today and we need to start seeing infrastructure through its effects on the lives of the working people in America. Infrastructure in the 21st century still depends on roads and bridges, ports and airports, mass transit, but also on having reliable high-speed internet in every home... It depends on the electrical grid...It depends on inventing in the communities we live in..."

The speech comes as Republicans and Democrats have been at odds about the proposal since it was announced. Republican lawmakers have blasted Biden’s plan, calling it too large after his $1.9 trillion pandemic-relief bill and saying it would damage the economy with the proposed corporate-tax hikes to help fund it.

Democrats on the other hand have said the bill wasn't large enough and have squabbled amongst themselves about the plan with no consensus on how the infrastructure package will take shape.

Regardless of party affiliation, Biden is adamant this plan moves forward, and fast.

White House aides have said they want Congress to make significant progress on an infrastructure bill by Memorial Day. House Transportation and Infrastructure Committee Chair Peter DeFazio (D-OR) said Tuesday his panel aims to complete its part “probably” in the third week of May.

Republicans have pushed back launching a broad assault on the package, arguing it was too expensive and was stuffed with overly partisan programs that had nothing to do with fixing roads and bridges.

"We have to show ourselves that democracy works. That we can come together on the big things," he said. "Building the infrastructure of tomorrow requires investment today. Divisions should not stop us from doing the right thing for the future. The overwhelming majority of the American people support infrastructure investments that meet the moment. I urge Congress, listen to your constituents. Together, we can lay a foundation around an economy that works for everyone."

No Consensus From Either Side on Pay-for

Despite President Biden's urgency to get this program moving, Congress is still at odds.

White House press secretary Jen Psaki said during Monday’s press briefing that Biden called for increasing the corporate tax rate to 28 percent because he “felt it was responsible to propose a way to pay for his proposal.” But she also said the administration expects there will be discussions with lawmakers about how to finance the package.

Biden said he was open to lowering the 28% increase and would listen to all options on how to pay for it. His one exception was he would not impose tax increases on anyone making less that $400,000 a year.

Biden said he will invite lawmakers from both sides of the aisle to pitch ways to improve on the plan he’s laid out -- but will challenge critics to explain why it’s acceptable that 91 of the biggest corporations paid no federal taxes in 2019.

"A new independent study last week saw 25% of our largest corporations use loopholes to pay zero federal income tax in 2020. it's not fair to the rest of the American taxpayers," Biden said, adding that they will work to close corporate loopholes that allow this to happen.

However, Democrats will need to craft legislation that can get near-universal support in the party, since Republicans have signaled that they will oppose any measures that resemble the proposal Biden unveiled last week.

Stay tuned to ForConstructionPros.com as negations continue and plans are unveiled.