Mean Green, the world's fastest hybrid truck, will attempt to reach speeds in excess of 165 mph. 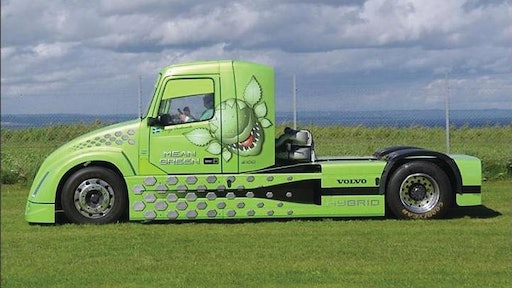 Mean Green, the "world's fastest hybrid truck", will attempt to achieve a new speed record at Wendover Airfield in Utah.

The cool factor of the truck aside, such an attempt is designed to underscore the capabilities that hybrid technology can offer. "Mean Green is a prime example of Volvo's technical capabilities and our continued focus on emerging technologies," states Ron Huibers, president, Volvo Trucks North American Sales & Marketing. "Our engineers developed the world's fastest hybrid truck utilizing the same Volvo hybrid drive system powering hundreds of Volvo buses throughout the world, including London's double-decker buses."

In building the Mean Green, the company's team of hybrid technology experts adapted Volvo's hybrid driveline to the chassis requirements of a vehicle built for speed. Engineers then outfitted Mean Green with a highly tuned Volvo D16 engine and a modified version of the automated I-Shift gearbox, which interacts with the hybrid's electric motor. In total, Mean Green generates 2,100 hp and nearly 5,000 lb.-ft. of torque; 200 hp and 885 lb.-ft. of torque come from the electric motor.

"The result is a lightning-speed boost from start-off without any of the customary diesel-engine delay," says Boije Ovebrink, Mean Green's owner and driver. "For the first couple of seconds, the truck just makes a slight whistle until the diesel engine, which runs on renewable liquid rosin diesel, starts delivering with explosive force."

Whether the attempt at a new speed record is successful or not, the company will have succeeded in promoting not only its own hybrid technology, but the potential of hybrid systems as a whole. With a significant number of suppliers introducing hybrid and alternative fuel vehicles and construction equipment, drawing attention to these systems in such a (literally) colorful way will help to educate future end users who may be otherwise skeptical about their capabilities and performance.