In the January 2015 issue of Concrete Contractor, we featured the Arctic Passage renovation project at the Henry Vilas Zoo in Madison, Wisconsin. The project is now complete and scheduled to open to the public on May 23, 2015. 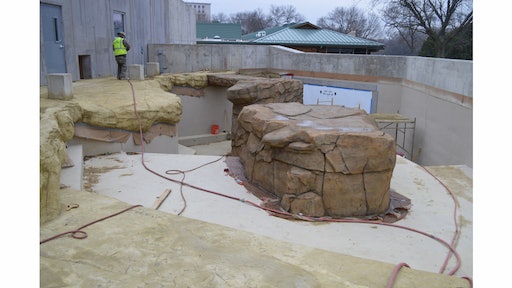 A 175,000 gallon tank for the seals is part of the new exhibit at the Henry Villas Zoo. Contractors used No. 3 rebar and wire mesh to create the structures. The Nassal Company has been subcontracted to perform the theming work.

One of the best things about my job as the editor of Concrete Contractor magazine is the opportunity to revisit projects we previously covered in the magazine. In the January 2015 issue, our cover story detailed the construction of a new exhibit for polar bears, grizzly bears and harbor seals at the Henry Vilas Zoo in Madison, Wisconsin.

This weekend marks the grand opening of The Arctic Passage and will open to the public on May 23. The exhibition is the largest renovation in the zoo’s century long history. Colored concrete walls, hand-stained theming work and a variety of forming systems helped create the new home for the animals.

Madison's local television station, Channel 3000, put together a series of clips highlighting the completed renovation which you can view here.

If you missed the story on how the contractor built this massive concrete structure, read the story here.

I Think Some Recognition is in Order

The new line of JLG Rough Terrain Scissors has an answer for every task. When we say upgrade, we mean business – yours.
July 13, 2021
Latest
Concrete Thoughts

The most popular stories from ForConstructionPros.com/concrete from November 2020.
Jonathan Kozlowski
December 9, 2020