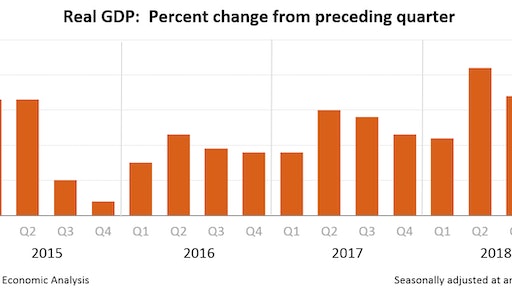 U.S. GDP growth has slowed consistently since it spiked around tax time last year, taking construction spending with it.

U.S. government bond prices surged Friday after data showed the European economy continuing to weaken and a Wednesday Federal Open Market Committee (FOMC) meeting in which the Fed downgraded its 2019 GDP forecast and paused its plan to raise interest rates two times in 2019. Threats to U.S. economic stability encouraged investment in 10-year bonds which depressed their returns below that of 3-month bonds. It’s a rare position known as “yield-curve inversion,” and the condition has preceded all U.S. recessions by one to two years since the 1982.

All three major U.S. stock market indices turned down on Friday on news of the inversion. The Dow Jones Industrial Average closed down 1.77% and the S&P 500 was down 1.90%, while the Nasdaq was off 2.23%.

Treasury bonds pay a fixed percentage return to the bond holder. Supply and demand for bonds bought and sold on the secondary market influence their price, so if investors are willing to pay $110 for a desirable $100 bond, for example, their actual yield on the investment decreases. “Inversion” is where the yield on bonds with longer maturities fall below that of bonds that mature in a shorter period.

[4-min. video on yield curve inversion] Why Investors Are Obsessed With the Inverted Yield Curve

Investors flock to Treasurys amid the surge in demand for safe assets. Buying bonds is also a bet that the Federal Reserve will cut interest rates this year in response to weakening global conditions.

Don’t panic. Our post-Great-Recession context has inspired various speculation about exceptions to long-held economic corollaries, and some suggest that fundamental economic expectations have shaken the expected connection between yield curves and recessions.

Considered more simply, a 12- to 24-month recession timeline is not a dramatic change from forecasts issued before last Friday.

There’s better news. Wells Fargo reports that the median FOMC forecaster now believes rate raising will be on hold for the rest of 2019, down from a median projection for two 2019 rate increases at their December meeting. The median forecast of one 25-basis-point rate hike next year remains, but seven of the 17 FOMC members think rates will be on hold next year as well. In other words, the forecast of a rate hike next year is a close call.

But yield-curve inversion is definitely not good.

The FOMC downgraded its assessment of the economy, saying that “growth of economic activity has slowed from its solid rate in the fourth quarter.”

Nonresidential construction outlays bounced back in 2018 from a small 2017 decline during a year when GDP grew 2.3%.

With FOMC forecasting 2.1% GDP growth in 2019, the economy appears to be settling down from the tax-cut sugar high that started in 2018. And as growth slows, you can no longer say that there are no indicators of a downturn ahead.

The Yield Curve Just Inverted, Putting the Chance of Recession At 30%

Morgan Stanley: Get defensive because the inverted yield curve is sending a message

Former Fed Chair Yellen says bonds could be hinting at a rate cut, not recession