Real US GDP grew 3.1% in the first quarter lead by strength in finance and insurance, retail trade and health care and social assistance 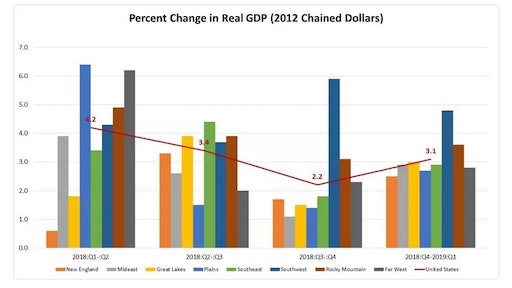 Regionally, the Southwest recorded the highest growth rates for the first quarter of 2019 at 4.8%.
National Association of Home Builders

The National Association of Home Builders reports real gross domestic product (GDP) increased in all 50 states and the District of Columbia in the first quarter 2019 compared to the last quarter of 2018. The U.S. Bureau of Economic Analysis (BEA) reported that real GDP growth rates, measured as a seasonally adjusted annual rate, ranged from 5.2% in West Virginia to 1.2% in Hawaii.

The BEA also reported that the construction industry contributed nothing to U.S. GDP growth in the first quarter.