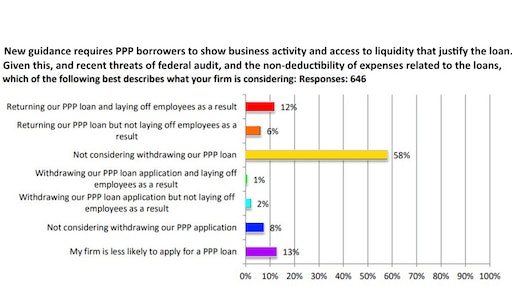 New guidance on May 13 from the U.S. Treasury Department and Small Business Administration on the Coronavirus Aid, Relief and Economic Security (CARES) Act's Paycheck Protection Program (PPP) clarified applications that qualified. The forgivable emergency loans are meant to support small businesses hurt by the coronavirus crisis. Construction firms took the largest share of any industry form the first tranche of funding, which was doled out in 13 days, so the clarification of eligibility for this program is important.

"I see the ‘imputed’ good faith necessity for all PPP loans under $2 million as being a very significant and positive development and likely unexpected throughout the business community,” says Ken Logsdon, a partner at the law firm Dorsey & Whitney who has been helping small businesses and banks navigate the program.

Treasury Department scrambling to understand how to administer the loans even as funds were running dry had created some challenges. Shortly after Treasury Secretary Steven Mnuchin promised PPP loan audits and warned of “criminal liability” for false certifications of need, an AGC’s Coronavirus survey found 82% of member contractors had been approved for PPP loans. Mnuchin’s comments came on the heels of finding that large publicly traded corporations had taken some of the first PPP loans, and subsequent guidance requiring borrowers to show at the time of application how their business activity and access to other sources of liquidity justify the loan. That same AGC survey measured 21% of contractors considering returning their loans or withdrawing applications.

"Any borrower that, together with its affiliates, received a PPP loan with an original principal amount of less than $2 million will be deemed to have made the required certification concerning the necessity of the loan request in good faith – thus, if a borrower received a PPP loan under $2 million and was otherwise eligible, but uncomfortable with the needs based certification should now be comfortable keeping the loan and applying proceeds as directed under the PPP.”

Treasury’s guidance document explained: “SBA (Small Business Administration) has determined that this safe harbor is appropriate because borrowers with loans below this ($2 million) threshold are generally less likely to have had access to adequate sources of liquidity in the current economic environment than borrowers that obtained larger loans.”

With so many PPP loans approved in less than a month, the approach will allow SBA to focus its audit resources on larger loans, where compliance-enforcement efforts can yield better returns.

"PPP loans greater than $2 million will be audited and PPP loans under $2 million remain subject to an audit. Does this mean that there remains a possibility that the SBA could very well determine that a borrower that received a PPP loan under $2 million ‘had access to adequate sources of liquidity,’ thus resulting in a requirement of repayment?’ Logsdon says. “This is unclear.

"The safe harbor only applies to the needs based certification and will not act as a cure for other deficiencies (e.g., if a borrower has determined that perhaps it is not eligible due to the nature of the business such as illicit activities, repaying the loan by May 14th would not act as a cure for such deficiency— nonetheless, such loan should be immediately repaid in order to mitigate potential damages).

“If a borrower lacked an ‘adequate basis for the required certification’ concerning the necessity of the loan request, SBA will seek repayment of the outstanding PPP loan balance and will inform the lender that the borrower is not eligible for loan forgiveness.”

The May 13 guidance also extended the safe harbor for loan returns to May 18. Borrowers of $2 million or more, or smaller borrowers who still have concerns about their applications, can return the funds with no questions asked.

Treasury has not yet clarified guidance on conditions under which PPP loans will be forgiven. Early SBA guidance indicated that PPP loans were designed to help businesses keep paychecks flowing, and would be forgiven if 75% of loan proceeds were used for payroll costs and 25% was used for overhead expenses such as mortgages, rent and utilities. The 75% payroll minimum isn't written in the CARES Act, and lawmakers on both sides of the aisle expect flexibility in that ratio to accommodate businesses with smaller payrolls that will naturally have relatively higher operating expenses. Senate Small Business Committee Chairman Marco Rubio told ABC News that there is "less agreement" on exactly how to remedy the problem.

AmericanBanker.com reports that the SBA’s inspector general wrote May 8, “Our review of data from round one (of PPP loans) found that tens of thousands of borrowers would not meet the 75% payroll cost threshold and would therefore have to repay the amount of nonpayroll costs in excess of 25% in two years.”