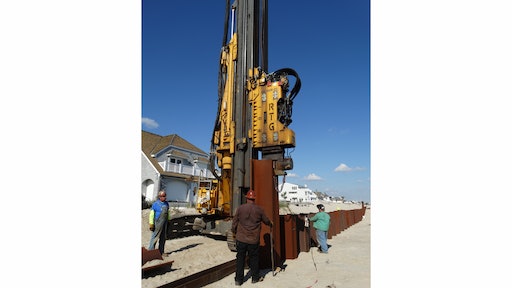 Installing over 3.5 miles of steel sheet pile wall along the New jersey beach to help reduce the damage future storms may cause on the coastline

As the 2014 hurricane season rolled in, a crew of workers from Springfield, N.J.-based EIC Associates was working feverishly to reduce, if not completely eliminate, the possibility that future superstorms would repeat history by installing just over 3.5 miles of steel sheet pile wall along the beach for the New Jersey Department of Environmental Protection’s (NJDEP) Bureau of Coastal Engineering. The keystone of the project was a pair of German-manufactured RTG Rammtechnik GmbH pile drivers rented from the Aldan, Penn., office of Equipment Corporation of America (ECA). The scope of this $23.5-million project – part of a much larger beachfill project by the United States Army Corps of Engineers (USACE) – entails driving the sheet piles and installing bent plate caps and geotextile anti-scour aprons. Project Manager Derek Serpe and Project Engineer John Caya are leading a gung ho team that works as if driven by a higher purpose.

The objective of this indomitable wall of steel is to protect a $265-million investment by the New Jersey Department of Transportation (NJDOT) in the 12.5-mile reconstruction of Route 35, initiated 10 years ago to address pavement distress and drainage issues along this coastal emergency evacuation route. The project was accelerated when Hurricane Sandy demolished the infrastructure. The wall will also exist to protect Mantoloking’s residents, homes and commercial buildings.

The thickness of the interlock between the cold rolled steel beams required the fabrication of customized jaws for the RTG pile drivers, according to ECA’s Sales Engineer Chas Raysik . RTG fabricated and shipped six sets of jaws from Germany to keep the project on track.

“I think the biggest obstacle we faced,” Serpe says, “were the large interlocks of these cold rolled sheets and the brittleness of sheets.” The interlocks of cold-rolled sheets are looser than those of hot-rolled steel. EIC needed a jaw design that would match the driving rate of hot-rolled piles, while reducing strain on the RTG pile drivers. The extra play in the interlock also required close attention so the caps would fit properly.

The sheer power of the RG 21 T pile driver can be felt as steel vibrates against steel high above. Dirk Himborg, RTG Rammtechnik’s Sales Director for North America, describes the operation. It starts with ensuring that the holes drilled in the sheet piles are symmetric so operator Rich Kaminski can properly hoist and set them in place with the RG 21 T. Once the hammer is properly positioned atop the pile, the vibrator ramps up to top speed and the descent begins. Because the sand is non-cohesive, the vibration essentially displaces the material in what he describes as a “fluid condition.”

The ground crew threads the chain through the sheet pile and interlocks the clevis into the rear of the hammer’s clamp housing. The RG 21 T almost instantly hoists the sheet into an upright 90-degree position and swings roughly 180 degrees to meet two workers positioned near the falsework in the sand. The sheet-pile is carefully guided into place before the vibration begins. There is barely a moment of downtime between pile driving and hooking up the next pile. Four factors drive these five-man crews: the RG 19 T and RG 21 T pile drivers; a critical path schedule; reducing impact to the neighbors; and competition between crews. The presence of two crews created this friendly competition.

“These rigs work in many environments,” Himborg says, competing with the reverberating sound of steel-on-steel. “This is a perfect job for a high-performance machine like ours because it’s a long stretch of sheet pile wall, and you can really maximize production.” The use of double sheets, he adds, doubles production time.

This $23.5-million project required $17 million in steel from Middletown, N.J.-based Skyline Steel, which mobilized a rotation of 15 truckloads from June 23 through Labor Day. “With this equipment,” Serpe said of the RTG pile drivers, “I can drive the sheets as fast as we can get them on the job.”

“Overall it’s been a great experience,” continues Serpe. “It’s much better than a traditional crane with a hammer.” From the clockwork-like handling of the sheets to the speed with which they enter the sand, it’s clear that the RTG pile drivers with high-frequency vibration enabled this level of production. Raysik chimes in, adding that a suspended hammer relies on the weight of the hammer, whereas high-frequency vibration capitalizes on both downward force and vibration.

Himborg says the RTG pile drivers feature an Automatic Self Leveling function to ensure that sheets are plumb, which is mandatory on this project. “During the driving process, the mast is being monitored,” he explains. “When the mast goes a bit off of being plum, it automatically comes back.” A ground man with a hand level verifies plumbness as the pile vibrates into the sand.

Steel I-beams pinned in the sand serve as falsework to ensure the plumbness of incoming piles. Serpe explains that keeping the sheets straight is critical to ensuring that the bent plate cap fits on top properly. “Most people that come out here and see a cold rolled sheet installed this straight want to go and shake the foreman’s hand,” he says, indicating that this is rare.

The worksite, framed by a towering dune and stockpiled steel sheets, is not much wider than a couple bowling alley lanes. The vibration, powdery consistency of the sand, and gravity constantly work to level the material, further narrowing the channel. A small fleet of excavators and bulldozers worked ahead of the pile driving operation to maintain the right-of-way.

“In this area, you can’t get any more of an easement or you’ll be in someone’s living room,” Serpe says. The wall was designed to follow the easement between the shoreline and the dunes, while adhering to residential property line setbacks, and tying into the future beachfill project. This required close coordination with the USACE and the NJDEP.

Working in the sand

Working on the beach presents unusual challenges, including wear and tear on the equipment. While gravity returns much of the fine white sand to the beach, it sticks to lubricated areas such as joints and within the tracks of the pile drivers. The resulting friction can be damaging, according to ECA’s Raysik. The salty air can also increase corrosion. Another challenge is the constant clogging of air filters by airborne sand, which reduces the performance of the equipment. EIC’s full-time maintenance crew fought this battle by blowing them out bi-weekly.

Mobility was the next challenge since wheels and tracks slide in soft sand. EIC increased traction along the work corridor with a geotextile fabric base topped off with crushed stone. “It’s an incredible amount of effort just to get the steel where you need to install it,” says Serpe of the sandy site. He attributes much of the credit to EIC’s skilled operators. The steel sheets – 45-foot-long-by-4.9-foot-wide – tip the scales at 7,000 pounds. Each pile was dragged by a bulldozer from a nearby staging area to its final destination.

The geotechnical aspect of this project is intriguing for anyone that has tried to drive a beach umbrella into soft sand. The surface layer is fine beach sand, below which is a layer of black sand, clay and an additional layer of fine sand. “It’s all about friction,” Himborg explains, indicating that the high water table is helpful. “When you come to a water-saturated area, it acts like a lubricant and facilitates the penetration process.” The steel sheets essentially displace the sand as they are driven.

The RTG pile drivers feature an active push system, according to Himborg, which allows the machine to plow through dense materials such as clay. The sand on this project was obviously no match for the RTG’s. While EIC occasionally encountered clay at the tip elevation, the pile drivers were met with little resistance. Drive time hovered between two and three minutes 95 percent of the time. He describes the situation as “putting the brakes on the hammer” when the sheet breaks through the clay below and needs to be stopped by the rig. Serpe indicates that the power of the RTG’s was the defining factor in punching through the heavy layer of clay beneath the beach.

EIC will not only deliver protection to the barrier island of Mantoloking, but the finished project will restore the beach to its original appearance. This is the first phase of a $300-million USACE beachfill project that will build up dunes, a berm and extend the beach by 200 feet between the Manasquan and Barnegat Inlets.

In early October, EIC attracted national media attention by unearthing a 19th Century shipwreck while driving piles with an RTG piling rig. A cease and desist order was issued to allow archaeologists and shipwreck historians to determine the identity of the old wooden vessel. At the time of this writing, it is believed this could be a Scottish ship known as the Ayrshire, which was carrying Irish and English immigrants to America. Two-hundred passengers were on the ship, and all but one were rescued. The investigation and further excavation on this portion of the jobsite continued alongside of the construction.