NDA members American DND Inc. and Empire Dismantlement Corp. save a building from collapse after 70 inches of snow falls in 72 hours 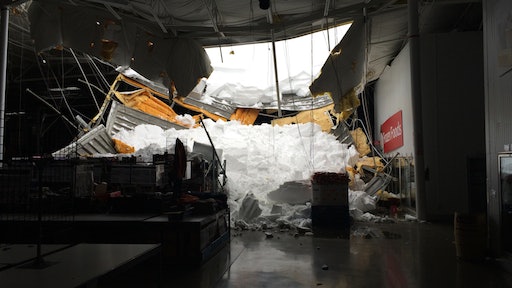 The roof of the building collected approximately 6 million pounds of snow from the extreme amount of snowfall in such a short time period. In some areas of the roof, the snow load was two to three times heavier than the roof loading was originally designed for.

In November 2014, a severe snowstorm in Buffalo, N.Y., produced more than 70 inches of snowfall in a 72-hour timeframe. BJ’s Wholesale Club, a 100,000-square-foot, Hamburg-based retail store, suffered a partial progressive collapse in the storm. In order to remedy the situation, the building needed selective dismantlement, demolition and a complete rebuild.

The roof of the building collected approximately six million pounds of snow from the extreme amount of snowfall in such a short time period. In some areas of the roof, the snow load was two to three times heavier than the roof loading was originally designed for.

The snow’s weight caused a progressive collapse in an approximately 10,000-square-foot portion of the roof system (girder trusses, roof panels, bar joists and building columns). Eventually, two bays of the building collapsed inward and, as a result, caused additional extensive structural damage to the remainder of the building’s roofs, columns and exterior walls.

NDA member Empire Dismantlement Corp. was one of the first contractors on-site to help remove snow from the roof and perform initial building stabilization and shoring installations.

Toward the end of the snowstorm, the town of Hamburg, the owner of BJ’s and the owner’s engineer acted quickly by first evacuating and shutting down the building and all critical utility systems (gas, sprinklers, water and electric) and then working to mitigate and stop the progressive collapse by installing temporary diagonal bracing at key vertical columns. Fortunately, the diagonal bracing worked, and the snow stopped before the entire building collapsed. But, it had already suffered extreme structural damage that affected the entire building’s structural integrity.

The owner worked proactively to save the building by collaborating with the town of Hamburg to rebuild and upgrade the structure to current building codes. The owner hired New York State licensed professional engineer John Schenne, P.E., and NDA member American DND Inc. to act as the overall safety and health coordinator and construction manager lead for the project. American DND possesses unique skill sets with its “nuclear safety culture” and organizational talents; it was the perfect fit to manage such a complex project.

Within one week, BJ’s hired the project team, and the challenge of completing the work as quickly as possible to beat the impending debt of winter and save the structure from further collapse began.

The first order of business was to stabilize the entire structure and collapsed zone by shoring and bracing the roof and building columns in order to safely continue selective dismantling and to save millions of dollars in the club’s inventory. More than 100 different 20,000-pound capacity shoring towers were installed throughout the project, in addition to diagonal cabling and turnbuckles to stabilize and secure the building from future collapse and progressive failure. After the building was safe and secured, the project team was able to fully assess the structure’s condition.

A thorough structural investigation determined that the building’s existing construction contained numerous deficiencies, including missing lateral and diagonal bracing and various roof girder truss and bar joist deficiencies. The team was then challenged with dismantling the roof portion that had collapsed and straightening the building, in addition to fixing deficiencies from the original construction and rebuilding the structure to meet the new Building Code Roof Loading Criteria of 50 PSF versus the old Building Code of 30 PSF.

On top of those challenges, the team performed the work in the December to January winter weather in Buffalo, and executed on a 24/7 schedule in order to reopen as soon as possible and return the club to normal operations.

BJ’s immediately removed all inventory and donated 17,000 pounds of food from its freezers to local food pantries before beginning repairs. The project team started installing a temporary roof and walls around the collapsed zone, because the roof was now open to the winter weather. The BJ’s team removed over 100 truckloads of inventory, saving millions of dollars worth of inventory in less than seven days.

At the same time, the engineer performed the structural designs to repair the roof and existing columns, and the collapsed portions of the building were dismantled in preparation of straightening the structure back to its original position. The walls and columns were brought back to plumb and square so rebuilding efforts could start.

Dismantling, demolishing and straightening the building were critical, but it was also necessary to analyze the effects of original construction shortfalls and other building deficiencies using specific activity hazard assessments (AHAs), work plans (WPs) and work instruction packages (WIPs) with safety hold points.

The straightening of the building involved careful planning, sequencing and coordination to move some of the existing walls, columns and girder trusses as much as 12 to 18 inches to bring them back to square and plumb. Virtually all girder trusses, bar joists and vertical columns were inspected and reinforced to ensure the rebuilt structure would be secure for BJ’s customers. This was a “design, build, deconstruct and reconstruct project on steroids,” says Josh Isenhour, American DND’s on-site coordinator.

The BJ’s building was also part of a much larger commercial shopping plaza and retail area; as such, the project also involved life, fire and safety concerns regarding the sprinkler system and fire protection during the dismantling and reconstruction work. The fire sprinkler system was temporarily reworked from three zones down to two in order to reactivate the system and provide active fire protection to the entire structure. Numerous walk downs and inspections with the local fire departments and town fire marshal provided open and transparent communication with all stakeholders; helped mitigate fire loading in the building; and kept the project safe for the construction workers and all other plaza occupants throughout the entire project.

New structural repairs and building upgrades were extensive and required installing a combination of all the following items:

Because BJ’s was an existing building, the as-built original construction drawings were not available, and all steel columns and braces had to be cut to fit and custom fabricated to meet the engineer’s design. To facilitate this need, an on-site steel fabrication shop was set up, complete with lighting, equipment and million BTU heaters to help with quality control, steel preheating and welding inspection requirements.

A 400-ton hydraulic crane with up to 300 feet of boom was on-site, along with smaller cranes and material handlers to help with moving around and placing the steel columns and beams weighing up to three tons each.

Replacements and upgrades occurred following the structural repairs to the building. The roof hole was patched and replaced with new standing seam roof panels and all mechanical, electrical, plumbing, sprinkler and gas piping systems were either repaired or replaced. A new sub-zero, walk-in freezer was also installed to replace the one damaged by the roof collapse.

In the end, all work was performed safely, efficiently and as quickly as possible. The project team achieved its safety goal of zero OSHA days away, restricted transferred (DART) and zero lost-time accidents.

This project highlights the unique and diverse talents of two NDA members and highlights the importance of teamwork, cooperation and professionalism in the face of pending disaster. The vast skill sets and capabilities of both NDA members American DND Inc. and Empire Dismantlement Corp. saved the BJ’s Wholesale Club building.

Together, the companies successfully performed selective dismantlement/demolitions of the collapsed portions of the building, followed by performing structural repairs and rebuilding the entire structure within 75 days. These actions resulted in the grand reopening of a new and improved BJ’s Wholesale Club for all its members in Western New York.

Lea Stendahl shares her path into the industry and the opportunities she sees for other women in construction. She also highlights Suffolk's "Rebuild the Ratio" campaign to not only get more women into the company but more girls into STEM careers.
Becky Schultz
April 12, 2021
Follow Us