The Heat Was On During University of Minnesota Demolition Project

Carl Bolander & Sons Co. faced many known and unknown challenges during demolition of the University of Minnesota’s old heating plant 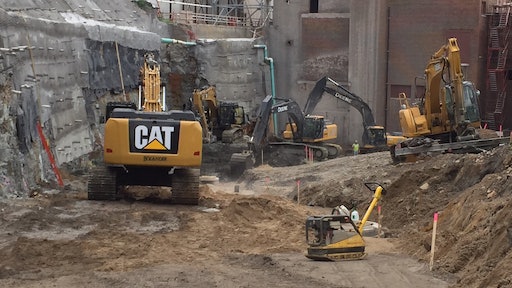 Built in 1912, the main heating plant on the University of Minnesota campus was nearing the end of its service life when it was shut down and mothballed in the year 2000. Prior to that, it was the main source of heat for the campus and later housed a maintenance shop. Due to the age of the facility, new emissions requirements, and the need for additional heating and power capacity, the university needed to invest in a new system. The new combined heat and power (CHP) plant would meet 100% of the campus heating requirements and supply more than half the required electrical power, saving money by utilizing environmentally friendly technologies. A new dual fuel combustion turbine generator and heat recovery steam generator were installed in the shell of the historic old building.

The building is located along the Mississippi River between downtown Minneapolis and the University of Minnesota campus. Residents and the city were concerned with the potential aesthetics, smoke from the stack, noise from the plant operations and environmental impacts to the river. The design team, working in conjunction with contractors, was able to design and install what is ultimately a functional, energy-efficient and beautiful new site. The stack is adequately covered by screen walls, and the brush and rock face of the riverbank have been beautified with a state-of-the-art, multipurpose slope wall. The site surfaces were reconfigured and updated to enhance the shoreline. The building upgrades have improved the overall appearance of the site and power facility, which would usually be seen as unsightly necessities.

Removal of the structural roof, floors, columns and beams had to be completed in a specific sequence in order to maintain the structural integrity of the building until new structural components could be installed.National Demolition AssociationThe construction portions of the project were solicited from a short list of competitive bidders, followed by interviews to determine the best value offer from the proposals accepted. National Demolition Association (NDA) member Carl Bolander & Sons Co. was chosen through this process for the demolition, earthwork and utility scopes of work.

The University of Minnesota has been a highly valued client of Bolander for years. The company has continuously performed work on the campus for over 10 years. The relationship is one of mutual respect and teamwork. Bolander routinely collaborates to develop accurate cost estimates, viable execution strategies and flexibility in adhering to schedules, all within the context of providing a safe work environment.

Involvement and cooperation from the staff of University of Minnesota, design engineers/architects and the personnel of Adolfson and Peterson created a strong working partnership. Their can-do attitude and input on challenging design elements were invaluable. Without those partnerships, the streamlining of design, coordination of work and other critical work elements would not have gone as smoothly. From conception through completion, everyone’s input was vital to the overall success of the project. All of the participants gave extensive time and talent to ensure the precise execution of each phase of work.

Bolander’s involvement in designing components was significant. The company was instrumental in the engineering and sequencing for the structural demolition inside and outside of the building. Bolander provided the design of the micro-pile necessary to support the critical components of the power plant and was a major contributor in the design and construction of the slope wall and new site shoreline restoration. It also collaborated on all drainage, sanitary and water service design, which required coordination with demolition operations and the installation of the new wall.

The existing structure was completely gutted. This included walls, ceilings, mechanical-plumbing-electrical systems, combined asbestos abatement and demolition of the seven six-story boilers, piping, tanks, vessels, pumps, miscellaneous equipment, and a massive concrete coal bunker suspended at roof level. Removal of the structural roof, floors, columns and beams had to be completed in a specific sequence in order to maintain the structural integrity of the building until new structural components could be installed.

The demolition on the project recycled 8,400 tons of concrete and bituminous and 1,160 tons of steel, resulting in an 86% recycling rate.All nonstructural demolition and dismantling operations were completed prior to starting the structural demolition. Sequencing the work to allow other trades to also work inside the building required working from the top down in some areas and down-up in other areas. Sequencing the work locations strategically also created optimum access for hoisting and handling demolition materials.

Once all but the shell of the building was gutted, the new dual fuel combustion turbine generator and heat recovery steam generator were installed. Interior micro-piles and new deep footing pads were installed to support the massive new equipment. The site was repurposed to solve ongoing limestone riverbank erosion issues and facilitate the current and future construction plans.

Due to the project’s location at the bottom of a steep rock face, the only access road was winding, steep and narrow. A completely new access road was constructed through massive retaining walls, requiring the delicate demolition of the existing walls during the installation of shotcrete soil nail walls to hold the cliff face. At its tallest point, there is a 75-foot elevation change from top to bottom.

During the staged demolition and construction of the shotcrete soil nail cliff face retaining wall, Bolander encountered several conditions that it had not anticipated. Old and unpurged oil lines were found ruptured, requiring rapid deployment of containment measures in order to prevent the discharge of contaminants into the Mississippi River. Multiple areas of asbestos contamination were encountered, requiring proper protection, handling and disposal. A large existing buried wall was discovered, requiring stabilization and reinforcing utilizing hollow injection bar soil nails, shotcrete. These were all included in the final design prior to committing to a work plan; this saved money for the owner, while protecting natural resources for the local community.

The interior demolition operations required the use of numerous electric hoists, block and tackles, winches, small lightweight man lifts, scaffolding systems, mini-excavators, skid steers, robotic tools, hand tools, and complicated rigging systems to safely dismantle and handle the demolition materials.National Demolition AssociationBolander worked over 44,000 safe hours on this project with staff ranging from four to 12 workers daily. The company’s countless efforts to keep employees and others safe are reflected in the statistics: There were over 2.7 million safe hours without a lost time incident, reducing the EMR to 0.64, a remarkably low rate for this industry. When developing all processes and evaluating means and methods for this project, Bolander relied heavily on its safety director to provide input, adjusting its initial ideas and approaches to execute the work in the safest manner possible.

Bolander’s organizational commitment to the environment has been a cornerstone of the company’s heritage. Beginning in the 1970s, Bolander was the first contractor in the greater Minneapolis/St. Paul area to recycle aggregates reclaimed from demolished buildings and pavements. This commitment to responsible contracting has been a foundation of its success for over 90 years. The means and methods employed during this project have been highly effective in the overall recycling, repurposing and waste reduction during all phases of the work. The demolition on the project recycled 8,400 tons of concrete and bituminous and 1,160 tons of steel, resulting in an 86% recycling rate.

The project faced many design changes and constructability challenges. The adjustments made in collaboration with the general contractor, owner, design team and Bolander resulted in a project that was completed safely, efficiently and respectfully, and produced a final product that resulted in a very happy owner. Both the owner and the general contractor said they would be happy to work with Bolander in the future. These accomplishments are the cornerstones of the success of the company.

EPA Is Now Allowing Asbestos Back into Construction Materials

Construction backlog was down in October from the same time one year ago but up for the month, indicating a level of industry stability.
Associated Builders and Contractors Inc. (ABC)
November 11, 2020
Follow Us